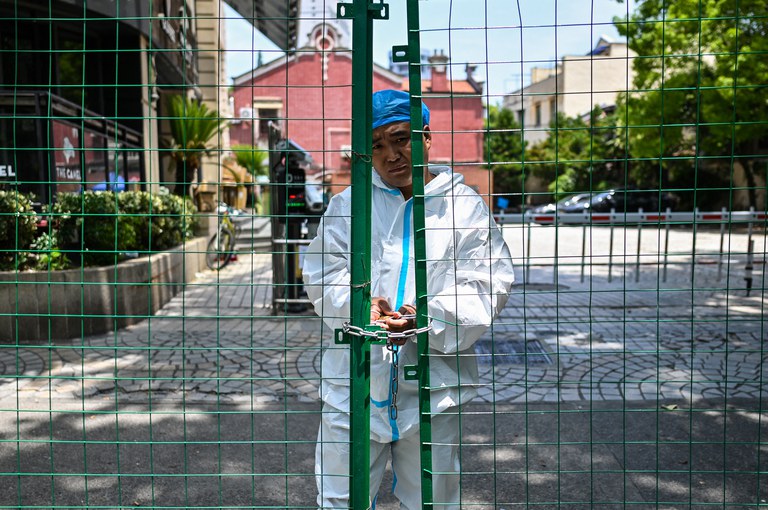 Despite the government’s claims that a two-month lockdown in Shanghai has been relaxed, residents of some districts of the city said they have yet to regain their freedom, amid ongoing shortages of food and other daily necessities.

A resident of Shanghai’s Jing’an district surnamed Feng said some residential areas of her district, as well as some of Xuhui and Huangpu districts, remain under “closed-loop” management, while the lockdown in Yangpu district has yet to ease at all.

“We are still locked down due to the pandemic,” Feng said. “Anywhere that somebody tests positive is still being locked down.”

“The lockdown never ended in Yangpu district, where they were still installing barriers on May 29,” she said.

Shanghai resident Wang Ning many factories are now unable to operate due to shortages of supplies and road closures, while many restaurants are still only offering takeout.

“Some people are back at work one day, then take three days off,” Wang said. “We are doing PCR tests nearly every day.”

“There are rumors that there will be another lockdown from June 20, so we laid in a lot of supplies yesterday, so as to be prepared if that happens,” Wang said.

But any trip outside one’s home, even in districts where this is now allowed, must be preceded by hours of lining up to get a PCR test, Wang said.

“There are PCR testing booths at the entrance of our community, saying that we need to show a negative test from the past 48 hours to leave,” Wang said. “I did one last night, so I can go run a few errands today.”

A resident surnamed Ma said that standing in line for PCR tests is the bane of people’s existence now in Shanghai.

“It’s a constant sword hanging over people’s heads … because you can’t go anywhere without a negative PCR test from the past 48 or 72 hours,” she said.

“The fact that the results don’t usually come out till the next day is very troublesome for people, and creates anxiety,” Ma said.

“We are constantly lining up to do PCR tests,” she said. “Anyone who tests positive will be put in isolation or lockdown at home.”

“All of this is a disaster for ordinary people … these tests cost 20 yuan a time, and they have to do one every couple of days, so how will they afford it?”

A Shanghai resident surnamed Chang said the city isn’t back to normal yet.

“You can only say that the lockdown has been partially lifted,” Chang said. “Some places haven’t gotten back to normal yet.”

While authorities in Beijing also announced the easing of weeks of restrictions in the early hours of Tuesday, public transportation in the city remains suspended, and people are being told to work from home.

“We can only walk around the Fangshan area, as we don’t have a car,” Guo said. “There are parts of the subway where the trains aren’t stopping, and Fengtai district is still under lockdown.”

Guo said people are being asked to pay high fees for documentation allowing them to leave their residential compounds.

“It costs 240 yuan to get an exit pass in our compound now,” she said.

A man surnamed Guo from Haidian district said parts of the district remain under tight restrictions, with several PCR tests required from residents ever week.