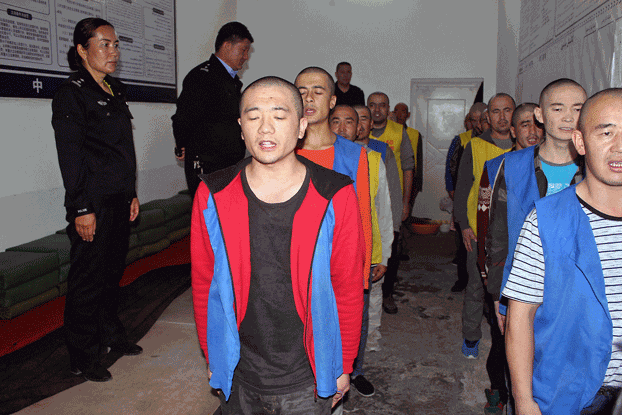 Rabigul Haji Muhammed was stunned to see a former classmate on a leaked list of Uyghurs and other Turkic people detained in internment camps in China’s far-western Xinjiang region.

The doctoral student in Turkology at Hacettepe University in Turkey was searching through a trove of classified documents published by a U.S.–based human rights group in May. One of the group’s researchers had been given the information from an anonymous source.

Muhammad saw that Nurali Ablet had been detained for “engaging in online propaganda about violence and terrorism.” Ablet majored in the Uyghur language at the Central Nationalities University, also known as Minzu University, in Beijing and graduated in 2015, she said.

“I knew him very well from those five years in college. He was a very hard-working and active student at the university,” she told RFA. “People like Nurali are not just images for us, they are living beings like us and everyone else.”

Muhammad and other Uyghurs living in exile have scoured the Xinjiang Police Files since the document was first published by the Washington, D.C.-based Victims of Communism Memorial Foundation on May 24, searching for information about missing relatives or friends, or on the off chance they might know someone who unbeknownst to them had been detained by Chinese authorities.

Many say that the abducted Uyghurs are college-educated, law-abiding and working-class –– not “terrorists” in any sense of the word.

The files were analyzed and authenticated by a team led by Adrian Zenz, a researcher at the foundation who is an expert on the region. They were peer-reviewed by scholarly research and investigative teams from several major global media outlets.

The documents include clear images and detailed information about camp detainees who were arrested in 2018 in Kashgar Kona Sheher (in Chinese, Shufu) county in Kashgar (Kashi), a southern city in the XUAR.

Among the county’s more than 3,700 detainees labeled as “trainees” in Chinese government documents, the youngest is 14 years old, and the oldest is 73. Some photos show police minders wielding batons standing next to the detainees.

Previously leaked Chinese government documents contained only the names and identification numbers of some detained Uyghurs. The new information includes photos and more information about their alleged crimes.

The documents also describe a “shoot to kill” directive should the trainees try to escape what the Chinese government has called “voluntary vocational training centers” and the Chinese media has described as ordinary places of education.

In one of the leaked documents, Chen Quanguo, former Chinese Communist Party secretary of the XUAR, said in a classified speech in May 2017 that if that “if they [trainees] try to escape, shoot them on the spot and report back later.”

“The Xinjiang Police Files prove that China’s so-called vocational training centers are really prisons,” said Andrew Bremberg, president and CEO of the Victims of Communism Memorial Foundation, in a statement issued in May.

“These documents conclusively demonstrate that Beijing has been lying about its gross human rights violations in Xinjiang,” he said. “The international community must take immediate and concrete action to hold China accountable for these atrocities.”

The police files were obtained by a third party through hacking into computer systems operated by the Public Security Bureau in Kashgar Kona Sheher country and in Tekes (Tekesi) county in Ili (Yili) Kazakh Autonomous Prefecture. Both areas are dominated by Uyghurs and other predominantly Muslim ethnic groups.

“These findings are significant because they provide us with frank policy implementation directives along with the thought processes and intentions that made them a reality,” Zenz said in the statement.

“This gives an unprecedented look into the personal attitudes of Chinese authorities and the personal involvement of [Chinese President] Xi Jinping,” he said. “Documents with this kind of insight have never before been published and their revelations are very disturbing.”

The leaker, who managed to access some of the encrypted material, attached no conditions to the provision or publication of the documents, though the person requested anonymity due to safety concerns.

According to the files, Tajigul Tahir’s son was sentenced to 10 years in prison in 2017 for being a “non-alcoholic and non-smoker” — signs, according to authorities, of his extremism. The 60-year-old woman was later arrested herself because she was the mother of an imprisoned Uyghur.

Abdurrahman Qasim, a Uyghur based in Turkey, said he found the name of his former cellmate, Mehmutjan Nasir, in the leaked documents. They were in detention together in Hotan (Hetian), another city in southern Xinjiang, but met each other previously in Hotan when Nasir was a student at the Hotan Uyghur Medical College.

Authorities detained Nasir in 2010 for communicating with people who prayed. A few years earlier, he had posted his Chinese national identification card on WeChat, a Chinese instant messaging social media app, of which Qasim took a screenshot. Qasim said he was able to find Nasir’s ID details when the files were published.

“I searched the images in the files for people I know or any relative who might be among the images, and after looking at more than 1,000 images, I found Mehmutjan Nasir who was my cellmate in Hotan from late 2010 to early 2011,” Qasim said. “I was very saddened to find him on the detained Uyghurs’ list.”

Beijing had denied the existence of detention facilities in the XUAR until fall 2018 when it claimed that they were “vocational training centers” voluntarily attended by “students” to study Mandarin and the law and to obtain new skills.

But the government has continued to deny repeated and credible accusations from multiple sources that it has tortured people in the camps or mistreated other Muslims living in Xinjiang.

A U.S.-based Uyghur who requested anonymity to speak freely without fear of reprisal said he recognized from the leaked pictures of Uyghur detainees the son of his former teacher.

“I found Nabijan Yusuf, who was the son of my elementary school teacher,” he told RFA. “I knew him Nabijan when he was a child. Later he went to Tianjin University. By looking at all the images I concluded that the Chinese government targeted more Uyghurs who were born in 1980s and ‘90s than other generations.”

Nursimangul Abdureshid, a Uyghur living in Turkey who lost contact with her parents and siblings in Kashgar Kona Sheher country in 2017, searched for information on her family in  the Xinjiang Police Files.

Abduweli Ayup, a Uyghur rights activist and researcher based in Norway who is originally from Kashgar Kona Sheher county, recognized Tajigul Abdurusul and Iziz Atawullah, two Uyghurs who had been county primary school teachers for more than 20 years.

He also found a photo of his classmate, Matyar Ghopur, who used to work at the country’s water bureau, whom he described as a humble and calm person.