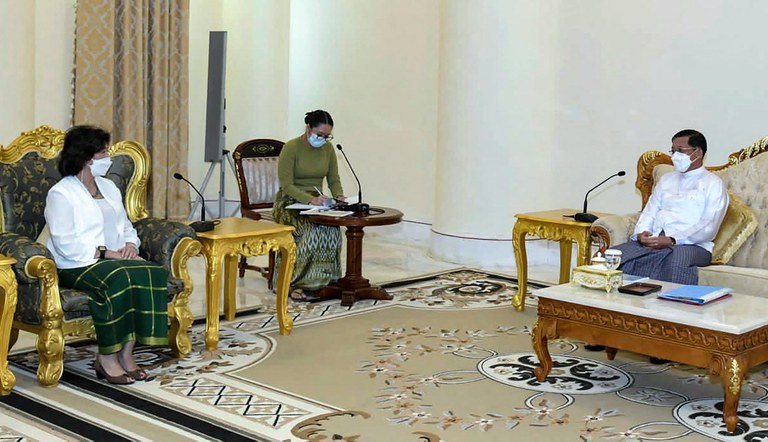 Myanmar’s shadow National Unity Government (NUG) and more than 850 civil society groups called on the United Nations to remove its appointed envoy to the country after her visit last week and demonstrate a “serious commitment” to resolving the nation’s worsening humanitarian crisis.

U.N. Special Envoy on Myanmar Noeleen Heyzer traveled to Myanmar from Aug. 17-18 and met with junta chief Snr. Gen. Min Aung Hlaing in the capital Naypyidaw. She urged him to end violence against the country’s civilian population, stop imposing the death sentence and release the country’s political prisoners, according to a statement from the U.N.

But opponents of the regime expressed doubt that the visit would change conditions in Myanmar and warned that it risked giving legitimacy to the regime, which ousted the democratically elected National League for Democracy (NLD) government in a Feb. 1, 2021, coup.

On Tuesday, Kyaw Zaw, the spokesperson for the office of NUG President Duwa Lashi La, told RFA Burmese that the U.N. should have presented the junta with a list of consequences if it fails to implement Heyzer’s demands.

“[Her demands were] nothing unusual, but she should have told [Min Aung Hlaing] what kind of action would be taken or what was planned if he didn’t comply,” he said. “Only then would it be viewed as a meaningful meeting.”

Kyaw Zaw’s comments came a day after 864 civil society groups issued a joint statement urging the U.N. General Assembly to remove Heyzer ahead of its session next month.

“We … call on the U.N. General Assembly to withdraw the mandate of the special envoy on Myanmar,” said the statement, the signatories of which included hundreds of pro-democracy organizations both inside the country and abroad.

“We also call on the U.N. Secretary-General [António Guterres] to show his serious commitment to resolving the devastating human rights and humanitarian crises in Myanmar by assuming a personal role on Myanmar and taking decisive action.”

The civil society groups called Heyzer’s visit the “latest evidence of the historical ineffectualness of the mandate over a decades-long approach that has continually failed” and demanded that the U.N. “immediately end its business-as-usual approach” toward Myanmar.

“The long history of the U.N.’s attempts at peace-brokering with Myanmar’s military through special envoys has never catalyzed into meaningful results, but has instead lent legitimacy to perpetrators of international atrocity crimes — and has permitted worsening human rights and humanitarian crises,” the statement said.

The groups urged the U.N. to transfer the issue of Myanmar from the Security Council to the International Criminal Court and called for the formation of a special tribunal to carry out an investigation of the situation in the country.

In a statement issued after her trip to Myanmar, Heyzer detailed the demands she made during her talks with Min Aung Hlaing and dismissed claims that her trip would lend legitimacy to the junta. The junta called Heyzer’s statement “one-sided” for having failed to include Min Aung Hlaing’s comments during their discussion.

“[The U.N.] may have hopes for some progress — a discussion has been held — but the U.N. was not very positive, and the way the U.N. approached the talks was not very acceptable to the junta,” he said. “We will have to wait and see if there will be further discussions.

“The U.N. Security Council should take additional action, especially through punitive measures, if the junta fails to [comply],” he said.

The Association of Southeast Asian Nations (ASEAN), of which Myanmar is a member state, has also repeatedly tried and failed to bring the junta to heel since last year’s coup.

At an emergency meeting on the situation in Myanmar convened by ASEAN in April 2021, Min Aung Hlaing agreed to implement the conditions of the so-called “Five-Point Consensus (5PC),” which calls for an end to violence in the country, constructive dialogue among all parties, and the mediation of such talks by a special ASEAN envoy. The 5PC also calls for the provision of ASEAN-coordinated humanitarian assistance and a visit to Myanmar by an ASEAN delegation to meet with all parties.

Even Min Aung Hlaing acknowledged that the junta had failed to hold up its end of the bargain on the consensus in a televised speech earlier this month, which he blamed on the coronavirus pandemic and “political instability.” He promised to implement “what we can” from the 5PC this year, provided it does not “jeopardize the country’s sovereignty.”

At ASEAN’s 55th Foreign Ministers’ Meeting in Phnom Penh from July 31 to Aug. 6, most member states criticized the junta for failing to adhere to the 5PC and for its July 25 execution of four democracy activists, including former student leader Ko Jimmy and a former NLD lawmaker.

However, the country’s opposition groups have criticized the bloc for what they say is its failure to adopt stronger measures in its dealing with the junta.