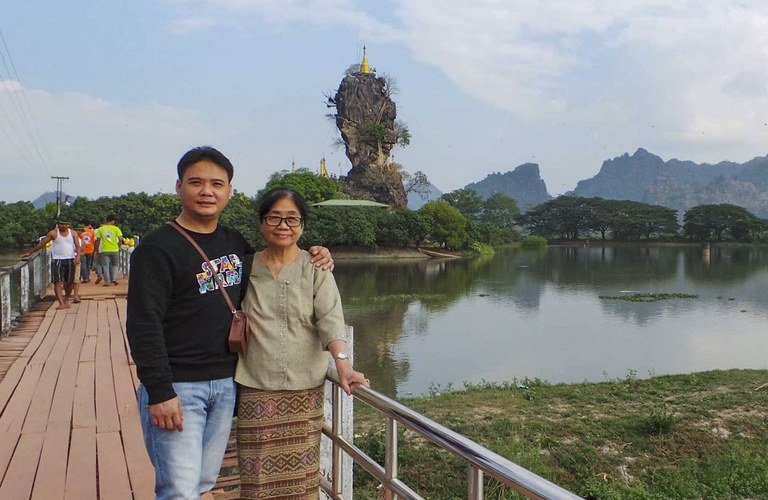 Hours after the terse announcement by Myanmar state media on Monday of the execution of veteran democracy activist Ko Jimmy, former National League for Democracy lawmaker Phyo Zeya Thaw and two other activists, RFA Burmese spoke to Nilar Thein, Ko Jimmy’s widow, and Phyo Zeya Thaw’s mother, Khin Win May, about their final interactions Friday with their condemned loved ones.

RFA: What have you heard about Ko Jimmy?

Nilar Thein: The deputy warden notified us that the execution had been carried out. When I asked for the return of his body, he said the prison laws do not permit such requests.

RFA: What do you want to say about this?

Nilar Thein: The entire population of our country is facing arbitrary arrests and all kinds of violence and repression. I would say the execution of four people including my husband and Phyo Zeya Thaw was blatant murder.  As I have said in the past, they will have to pay one day for each and every crime or whatever they have done. I didn’t say that without a reason. One day, the perpetrators will meet the fate and punishment they deserve for the actions they have committed. Another thing is my husband Ko Jimmy stood by his commitment and loyalty to the people until his last breath. He has written a good record for himself and he will never die in our hearts. He will forever live in our hearts, in the hearts of all the people, as a hero.

RFA: What plans does your family have now following this execution?

Nilar Thein: We are not holding a funeral for him because we do not accept their actions (of the junta). There is no plan for a funeral.

RFA: Did you receive any responses from the international community?

Nilar Thein: The EU Ambassador, the former U.S. Ambassador Derek Mitchell and some other ambassadors have contacted me. I explained to them about the latest situation up to the confirmation of the Prisons Department. It is stated in the prison manual that the body of the person who receives the death sentence has to be returned to the family. Only in cases when the family cannot be contacted do they take care of the body. I am now trying all steps necessary to get back the body.

RFA: Did they say anything about the possible execution when you met him on Friday?

Nilar Thein: We learned that the deputy warden had said things would  be done in accordance with the prison manual, but when it would be carried out was not known yet. When we talked on Friday, Ko Jimmy asked me to deposit some money (to buy provisions) and the prison officials said the money could be deposited on Monday. And this morning when we went to the prison, we heard the news.

RFA: What did you talk about at the meeting on Friday?

Nilar Thein: He said his health was good and that we don’t need to worry about him over whatever we heard from the outside. He told us to take care of our health. He said he had the Dharma in his heart.

RFA: We heard this morning that you went to Insein Prison and asked about your son Phyo Zeya Thaw’s case. What did you learn there?

Khin Win May: I went there only this morning when the news came out. I wanted to know for sure what the truth was. I actually had a plan to go and deposit some money for him today in Insein. When I met him on Friday, I didn’t have time to make a deposit and planned to do it today, Monday. First at the prison gate, I asked them if it was true as published in the news and they said yes, just like in the newspapers. What was written in the newspapers was not clear. I wanted to know if it was really true, on what day and when it was carried out exactly.

We are not atheists. We need to do our funeral rites, according to the Buddhist tradition. At first, they just said it was like in the newspapers and refused to let me in. Later on, I insisted that I wanted to see the responsible officials. I told them I wanted the details and only then they let me see the official.

RFA: What did the official tell you? How did he explain it to you?

Khin Win May: I asked him if it was true my son had been executed and he said yes. In fact, the family was allowed to see him on Friday and I was so happy to see him hoping the path is clear (for the future). It was the first time (since the arrest). I told the official that I really welcomed the meeting, that I was so happy to see him bright and cheerful and healthy, and that I had no idea that day the execution would take place. And the Insein Prison authorities read out to me the prison procedures. When Ko Jimmy and my son were first sent to prison, they submitted appeals to the State Administration Council. They sent the appeals twice and were rejected both times. And now the authorities were reading out all the prison procedures.

So I asked him if the death sentence were to be carried out when he said things would be done according to prison procedures. And he said he couldn’t say that exactly. But he said he would let us know in accordance with the rules of the prison which day or when it were to be carried out. If I only knew it that day, I’d understand that would be the last time we saw each other. My son didn’t know that it was our last meeting either. He even asked me to bring some personal things on my next visit.

RFA: So was it confirmation that the death sentence had been carried out?

Khin Win May: Yes, of course. I asked if it was true, on what day did the execution take place? When was it carried out? Because we have to do the Buddhist funeral rites and rituals. And he told me to just assume it was one of the two days, Saturday or Sunday. And I said I need to know which day it was actually done. He should be telling me it was on Saturday or on Sunday, and when and what time they did it. But he kept on saying we should just make a guess. Then I asked about the body. He said they don’t usually return the body. If that’s the case, can I get his ashes, I asked. I want to inter his body, if possible. And to that he also said no.

RFA: As a mother, what do you want to say about losing a son like this?

Khin Win May: My son was not a thief or a thug. I am proud of him for giving his life for the country. I’m really proud of my son. If I could get his ashes or remains, I would like to make a tomb for him and then put an inscription on it.

RFA:  Since you haven’t received any photographs or evidence that he has been executed, what would you like to ask from the responsible people?

Khin Win May: I’m not going to ask for anything. It’s my karma. My son had to die because he was fated for time, for this day. I will be 76 years old soon. I will only have to work for a better life (after this one), right? I’m not going to do anything. I send my love to all living beings. I pray on my son’s behalf that all the people of Myanmar and all the people of the world will be healthy and safe.