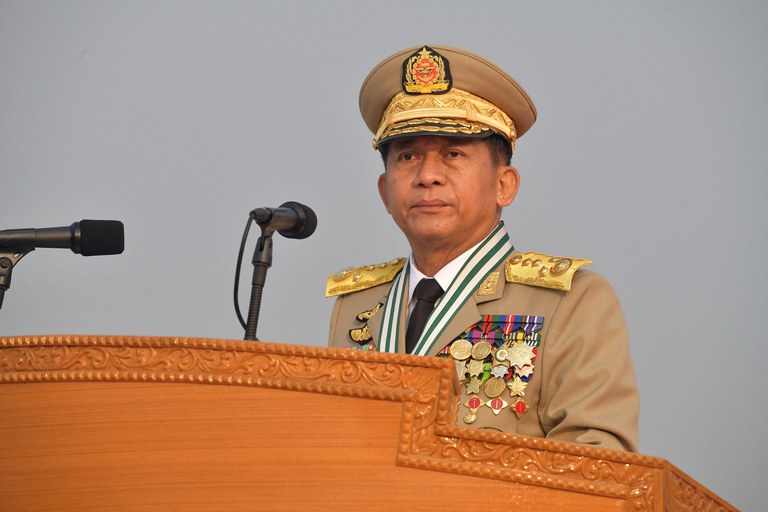 Why would Myanmar’s junta risk fueling more anger at home and outrage abroad through its execution on Monday of four activists, including two icons of the democracy movement? The answer might be found in its failing fortunes on the battlefield amid a deepening civil war.

The four had been arrested for their anti-junta activism and violating the counter-terrorism law.  In January, the four were accused of helping carry out “terror acts” and sentenced to death, despite the fact that Myanmar had not carried out a judicial execution in over 30 years.

Many had thought that that the death sentences were a ploy. The junta, it was assumed, would not risk the diplomatic backlash and popular protest that are likely to ensue. This was a card to be played diplomatically at the right time in a bid to gain international legitimacy – possibly by commuting the death sentences to win credit.

Besides, if the junta has had any success since its February 2021 coup, it’s been on the diplomatic front. Why would it jeopardize the fact that no government has cut off ties?

Considering that some 50 people that had died in military custody since the coup, according to the Assistance Association for Political Prisoners, the military had ample time and opportunity to kill the four.

So why now? There can only be one answer.

Myanmar’s military is spread dangerously thin. They are fighting a multifront war across the country. They are fighting well-trained and well-armed ethnic resistance organizations (EROs) such as the Kachin Independence Army and the Karen National Liberation Army, both of whom are allied with the opposition National Unity Government (NUG).

The NUG itself has some 275 People’s Defense Forces (PDFs) spread throughout the country. Though they have limited resources and armaments, they have succeeded in capturing vast quantities of weaponry, and are now starting to manufacture their own armaments and ammunition. The NUG and affiliated EROs now claim to control roughly 50% of the country.

And things might get a lot worse for the military, which is on the verge of renewing hostilities against the Arakan Army, with which it has had a tenuous ceasefire since November 2020 after two years of bitter fighting in western Rakhine State. The AA has not joined the NUG, but has used the time since the coup to enhance its political and economic autonomy. For many in the military, this has gone too far and the AA needs to be put in its place.

But over 3,000 members of the army have defected to the NUG, despite the multitude of coercive instruments that it wields to deter them. The number of desertions is unknown. The military is estimated to have taken around 15% casualties, and recruitment is proving to be a challenge. Even the elite Defense Service Academy, once considered the most prestigious school in the country and avenue for upward social mobility, cannot fill their seats. The military has stepped up forced conscription and is using collective punishment to target family members of people who have joined the PDFs.

At the same time, the military‘s budget is severely constrained due to their economic mismanagement. The Myanmar currency, the kyat, has plunged, prompting junta authorities to impose more currency controls. There is a net loss of foreign investment, with little new coming in, except from China. Exports are down dramatically. The banking system is teetering. The World Bank just announced that an estimated 40% of the population is now living under the poverty line.

So what will be the impact of the executions? Since the coup, citizens across the country have protested military rule on a daily basis – resorting to wildcat demonstrations after the bloody crackdown on mass protests that initially greeted the coup. And now, notwithstanding the risk of deadly force, there is another compelling reason to protest the dictatorship.

The problem for them is that for the first time, the population of Myanmar refuses to be intimidated. After a taste of democracy and after enjoying a period of media freedom, diplomatic openness, engagement with the international world, and an open internet, the population refuses to accept the military’s usurpation of power.

In the international realm, the executions may galvanize stronger diplomatic action by foreign governments. It could move the needle and get some European states and Australia to take a tougher stance against the junta. Japan and South Korea, however, are unlikely to change course, though even Tokyo condemned the executions.

Meanwhile the NUG, which is seeking formal diplomatic recognition, is sure to use the executions to further delegitimize the military regime and bolster its own international standing.

So for a military that is losing on the battlefield and that has no legitimacy, and is desperate to prove that it is in charge, the executions were ultimately an act of weakness and desperation. The junta executed four men without knowing what their action may unleash in the coming months.

This matters for one other reason. Since the coup, there’s been little outpouring of support for ousted civilian leader Aung San Suu Kyi who had defended the military against accusations of genocide of the Rohingya minority before the International Criminal Court. And these protracted conflicts really need martyrs. In Ko Jimmy and Phyo Zeya Thaw, the junta has created two tailor-made and beloved martyrs that both the international community and domestic population can rally behind.