25 years of handover and havoc in Hong Kong

The Hong Kong handover or the transfer of sovereignty over Hong Kong, was the formal passing of authority over the territory of the then colony of Hong Kong from the United Kingdom to the People’s Republic of China at midnight on 1 July 1997. This event ended 156 years of British rule in the former colony. Hong Kong was established as a Special administrative region of China (SAR) for 50 years, maintaining its own economic and governing systems from those of mainland China during this time. This report is presented by our East China expert Jenny Kin Jacobs on the occasion of the 25 years of the handover and havoc it has caused in Hong Kong. Starting with the brief timeline of Hong Kong since then.

Deputy Chief Executive Anson Chan, a former deputy to Chris Patten and the main figure in the Hong Kong administration to oppose Chinese interference, resigns under pressure from Beijing and is replaced by Donald Tsang.

Trial of 16 members of the Falun Gong  arrested during a protest outside Beijing's liaison office. Falun Gong remains legal in Hong Kong, despite having been banned in mainland China in 1999, and the trial is seen as a test of the freedoms Beijing guaranteed to respect after the handover. The 16 are found guilty of causing a public obstruction.

Over 500,000 people march against Article 23. Two ministers later resign and the bill is indefinitely shelved.

China rules that its approval must be sought for any changes to Hong Kong's election laws, giving Beijing the right to veto any moves towards more democracy. It was done to deny direct elections for the chief executive in 2007 and the Legislative Council in 2008.

Some 200,000 people mark the seventh anniversary of Hong Kong's handover to Chinese rule by taking part in a demonstration protesting Beijing's ruling against electing the next chief executive by universal suffrage. The headline theme was "Striving For Universal Suffrage in '07 & '08 for the chief executive and Legislature respectively (爭取07, 08普選)."

Pro-Beijing parties retain their majority in LegCo elections widely seen as a referendum on Hong Kong's aspirations for greater democracy. In the run-up to the poll, human rights groups accuse Beijing of creating a "climate of fear" aimed at skewing the result.

Tens of thousands of people commemorate sixteenth anniversary of crackdown on pro-democracy demonstrations in Tiananmen Square.

Following the 2004 protest, the next major event was Tung Chee-hwa's resignation in March 2005. Two protests were held in 2005 including the annual 1 July event and a separate December 2005 protest for democracy. The theme for the march was "Oppose government collusion, striving for universal suffrage (反對官商勾結，爭取全面普選)".

New rules aim to restrict the number of pregnant women from mainland China who come to Hong Kong to give birth. Many had been drawn by the prospect of gaining Hong Kong residency rights for their children and evading China's one-child policy

Beijing says it will allow the people of Hong Kong to directly elect their own leader in 2017 and their legislators by 2020. Mr Tsang hails this as "a timetable for obtaining universal suffrage", but pro-democracy campaigners express disappointment at the protracted timescale.

An estimated 200,000 attend a candlelight vigil on June 4 in memory of students who lost their lives during the Tiananmen Square Massacre. It's the largest turnout in 20 years. Hong Kong remains the only place in China to openly mark Tiananmen's anniversary.

More than 90% of the nearly 800,000 people taking part in an unofficial referendum vote in favour of giving the public a say in short-listing candidates for future elections of the territory's chief executive. Beijing condemns the vote as illegal. 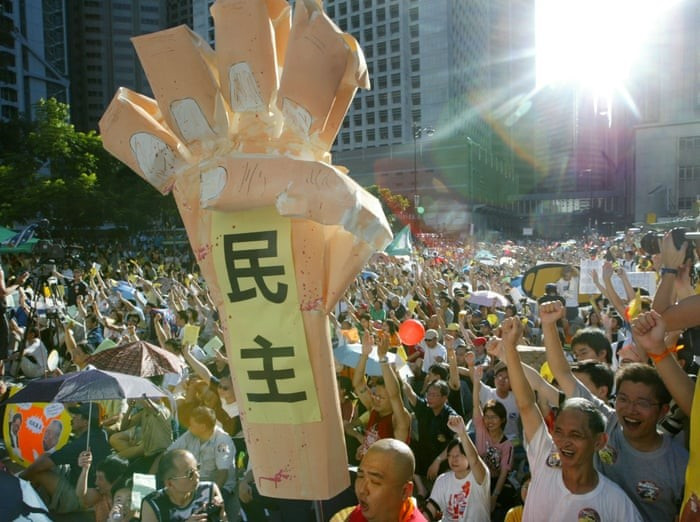 Tens of thousands of protesters take part in what organizers say could be Hong Kong's largest pro-democracy rally in a decade.

Chinese government rules out a fully democratic election for Hong Kong leader in 2017, saying that only candidates approved by Beijing will be allowed to run.

The Umbrella Revolution Its name arose from the use of umbrellas as a tool for passive resistance to the Hong Kong Police's use of pepper spray to disperse the crowd during a 79-day occupation of the city demanding more transparent elections, which was sparked by the decision of the Standing Committee of the National People's Congress of the PRC (NPCSC) of 31 August 2014 that prescribed a selective pre-screening of candidates for the 2017 election of Hong Kong's chief executive.

Pro-democracy demonstrators occupy the city centre for weeks in protest at the Chinese government's decision to limit voters' choices in the 2017 Hong Kong leadership election. More than 100,000 people took to the streets at the height of the Occupy Central protests.

Thousands of people gather in central Hong Kong to show their support for China's intervention in the territory's political affairs after Beijing moves to have two pro-independence legislators removed from office.

The high court disqualifies pro-independence legislators Sixtus Leung and Yau Wai-Ching from taking their seats in the Legislative Council after they refused to pledge allegiance to China during a swearing in ceremony.

Chinese President Xi Jinping visits Hong Kong to swear in Chief Executive Carrie Lam, and uses his visit to warn against any attempt to undermine China's influence over the special administrative region.

The details of the law’s 66 articles were kept secret until after it was passed. It criminalizes any act of:

Changes in Hong Kong after the National Security Law

Hong Kong changed forever after the forceful imposition of the National Security Law. Significant changes were observed in various domains, restricting people instead of giving them autonomy.

Many honest media persons were arrested, received death threats, and abused. They were forced to leave the profession for their stand against the unjust law. The ruling Chinese Communist Party (CCP) ushered in a crackdown on pro-democracy media organizations, activists and politicians that sparked the forcible closure of Jimmy Lai’s Next Digital media empire, including the pro-democracy Apple Daily newspaper, as well as the closure of Stand News,  FactWire  and Citizen News, and the “rectification” of iCable news and government broadcaster RTHK to bring them closer to Beijing’s official line.

There is still hope as the spirit shown by the Apple Daily employee is indelible. One year after the paper was forced to shut down and several senior editors arrested by national security police, former reporters at Hong Kong’s pro-democracy Apple Daily newspaper are still writing the stories the paper might have run, and posting them to social media.

But CCP is doing what it does the best, censoring the voice of Hong Kong. The Hong Kong Journalists Association (HKJA) announced that the Chinese Communist Party had barred at least ten local and international media organizations — including Reuters, Bloomberg News, AFP, and the South China Morning Post — from covering the 25th anniversary of the United Kingdom handing Hong Kong over to China.

At the same time, the pro-China media in Hong Kong is coming up with praise for Xi. Final para begins: “Every face is full of laughter, every sentence is full of joy: ‘General Secretary Xi Jinping, we Hong Kongers are so happy”.

At the senior high level, the Chinese history subject needs to “build up the experiences of national independence and autonomy and to help students construct a full and comprehensive sense of the nation” though compulsory topics like foreign invasion, the anti-Japanese war, the open-door policy and foreign relations. Moreover, students need to “appreciate the value of traditional culture, comprehend the evolution of different systems, tolerate different religions” so that “the important foundation of maintaining national stability and development and the solidarity of ethnic minorities can be laid down.”

Havoc in the Education Sector

More than 6,400 teachers have left the city’s public schools since 2020, according to the Education Bureau. At the same time, 600 university professors and staff have also exited the workforce. In addition, hundreds of books mentioning the 2019 protests and the 1989 Tiananmen crackdown have been removed from libraries.

An autobiography by Wang Lingyun (mother of 1989 student protest leader Wang Dan) and by late ousted liberal premier Zhao Ziyang, was removed from schools. Wang said the removal of the books showed that freedom of expression was being stifled in the city.

An amusing change in the New Hong Kong school history textbooks says the city ‘never was a British colony’.

Many teachers and media personnel have left Hong Kong and many are planning to leave amid FEAR and INSECURITY.

A visual arts teacher “vawongsir“ who was deregistered last April over posting pro-democracy political cartoons on social media has left Hong Kong. He cited pressure from the city’s Education Bureau and criticism from Beijing-backed media. He made the following post before leaving the city.

People are leaving Hong Kong and going to countries like UK. Can it be called EXODUS?

A film censorship law that passed last year has cemented the CCP’s oversight of any creativity, sparking an exodus of filmmakers, including Ngan Chi-sing (also known as “Twinkle”), director of “Love in the Time of Revolution,” an ode to the 2019 protests. Ngan was forced to relocate to the United Kingdom.