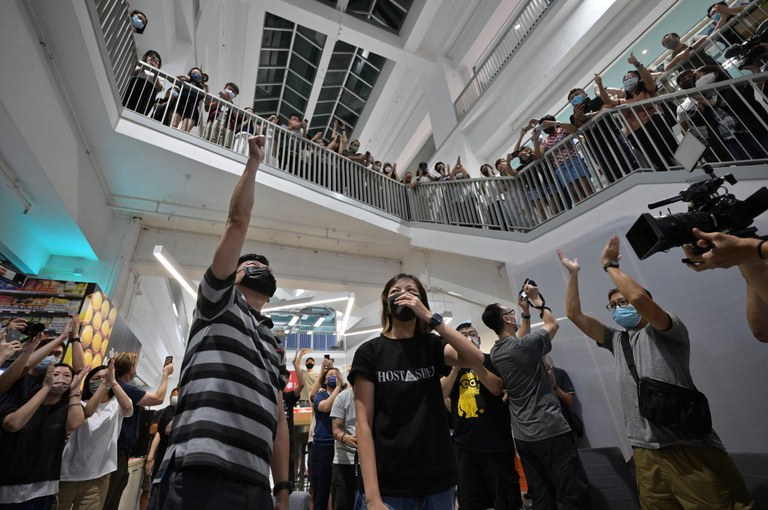 One year after the paper was forced to shut down and several senior editors arrested by national security police, former reporters at Hong Kong’s pro-democracy Apple Daily newspaper are still writing the stories the paper might have run, and posting them to social media.

Journalist Alvin Chan, who uses the hashtags #AppleDaily and #keeponreporting on his Facebook page, posted a report showing a small group of people gathered outside the now-empty headquarters of Jimmy Lai’s Next Digital media empire late on Thursday night.

“A group of former Apple Daily reporters happened to show up at the same time outside the … empty Next Digital building tonight … and took photos,” Chan wrote. “Then, suddenly, several police vehicles arrived at the scene, sirens blaring, so they left, leaving other journalists there still reporting.”

Chan isn’t the only former Apple Daily staffer reporting on news that would be considered in breach of a draconian national security law imposed on the city by the ruling Chinese Communist Party (CCP) from July 1, 2020.

Former colleague Leung Ka Lai has started a Patreon page, and continues to post reports to her Facebook page, including interviews with leaders of the 2019 protest movement that prompted Beijing to tighten its grip on the former British colony.

“I’m not reconciled to this, no,” Leung told RFA. “How can they just use such violent methods to eliminate a media organization?”

“The Apple Daily shouldn’t be allowed to just disappear like this,” she said. “I figured there had to be some work I can keep on doing.”

‘The spirit of those times’

Leung has published around 40 reports on her page since the paper closed, most of them about the aftermath of the 2019 protest movement, many of them based on interviews with arrestees and protest leaders.

“They say the protesters are a forgotten group, but their experiences are actually representative of the spirit of those times,” Leung said. “My specialty is doing in-depth profiles … I think it’s very important to write down what happened to them, and preserve their thoughts and experiences.”

“It feels more like a record, like the role of a storyteller, writing down their stories,” she said.

Leung said she is trying to put into practice the ethos of the protest movement, summarized as a quote from late martial arts legend Bruce Lee, “be water.”

“To be a human being, you need principles, and lines beyond which you won’t go,” Leung said. “If the biggest lesson Hong Kong people took from 2019 was to be water, then this needs to be integrated into everyday life, not just be a slogan.”

Chan has dedicated his page to reporting on the progress of thousands of cases from the 2019 protest movement through the Hong Kong judicial system.

“I like being a reporter, so I think that by reporting on cases from the public gallery, I can offer something like a glimmer of light that lets each other know we exist,” Chan said.

“I don’t know if you can call it a sense of mission; it’s more the method I have chosen to use,” he said.

Chan, who remains in Hong Kong, said he still needs to consider his personal risk under the national security law.

“I need to think about the dangers and risks behind some reports, and won’t touch any of the more controversial or sensitive topics,” he said.

“I hesitate and struggle over whether to report certain Hong Kong-related events in foreign countries,” he said. “It’s a tough, rugged and difficult road to travel, that of an independent journalist.”

“It means more risks at a time when there is little room for 100 flowers to bloom,” Chan said, in a reference to the criminalization of public dissent under the national security law.

“But it makes what we are doing as reporters more meaningful,” he said. “Journalists write the history of a particular time, so I want to preserve the truth for the next generation, including my own.”

According to a June 22 report from the Human Rights Measurement Initiative (HRMI), Hong Kong’s rating under three measures of civil and political rights has plummeted since the survey began in 2019.

The draconian national security law imposed by the ruling Chinese Communist Party (CCP) on Hong Kong from July 1, 2020 has sparked a crackdown on pro-democracy media organizations.

After Lai’s Next Digital media empire was forced to close, the crackdown has also led to the closure of Stand News and Citizen News, as well as the “rectification” of iCable news and government broadcaster RTHK to bring them closer to Beijing’s official line.

Hong Kong recently plummeted from 80th to 148th in the 2022 Reporters Without Border (RSF) press freedom index, with the closures of Apple Daily and Stand News cited as one of the main factors.