The anniversary of the brutal Tiananmen Square Massacre

In the year 1989, around 1.5 million Chinese students, workers and common citizens occupied Beijing’s Tiananmen Square to protest against the ruling regime. This was the largest political protest in communist China’s history. More than 6 weeks of protests ended with the brutal Tiananmen Square Massacre of 3-4 June. Some experts called it a GENOCIDE and others called it ANNIHILATION OF THE MASSES.

This report is presented by our East China expert Jenny Kin Jacobs on the occasion of the anniversary of the brutal massacre.

Newspaper Headlines around the world in June 1989 were flooded with gut wrenching stories of human endeavor and the brutal suppression. Following are some of them:

Hu Yaobang's death Former Communist Party chief Hu Yaobang, dies of a heart attack aged 73. Mourners begin to gather in Beijing's Tiananmen Square.  Hu had been a symbol to them of anti-corruption and political reform. In his name, the students call for press freedom and other reforms.

Demonstrations escalated in Beijing They spread to other cities and universities as well. Students, workers and officials shout slogans calling for greater freedom and democracy and an end to what they called dictatorship - others complain about inflation, salaries and housing. 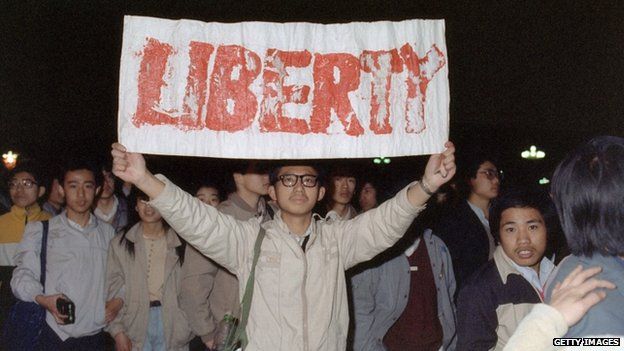 Hu's memorial and formation of Student's union Over 15 thousand students gather outside the Great Hall of the People in Tiananmen Square as Hu's memorial service is held. They deliver a petition of demands and insist on a meeting with Li Peng - China's premier at the time - which is rejected. Over the next days, the students boycott classes and organize into unofficial student unions — an illegal act in China.

Time for Action Deng Xiaoping, the de facto head of state, decides the Party has thus far been “tolerant and restrained,” but the time has come for action.  We’ve got to be explicit and clear in opposing this turmoil.” 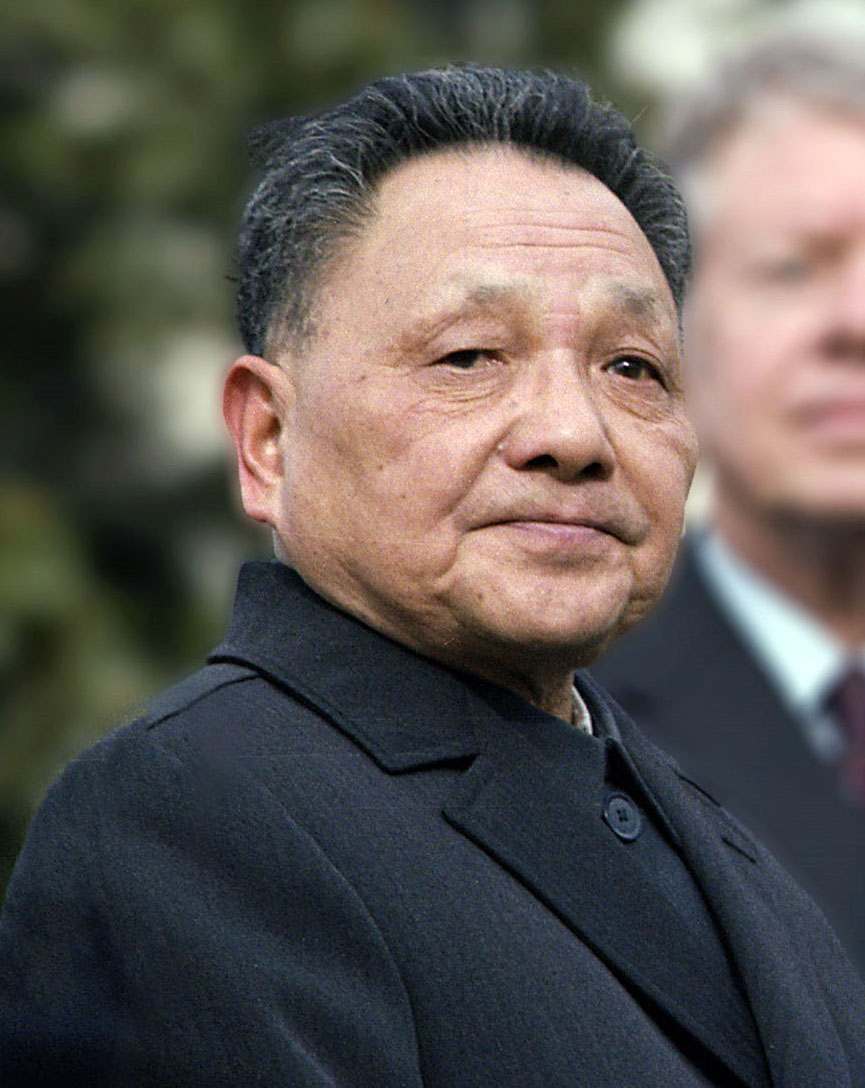 IT IS NECESSARY TO TAKE A CLEAR-CUT STAND AGAINST DISTURBANCES
The state-run newspaper, the People's Daily, published an article accusing people of China for everything. Here is an excerpt "Some abnormal phenomena have also occurred during the mourning activities. Taking advantage of the situation, an extremely small number of people spread rumors, attacked party and state leaders by name, and instigated the masses to break into the Xinhua Gate at Zhongnanhai, where the party Central Committee and the State Council are located. Some people even shouted..., Down with the Communist Party. In Xi'an and Changsha, there have been serious incidents in which some lawbreakers carried out beating, smashing, looting, and burning.

The editorial sets off more demonstrations in other cities...!!

Movement escalating in May and June

Massive number of students marched into Tiananmen Square to commemorate the 70th anniversary of the 1919 “May Fourth Movement,” an intellectual movement that wanted a stronger China. Zhao Ziyang, in a speech to foreign bankers, expresses support for the students’ “patriotism” and essentially contradicts the government’s April 26 editorial. This angers senior Party members.

Ahead of a visit by Soviet leader Mikhail Gorbachev, hundreds of students begin an indefinite hunger strike in Tiananmen Square, pressing for political reforms.

They blame their extreme action on the government's failure to respond to their requests for dialogue. The move draws broad public support.

Their hunger strike draws broad public support; many important intellectuals pledge their help. “There’s such a feeling in China about food because of the thousands of years of famines that they’ve had So when the students went on their hunger strike, it really moved people to tears.” .. explained Jan Wong 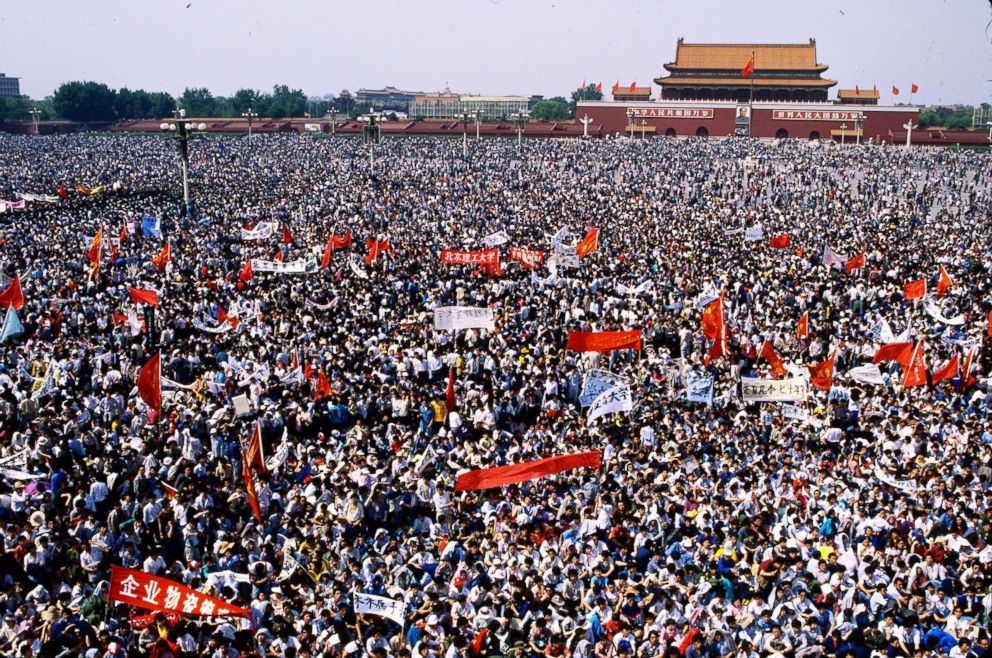 Mikhail Gorbachev arrived in Beijing for the first Sino-Soviet summit since 1959, but the hunger strike forced the government to cancel plans to welcome him in Tiananmen Square. His escort was blocked by protestors on nearly every street in Beijing. It became a cause of embarrassment for the Chinese Regime and they became eager to suppress the movement. 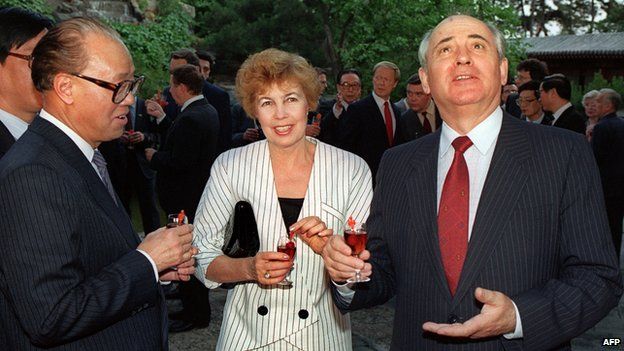 Zhao Ziyang visits students on Tiananmen Square, and makes a final, unsuccessful appeal for a compromise.

Zhao is accompanied by Li Peng, his hard-line rival, and Wen Jiabao, who will eventually become China's premier in the future.

Zhao, who wanted China to introduce far-reaching political reforms, reportedly told the crowd: "We have come too late." It was to be one of his last political acts. 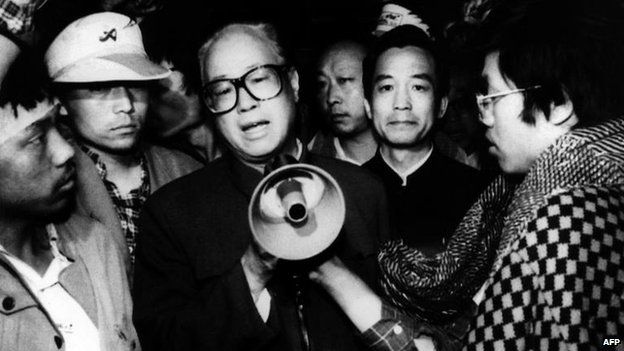 Martial law is declared in several districts in Beijing and troops move towards the city centre.

A huge number of civilians block their convoys, setting up barricades on streets. The soldiers have been ordered not to fire on civilians.

A military helicopter drops leaflets ordering protesters to leave Tiananmen Square immediately. Streets into and out of the city have been turned into obstacle courses

Over the next week, demonstrations continue with almost no visible security presence - there is a jubilant atmosphere in Tiananmen Square.

Students rest in the litter of Tiananmen Square, May 28, 1989, in Beijing, as their strike for government reform enters its third week.

Demonstrators gather around a replica of the Statue of Liberty, defying the declaration of martial law and orders to leave the square.

Communist Party elders approve the decision to put down the "counter-revolutionary riot" by force.

As word spreads that hundreds of thousands of troops are approaching from all four corners of the city, Beijingers flood the streets to block them, as they had done two weeks earlier. People set up barricades at every major interstion. At about 10:30 p.m., near the Muxidi apartment buildings — home to high-level Party officials and their families — the citizens become aggressive as the army tries to break through their barricades. They yell at the soldiers and some throw rocks; someone sets a bus on fire. The soldiers start firing on the unarmed civilians with AK-47s loaded with battlefield ammunition.

“The first rounds of fire catch everybody by surprise,” recalls human rights observer Timothy Brook. “The people in the streets don’t expect this to happen.” The wounded are taken to nearby hospitals on bicycles and pull-carts, but the hospital staff are unequipped to deal with the severe wounds. Muxidi sees the highest casualties of the night; an untold number of people are killed.

A student tells soldiers to leave on June 3, shortly before the crackdown.

On the night of June 3, troops began to move against the protesters with tanks and armored vehicles. Students set an armored personnel carrier on fire.

The soldiers opened fire on us with semi-automatic weapons. They opened fire on people who had no weapons, no rocks, and no bricks. The groups’s anger reached their limit, and everyone in the alley yelled with one voice: “Down with fascists! Down with [Premier] Li Peng!”

“Pop, pop, pop” the bullets flew at us. To avoid getting hurt, we stopped roaring…. I saw injured people being carried to the back of the alley. Some young men found a cart and sent the injured to the closest hospital.

On June 4, 1989, however, Chinese troops and security police stormed through Tiananmen Square, firing indiscriminately into the crowds of protesters. Turmoil ensued, as tens of thousands of the young students tried to escape the rampaging Chinese forces. Other protesters fought back, stoning the attacking troops and overturning and setting fire to military vehicles.

Just past 6 am on 4 June, as a convoy of students who had vacated the Square were walking westward in the bicycle lane along Chang’an Avenue back to campus, three tanks pursued them from the Square, firing tear gas. One tank drove through the crowd, killing more than 11 students and injuring scores of others.

Later in the morning, thousands of civilians tried to re-enter the Square from the northeast on East Chang’an Avenue, which was blocked by infantry ranks. Many in the crowd were parents of the demonstrators who had been in the Square. As the crowd approached the troops, an officer sounded a warning, and the troops opened fire. The crowd scurried back down the avenue, in view of journalists in the Beijing Hotel. Dozens of civilians were shot in the back as they fled. Later, the crowds surged back toward the troops, who opened fire again. The people then fled in panic. An arriving ambulance was also caught in the gunfire. The crowd tried several more times but could not enter the Square, which remained closed to the public for two weeks.

The savagery of the Chinese government’s attack shocked both its allies and Cold War enemies. Soviet leader Mikhail Gorbachev declared that he was saddened by the events in China. He said he hoped that the government would adopt his own domestic reform program and begin to democratize the Chinese political system.

In the United States, editorialists and members of Congress denounced the Tiananmen Square massacre and pressed for President George Bush to punish the Chinese government. A little more than three weeks later, the U.S. Congress voted to impose economic sanctions against the People’s Republic of China in response to the brutal violation of human rights.

Tank man : The symbol of hope and strength

The army on the 5th June had complete control of the Beijing. But the world witnessed a staggering act of defiance – the unarmed man blocking a column of tanks as they moved along Chang’an Avenue towards Tiananmen Square.

Have a look at the video of the Tank Man and his act of Defiance.

To this day, who he was and what happened with him remains a mystery..

On the 9th June 1989, China’s paramount leader Deng Xiaoping appears for the first time since the brutal crackdown. In a speech to military officers he praises their efforts, and blames the turmoil on counter-revolutionaries who wanted nothing less than to overthrow communism.

2 thoughts on “Anniversary of the brutal Tiananmen Square Massacre”