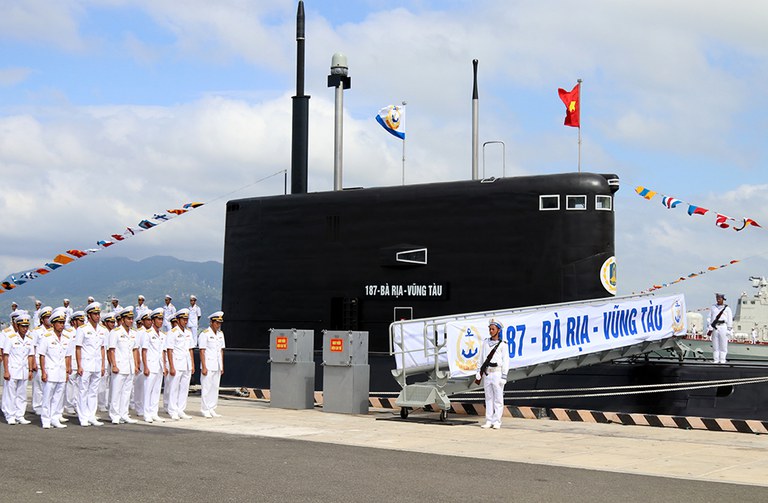 A press release by FET said the Scottish branch of the Texas-based company “successfully completed sea trials” of the SRV “ahead of its deployment for an Asia Pacific-based navy.” Media sources said the client was the Vietnamese Navy which bought six Kilo-class submarines from Russia ten years ago.

Vietnam commissioned a homegrown multi-purpose submarine search and rescue vessel, which it named Yet Kieu after a legendary hero, in July 2021 but this final step “indicates that the vessel should be nearing an operational capability,” said Gordon Arthur, a defense analyst and Asia-Pacific editor of Shephard Media.

“Given that Vietnam has been operating Russian-built Kilo-class submarines since 2014, it is perhaps surprising that it’s taken nearly ten years to get such a rescue capability,” Arthur told RFA.

According to FET’s statement, the sea trials tested the SRV’s capabilities to “perform a variety of demanding operations, including deep dives, navigation, and mating with a target.”

In-country commissioning and testing took two months to complete, it said. The trials were done in close cooperation with the navy and Lloyd’s Register (LR), a maritime classification organization which “offered third party verification and supervised every part of the sea trials.”

The SRV is divided into two sections including a command module for pilots and a rescue chamber for the chamber operator and people being rescued. It is capable of rescuing up to 17 people at a time and operates at depths of up to 600m, FET said.

The vehicle boasts “some of the most advanced sensors and sonars” including a doppler velocity log, fibre optic gyroscope, sonar, and depth sensing to quickly locate a distressed submarine.

FET will also be providing training for navy pilots as part of the contract, which includes theoretical training, maintenance, diving and recovery.

The mother ship ‘927-Yet Kieu’ meanwhile is nearly 100m-long, 16m-wide and 7.2m-high, with a displacement of up to 3,950 tons, according to Vietnamese defense sources.

The multi-purpose vessel can operate continuously at sea 30 days and nights and it is capable of withstanding high wind and waves. Vietnamese army company Z189 began building the ship in mid-2018 after the commissioning of the last of six Russian-made submarines in 2017.

Vietnam has the largest submarine fleet in Southeast Asia with six Kilo-class diesel-electric submarines, dubbed “black holes” for their stealthiness. With the new SRV, the Vietnamese navy has now joined the club of countries with submarine rescue capability in the Asia-Pacific including Australia, China, India, Japan, Malaysia and South Korea.

“There has been a growth in the number of submarines in the region,” noted Gordon Arthur, adding that as submarine incidents have the potential to quickly become catastrophic, “it is vital that navies operating submarines have their own rescue capability, so that they can quickly swing into action.”

“A submarine rescue capability is like a tuxedo. They are expensive and are rarely used – but when you do need it, absolutely nothing else can replace it,” he said.

In April 2021 an Indonesian navy submarine, the KRI Nanggala, sank off the coast of Bali killing all 53 crew on board.

Yet Jakarta is seeking to expand its submarine fleet from four at present to at least ten by 2029.

“Some nations think that owning submarines will bring prestige and respect but submarines are not shiny toys. They are very expensive and underwater operations are inherently dangerous,” said Arthur.

“Navies need to ensure they have the skills, money and rescue capability to keep their submarines in top condition.”

Vietnam, China and some other countries are entangled in territorial disputes in the South China Sea and the new submarine force would enable Hanoi to defend its interests, the Vietnamese military leadership said.

But compared to its neighbor, Beijing has a much larger fleet of nearly 60 submarines, a third of which are nuclear-powered.

Analysts have questioned if Vietnam’s new SRV could be used for reconnaissance purposes besides submarine rescue missions. But some experts such as Collin Koh, Research Fellow at the S. Rajaratnam School of International Studies, point out that such submersibles are handicapped by range and endurance, “so they may have limited standoff reconnaissance capabilities.”

“But such submersibles with suitable modifications can potentially do seabed espionage-related work, such as tapping undersea cables,” Koh said.