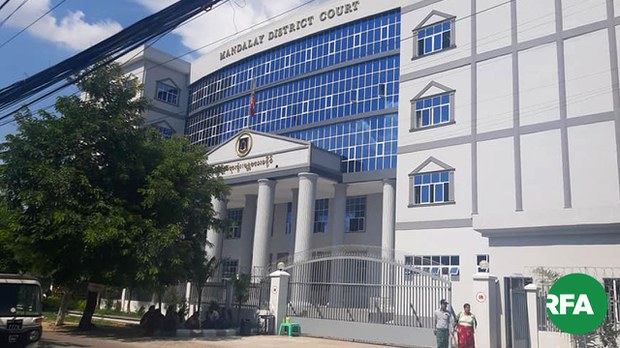 Three lawyers who were representing clients in anti-regime political cases have been arrested in Mandalay, sources close to the legal community told RFA on Friday.

A source close to the court told RFA Tin Win Aung, U Thuta and an unnamed lawyer were picked up on their return from working at Obo Prison’s court in Mandalay on Wednesday evening.

“Three people have been arrested, the third name is still unknown,” he said.

No contact had been made with the detainees and it is still not known where they were taken, the source told RFA, adding that six Mandalay lawyers, including Ywat Nu Aung, are now in custody.

Aung was arrested on April 27 and charged under Section 50 (j) of the Anti-Terrorism Law.

In the third week of June, Khin Than Htay, another Mandalay lawyer who was assisting with political cases, was arrested by the military council and taken to Obo prison’s court. Sources said the legal transcript of her case was written at the court.

Arrests of lawyers have not been confined to Mandalay. In Sagaing region’s Monywa, three lawyers appear to have been arrested in the past few weeks. One was Moe Zaw Htun, who was representing Myint Naing, the NLD government’s Chief Minister in the region. The other two lawyers are missing and it is not clear whether they have been arrested, Monywa residents told RFA.

According to data compiled by RFA, 27 lawyers have been arrested since the February 2021 military coup, including several representing people arrested on political charges.