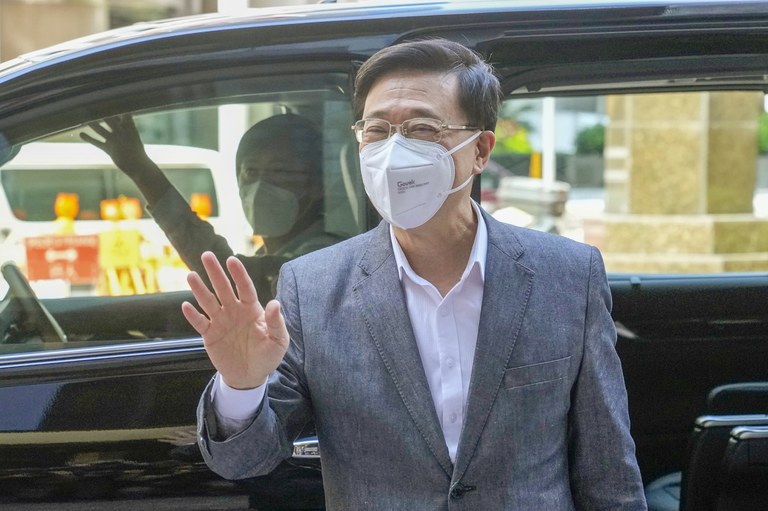 Former TVB News producer and former RTHK radio show host Allan Au, who has also had columns in Stand News and in the Ming Pao newspaper, was taken away from his home in Kwai Chung at around 6 a.m. local time on suspicion of “sedition” under colonial-era laws.

Au’s arrest for “conspiring to publish seditious material” came after his sacking from RTHK in June 2021 as the government moved to exert editorial control over the broadcaster, amid an ongoing crackdown on public dissent and political opposition that began with the July 1, 2020 imposition of the national security law on Hong Kong by the ruling Chinese Communist Party (CCP).

“The arrest of veteran journalist Allan Au is a further blow to press freedom in Hong Kong,” the U.K.-based rights group Hong Kong Watch said in a statement on its website, adding that his arrest appeared to be part of an ongoing national security case involving former senior editors at Stand News, Chung Pui Kuen and Patrick Lam.

“The international community must condemn this latest attack on the free press in Hong Kong, and work to pressure China and the Hong Kong Government to stop targeting journalists and to release political prisoners in Hong Kong,” Hong Kong Watch CEO Benedict Rogers said.

“We worked together and used to hike together,” Chan said. “Everyone grew up reading Au’s [columns]. His name represented the [best of the] Hong Kong press … He explained the news in a calm and rational way.”

The HKJA said in a statement on its website: “The HKJA is deeply concerned about the arrest, and that it will further damage freedom of the press in Hong Kong.”

It said Au had also worked as a lecturer at the Chinese University of Hong Kong (CUHK)’s journalism department, and “often shared his experience with the younger generation.”

“We call on the government to protect the freedom of the press and speech enjoyed by Hong Kong citizens in accordance with the [law],” it said.

Lee is widely regarded as Beijing’s intended winner of a closed-circle “election” slated for May 8.

The Global Times said Lee was committed to ensuring that nobody will be allowed to stand in elections in Hong Kong unless they are truly loyal to Beijing.

“Coming in the same week that the former police officer and security minister, John Lee, was anointed as Carrie Lam’s successor, the arrest of Allan Au confirms what many of us feared, that Beijing will continue its crackdown on human rights and press freedom in the city,” Rogers said in a statement on Au’s arrest.

Meanwhile, former pro-democracy lawmaker Ted Hui, currently in exile in the U.K., has had his family’s assets frozen by national security police, he said in an April 9 Facebook post.

Hui’s family is now subject to a restraining order under the national security law that prevents him or his family members from disposing of any assets in Hong Kong, according to a copy of the official document posted to Facebook.

Hui said the move was a form of political persecution “using judicial means.”

“This is the second time I have been robbed by the Hong Kong government … using shameful methods,” he wrote, calling on the international community to impose further sanctions on Hong Kong officials responsible for the move.