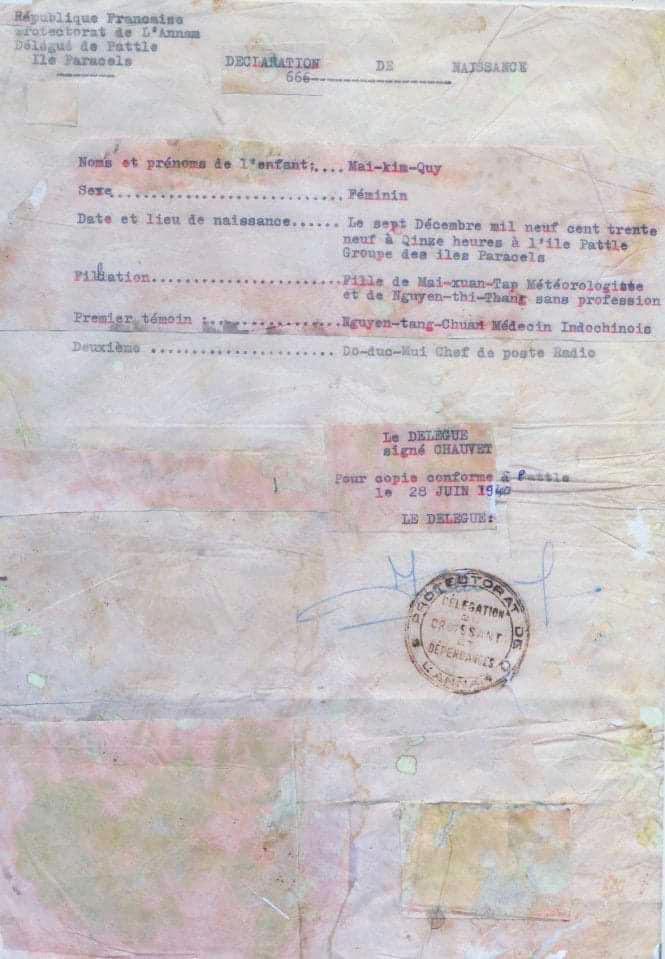 New evidence has emerged that may help support Vietnam’s claims over the Paracel islands in the South China Sea, currently occupied by China.

A copy of a birth certificate issued in June 1940 claims that Mai Xuan Quy, a girl, was born at 3 p.m. on Dec. 9, 1939, on Pattle Island to Mai Xuan Tap, a Vietnamese meteorologist and his wife, Nguyen Thi Thang.

The paper was witnessed by Nguyen Tang Chuan, a medical doctor, and Do Duc Mui, head of the local radio communication station.

As such, it indicates that French Indochina, of which Vietnam was part, had administration of the island and Vietnamese people worked there. That could be significant evidence as claimants to disputed features in the South China Sea may seek to show they were the first to have an official presence there.

Pattle is a coral island, part of the Crescent Island group of the Paracel Islands in the South China Sea. It served as the main base for the colonial-era French Indochinese and later, South Vietnamese occupation of the Paracels.

Vietnam, Taiwan and China all claim sovereignty over the entire Paracel archipelago but China has occupied it since 1974.

During the 1930s, the French colonial government built some infrastructure including a weather station, a medical facility and a post office on Pattle Island.

Mai Xuan Tap, father of Mai Kim Quy, was among the civilians sent there to man the weather station when it was first set up in 1938. He brought with him his wife and two daughters, Mai Thi Phi, then two years old, and a newly born baby, Mai Thi Phuong.

“Unfortunately Quy died in 1942 after we returned to the mainland.”

“Our life on Pattle Island was quiet and peaceful. The Vietnamese living there were mainly civil servants working at the weather station, the post office and the hospital,” Phi recalled.

“We had never seen any Chinese person on the island during the whole time we were there,” she said.

Mai Xuan Tap died in 1983, his wife died much earlier in 1954. After returning to Saigon, the couple had seven more children including three sons and four daughters.

The birth certificate of Mai Kim Quy was passed to the eldest son, Mai Xuan Phu, for safekeeping.

“My family has donated the birth certificate to the Vietnamese foreign ministry,” said Mai Thi Phi.

“The ministry said this is a valuable document that can play an important role in defending the country’s territorial claims in the South China Sea,” she added.

The Paracel archipelago is now occupied and fully controlled by China, with the biggest feature – Woody Island – being extensively developed. China has also carried out land reclamations and substantial upgrades of its military infrastructure there, according to the Asia Maritime Transparency Initiative at the Washington-based Center for Strategic and International Studies.

Yet disputes remain over the islands’ ownership.

Contested territorial claims are hard to verify, especially because until the 20th century, there was no permanent military nor civilian presence of any country there.

China, Vietnam and Taiwan all have ample historical documents to back up their claims, including maps, declarations and different materials.

Vietnam, which was part of French Indochina, said the troops of Annam (the then-name of colonial Vietnam), and after that, civilian administrators, set up base on the Paracels before anybody else.

“My argument would be that this [the birth certificate] doesn’t swing the argument decisively but it is very useful evidence that Annam was in effective occupation of some of the Paracels at that time,” Hayton said.

“If the case ever went to a tribunal of some kind, the Chinese would put forward their own evidence and the judges would decide which case was stronger.”

“Such cases aren’t decided by vague claims or printing names on maps but on proving that a state had administrative control over a feature – and registering a birth on the island to a civil servant is quite strong evidence of that,” the British analyst said.

His argument, however, is being rejected by some historians who point out that China’s stance would be to stick to historical claims.

“The French Government stated at the time that they only occupied the Paracels ‘before any other Power did so’, meaning Japan. This was widely reported in the press,” said Mark Hoskin, an independent researcher and lecturer on China’s maritime history and law.

This action was taken because the Japanese had occupied Hainan and implemented a blockade of the Southern Chinese coastline. Japan was threatening France due to the transport of arms via Indochina to China.

“So the French occupation of the Paracel islands had strategic and military reasoning, but was not sovereignty related. The French statements themselves negate any potential for a sovereignty claim,” Hoskin added.