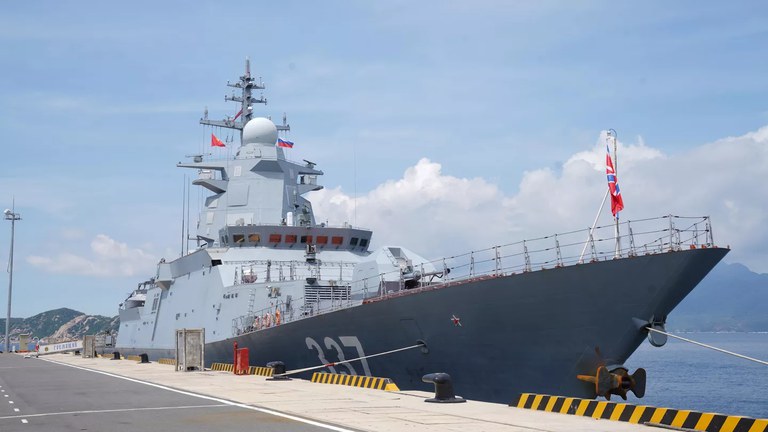 The Vietnamese government has launched a national campaign to promote its maritime policies as the ruling party pledges to explore “all available legal tools” to defend its interests amid China’s growing assertiveness in the South China Sea.

A government order stipulates that by 2025, all domestic media outlets are required to have a dedicated section on Vietnam’s sea and ocean strategy, and their entire editorial staff must have the necessary  knowledge and understanding of both the international and domestic laws on the sea.

Meanwhile, the Vietnamese authorities have banned all tourist activities on two islets adjacent to the strategic Cam Ranh Bay that is undergoing intensive development into an advanced naval base, home to its submarines.

Vietnam has the largest submersible fleet in Southeast Asia with six Kilo-class subs, bought from Russia at a cost of U.S.$1.8 billion.

Tour guides and witnesses told RFA that since April, the two islands of Binh Ba and Binh Hung in Cam Ranh Bay, Khanh Hoa province, have become off-limits to foreign visitors. Vietnamese nationals still have limited access to the scenic islets, just a stone’s throw from the docked frigates.

“Eventually, even Vietnamese tourists will not be allowed on Ba Binh,” said Binh, a tour operator who wanted to be known only by his first name.

“So, my advice is to visit it while you can,” he said.

Cam Ranh Bay is a well known deep-water port in central Vietnam, only 300 kilometers from Ho Chi Minh City. It was used by the French, and subsequently, the U.S. Navy until the end of the Vietnam war.

In 1979 the Soviet Union signed a 25-year lease of Cam Ranh with the Vietnamese and spent a large sum of money to develop it into a major base for the Soviet Pacific Fleet. But Russia withdrew from the base in 2002, citing increased rent and changing priorities.

Hanoi has since announced a so-called “three nos” policy – no alliances, no foreign bases on its territory and no alignment with a second country against a third – that means foreign navies will not be allowed to set up bases in Cam Ranh.

However, a logistics faciliy has been established to offer repair and maintenance services to foreign vessels, including Russian and U.S. warships. Moscow is still maintaining a listening station in Cam Ranh Bay and has also indicated that it is considering a comeback, according to Russian media.

With 50 ships and 23 submarines, the Pacific Fleet is Russia’s second largest naval fleet after the Black Sea Fleet which is currently involved in the war in Ukraine.

U.N. Convention on the Law of the Sea

A Russian presence may be seen as a counterweight for competing China-U.S. rivalry in the South China Sea, where Beijing claims “historical rights” over almost 80 per cent, analysts said.

With China apparently gaining a foothold in the region, at the Ream naval base in Cambodia, Cam Ranh may become even more important strategically to other regional players.

On June 19 Vietnam protested against China’s drills near the Paracel islands, claimed by both countries but occupied entirely by China.

Hanoi and five other claimants in the South China Sea are still struggling to agree on a Code of Conduct in the contested sea, where the U.S. and allies have been challenging China’s excessive territorial claims with their freedom of navigation operations (FONOPs).

Tran Cong Truc, former head of Vietnam’s Border Committee, said that UNCLOS “paved a clear legal corridor for countries to defend their lawful rights,” and needed to be “properly utilized.”

A series of special events are being held to commemorate the anniversaries, as well as to highlight the importance of this “legal corridor.”

“UNCLOS and Vietnam’s Law of the Sea are the two main legal tools for the fight for our rights,” Sr. Lt. Gen. Nguyen Chi Vinh, former vice minister of defense, was quoted by the People’s Army newspaper as saying.

“Vietnam should only consider military actions as the last resort after exhausting all other options,” he said.