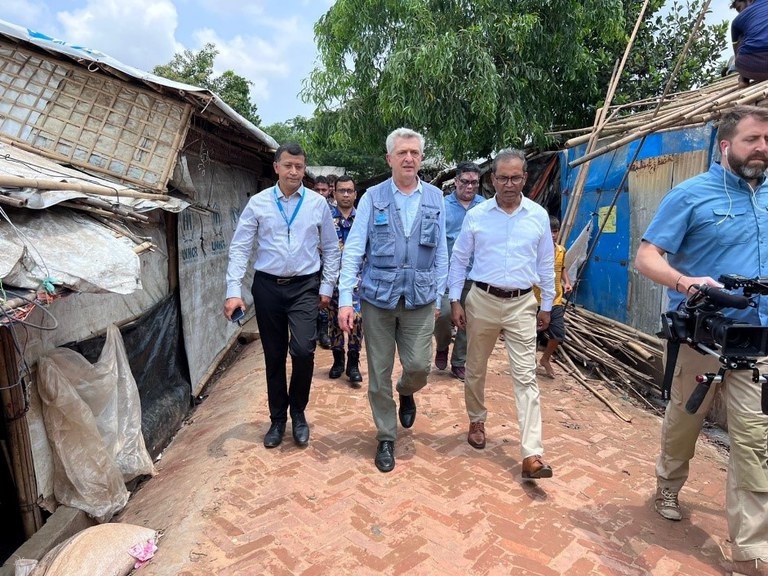 Despite the Ukraine war, the world mustn’t forget about the plight of Rohingya and other refugees as well as the burden of their host countries, the head of the U.N.’s refugee agency pleaded Wednesday as he ended a five-day trip to Bangladesh.

The conflict stemming from the Russian invasion of Ukraine and its humanitarian fallout is straining resources everywhere, including in supporting the sprawling refugee camps in southeastern Bangladesh along the frontier with Myanmar, said Filippo Grandi, the United Nations High Commissioner for Refugees.

“I am here to remind the international community that there is not just Ukraine. Bangladesh has been bearing the responsibilities for five years and this support cannot decline,” he told a press conference in Dhaka.

“I will not accept it. I will put maximum pressure on all donor partners.”

“It is very important that the world knows this should not be forgotten …. The risk is there of marginalization of some of the crises because so many resources are absorbed, especially by the Ukraine emergency,” he added.

The camps in Bangladesh’s Cox’s Bazar district house about 1 million Rohingya refugees, including 740,000 who fled atrocities during a military offensive in Myanmar’s Rakhine state in 2017.

But only 13 percent of the U.S. $881 million needed by humanitarian agencies this year to support the Rohingya refugees in the South Asian nation has been funded as of May.

“I am a bit worried… first of all, there are a bit more needs because there is also Bhashan Char, and now in Ukraine, in Afghanistan and a lot of other competing crises, we struggle a bit, but I am here also for that reason,” Grandi said.

Bhashan Char is a remote island in the Bay of Bengal where the Bangladesh government has relocated some 26,000 Rohingya refugees since December 2020, ostensibly to ease the burden on the crowded mainland camps in Cox’s Bazar.

During his stay in Bangladesh, Grandi visited refugee camps in both Cox’s Bazar and on Bhashan Char.

Grandi said the war in Ukraine had added an additional financial burden on the United Nations, which was affecting the Rohingya camps as well.

“The Ukraine emergency is posing a problem here as well. We buy liquid gas for … [these] camps. That price has gone up a lot and this is a direct impact of the crisis,” he said.

When asked, Grandi acknowledged that funding for the Rohingya refugees would be more difficult than before.

“I think the government knows that, we know that, and the donors know that.”

The solution to the Rohingya crisis lies in Myanmar, the UNHCR chief said.

“The Rohingya refugees I met reiterated their desire to return home when conditions allow. The world must work to address the root causes of their flight and to translate those dreams into reality,” Grandi said.

Grandi talked with Rohingya about their situation during his visit to refugee camps earlier this week, said Kin Maung, the founder of the Rohingya Youth Association in Cox’s Bazar.

“We hope, following the visit of UNHCR boss, the process of repatriation will get more focus,” he told BenarNews.

“We want to return to our homeland with dignity.”