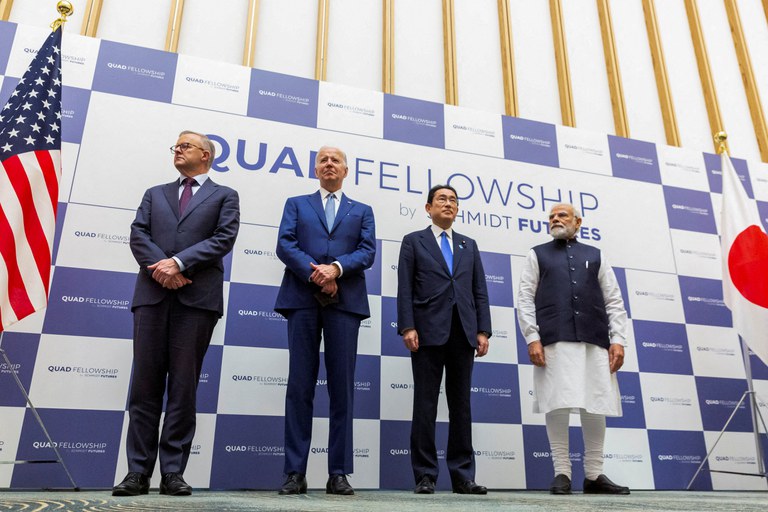 Japan has described as “provocative” a joint patrol by Chinese and Russian air forces over the Sea of Japan and the East China Sea, conducted when Quad leaders met in Tokyo to discuss regional security.

At Tuesday’s meeting, the leaders of Australia, India, Japan and the United States declared a “steadfast commitment to a free and open Indo-Pacific.”

Japanese Minister of Defense Nobuo Kishi said after the summit that Japan had “communicated through our diplomatic routes our grave concerns” over the China-Russia joint patrol.

“We believe the fact that this action was taken during the Quad summit makes it more provocative than in the past,” Kishi told reporters in Tokyo, adding that it was the fourth such incident since November.

The Chinese Ministry of National Defense said in a brief statement that a joint aerial strategic patrol was carried out “in the airspace over the waters of the Sea of Japan, the East China Sea and the western Pacific Ocean.”

The two militaries staged the patrol “in accordance with their annual military cooperation plan,” the statement said.

The Russian Defense Ministry denied that the joint patrol was aimed against third countries.

It said that during the 13-hour mission Russian and Chinese bombers did not intrude into Japanese and South Korean airspace.

The Russian ministry maintained that the Russian and Chinese aircraft “ operated strictly in compliance with the provisions of international law.”

A number of Russian Su-30SM jets provided fighter support for this air task force and at some sections of the route, the bombers were “escorted” by F-2 aircraft of the South Korean Air Force and F-15 jets of the Japanese Air Force, according to the Russian Defense Ministry.

Japan’s Ministry of Defense Joint Staff confirmed that Japanese fighters “scrambled to cope with a suspected intrusion into Japan’s airspace over the Sea of Japan, the East China Sea and the Pacific Ocean.”

This is the fourth consecutive year that Chinese and Russian air forces have conducted such joint strategic air patrol. The two militaries have also carried out numerous joint exercises on land and at sea.

At a briefing on Tuesday, U.S. State Department spokesperson Ned Price said the latest event demonstrated that the Sino-Russian partnership is “quite alive and well.”

Russia’s President Vladimir Putin and Chinese leader Xi Jinping held a summit in February, in which they praised the bilateral partnership as having “no limits” and “no forbidden areas of cooperation.”

“China-Russia cooperation is driven by strong internal dynamics and valued for its independence. It is not targeted at any third party and will not be affected by others,” said Chinese Foreign Ministry spokesman Wang Wenbin on Tuesday.

The Russia-initiated war in Ukraine has pushed the two countries even closer and Beijing has so far refused to condemn the Russian invasion.

“As the international community responds to Russia’s aggression against Ukraine, the fact that China took such action in collaboration with Russia, which is the aggressor, is cause for concern. It cannot be overlooked,” Japanese Defense Minister Kishi said, referring to Tuesday’s joint patrol.

The Quad summit on Tuesday, though not mentioning China, did reaffirm the grouping’s “resolve to uphold the international rules-based order where countries are free from all forms of military, economic and political coercion.”

Beijing has been responding to international criticism by holding military drills and deployments.

On Monday, U.S. President Joe Biden said his country is “committed” to defending Taiwan in the event of a Chinese invasion.

On the same day, China announced increased naval activities in the two strategically important straits northwest and southwest of Japan.

Japan’s Ministry of Defense Joint Staff said two Type 054A frigates of the PLA Navy – the Xuzhou and the Handan – transited the Tsushima Strait towards the Sea of Japan while the Sovremenny-class destroyer Hangzhou entered the Pacific Ocean after crossing the Miyako Strait from the East China Sea.

Meanwhile on Wednesday, the PLA Eastern Theater Command said it has “recently organized joint combat-readiness patrol and real-combat training exercises involving multiple services and arms in the waters and airspace around the Taiwan Island.”

“These actions are stern warning against the recent collusion activities between the US and the ‘Taiwan independence’ separatist forces,” said command spokesperson, Senior Col. Shi Yi. He did not specify the dates when the exercises took place.

China considers Taiwan a breakaway province that should be unified with the mainland, by force if necessary.

The Eastern Theater Command of the PLA is responsible for Taiwan, Japan and the East China Sea.