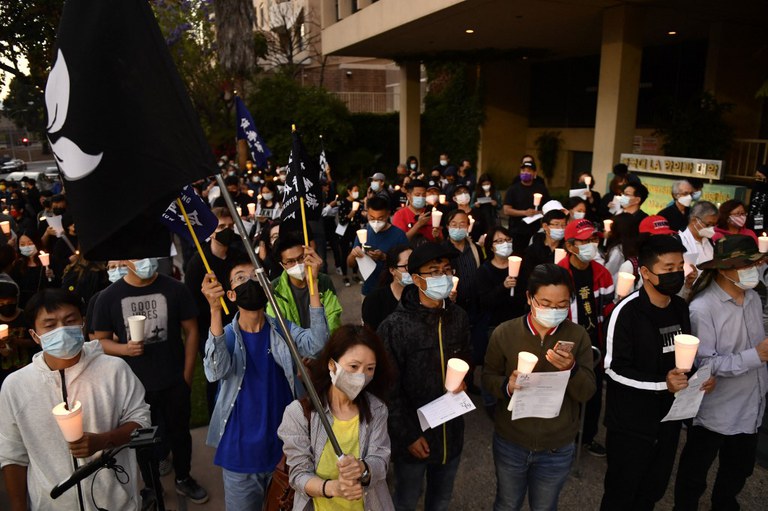 Hong Kong’s once-annual candlelight vigil for Tiananmen massacre victims is likely to be suppressed for a third year running, amid ongoing political crackdown under the ruling Chinese Communist Party (CCP), and plans are afoot to move the event to democratic Taiwan.

The vigil has been banned — ostensibly for public health reasons — for the past two years and the leaders of its organizing group, the Hong Kong Alliance in Support of Patriotic Democratic Movements of China, arrested for colluding with foreign powers under a national security law imposed by Beijing from July 1, 2020.

The Ming Pao newspaper reported that the Leisure and Cultural Service Department (LCSD), which administers the Victoria Park soccer pitches where the rally used to take place, has suspended any bookings on June 4, the 33rd anniversary of the Tiananmen massacre, although bookings are available on other days in the same month.

An LDSD official who answered the phone on Tuesday said that “non-designated bookings” had been suspended at its sports facilities, and that nobody had tried to hire the soccer pitches between June 1 and 5 this year.

However, the department’s official website carried a notice dated May 12, announcing that two of the park’s six soccer pitches will be “closed for maintenance” throughout May and early June.

The Hong Kong Police said on Monday that they hadn’t received any application to hold a large gathering on Hong Kong Island on June 4.

League of Social Democrats spokeswoman Chan Po-ying said the group hasn’t yet decided what, if anything, it will do to mark this year’s anniversary. Former chairman Avery Ng said there are currently no plans for such an event.

“The government has used a number of excuses in the past few years to refuse to allow citizens to hold large-scale gatherings,” Ng told RFA. “So I wouldn’t be surprised if any application by other people to hold a June 4 event was turned down this year too.”

“Of course, the government keeps hoping that people will forget about June 4, but I don’t think they will,” he said.

You Weijie, spokeswoman for the Tiananmen Mothers victims’ group said it was a shame that the event couldn’t go ahead in Hong Kong, but said people wouldn’t forget the date, nor the three decades of vigils that had already happened.

“The candlelight vigil in Victoria Park went on for more than 30 years, and is deeply rooted in the memories of everyone with a conscience,” You told RFA. “It’s part of the desire to live a free life.”

“The candlelight won’t be extinguished; it will just be lit by people of conscience all over the world,” she said.

Many of those commemorating those who died when the People’s Liberation Army (PLA) rolled into Tiananmen Square, putting a bloody end to weeks of student-led protests in the spring and early summer of 1989 will likely be on the democratic island of Taiwan.

Taiwan’s New School for Democracy has said it will keep up the vigil tradition in support of Hong Kong, which now has around 1,000 political prisoners amid a citywide crackdown on dissent instigated by the ruling Chinese Communist Party (CCP) in the wake of the 2019 protest movement.

Chairman Tzeng Chien-yuan said the group will co-host the vigil in Taiwan on the night of June 3-4, now that Victoria Park is no longer an option.

“Back when I was growing up, I actually used to envy Hong Kong’s freedoms and rule of law,” Tseng said, in a reference to Taiwan’s peaceful transition from single-party state under authoritarian rule by the Kuomintang (KMT) to a pluralistic democracy with a strong human rights record.

“Taiwan’s path to democracy was nourished and supported by Hong Kong, and I think we Taiwanese are duty bound to speak up for Hongkongers and for all Chinese people now that the June 4 event can’t be held there any more,” Tseng said.

The centerpiece of this year’s ceremony will be a smaller replica of the Pillar of Shame sculpture, which was dismantled and removed from public view among other commemorative artworks on Hong Kong university campuses, amid a crackdown on public criticism of the government under a draconian national security law imposed on the city by Beijing.

“The rule of law has fallen in Hong Kong, which is so close to Taiwan,” Tseng said. “It means Taiwan is also under great threat from the expansionism, infiltration and encirclement [practiced] by the CCP.”

“We have also been through a struggle on the way to democracy … so the Taiwanese people are on a historic mission … to use our democracy as a model,” he said.

The Taiwan branch of Amnesty International also plans to premiere “May 35th”, a Hong Kong stage play linked to June 4, in Tainan and Taipei on June 1 and 3 respectively, its secretary general Eeling Chiu told RFA.

“The June 4 commemoration has been banned and suppressed in Hong Kong for the past two years,” Chiu said. “We want to bring May 35th to Taiwan … so that more Taiwanese know about June 4.”

“They bring a lot of change … so we are looking forward to reaching more young people.”

As the anniversary approached, a U.S.-based rights group said there are now more than 1,000 political prisoners in Hong Kong, compared with a handful at the start of the 2019 protest movement.

“The large number of political prisoners is a key indicator of the deterioration of the rule of law, judicial independence, and protections of civil and political liberties, marking Hong Kong’s rapid descent into authoritarianism,” the Hong Kong Democracy Council (HKDC) said in a recent report.

“In few places in the world has the state of human rights deteriorated so rapidly as in Hong Kong over the past three years, with the rights to freedom of assembly, freedom of association, freedom of expression, and political participation all indefinitely suspended, unreasonably restricted or abolished,” the group said.

More than three quarters are under 30, more than half under 25, and more than 15 percent are minors, it said.

It identified a growing tendency to keep political opponents behind bars on remand, amounting to long-term pretrial detention, with 69 prisoners on remand for more than a year.

It said the authorities have made at least 10,501 political arrests and prosecuted 2,974 political defendants, with a conviction rate of 67 percent across 1,815 trials to date, the majority for offenses relating to “unlawful assembly.”

Of those, 110 minors have been sentenced to an average of 26.9 months in prison, while hundreds have waited for nearly three years for cases involving “rioting” charges to progress.

“The situation in Hong Kong constitutes a grave human rights crisis to which the rest of the world must respond more actively than it has up to now,” the HKDC said, calling for international sanctions on national security judges and clearer immigration pathways for politically persecuted Hongkongers to seek new lives in the United States.

HKDC director Brian Leung said some of the charges brought against young protesters were excessive.

“Most of the people were prosecuted for illegal assembly, or ridiculous things like being in possession of a laser pointer [which were regarded as] offensive weapons,” Leung told RFA.

“This political suppression hasn’t just been aimed at well-known politicians, but at the whole of civil society,” he said. “People who just went out on the streets during the 2019 protest movement.”

“In just three years, the whole of civil society has been suppressed, and the numbers are on par with countries such as Belarus, Cuba, and Myanmar,” Leung added.