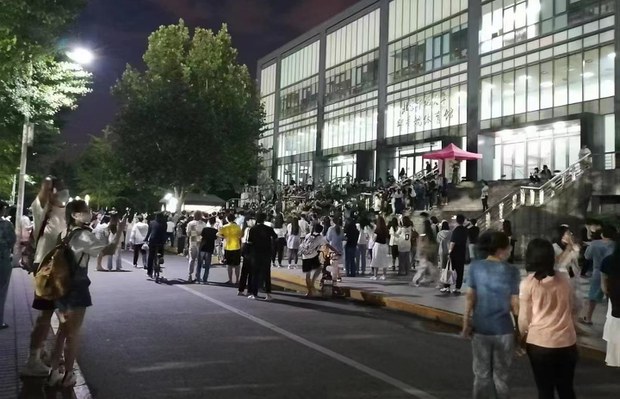 Hundreds of students gather have been gathering this week at two Beijing universities to protest over COVID-19 restrictions, according to video footage uploaded to social media.

Hundreds of students at the China University of Political Science and Law (CUPL), and at Beijing Normal University (Beishida), gathered to show their displeasure with current restrictions on t heir movements, as the ruling Chinese Communist Party (CCP) continues to roll out its zero-COVID policy across the country following a grueling weeks-long lockdown in Shanghai.

The protests came as district officials in Beijing’s Haidian district announced a local lockdown, with classes at the two universities suspended from Monday.

Students at CUPL gathered in their hundreds outside the main block, lighting up their phone flashlights, and demanding the option to go back home, as well as clear information about the timing of final exams and greater transparency from the school administration.

The rally was followed by a similar gathering at Beishida on Tuesday, during which some protesters shouted historic slogans linked to China’s first peasant uprising in 209 BC.

Footage of the protest posted to social media showed a crowd of people waving their lit-up mobile phones.

“Everyone is concerned right now about the policies the university is announcing,” a student says in one of the clips. “[We] demand clarification of the timing and methods used for the final exams, and that they respond positively to student demands, with no backlash or interviews.”

A poster at Beishida said the administration had given them a verbal promise that they would be able to at least apply to go back home for the duration of the COVID-19 measures, and promised not to retaliate against students who took part in the protest.

‘They want their freedom back’

A Weibo post said some 300 people turned out on Tuesday evening, although around 500 were expected to take part.

Another source said most of the students were angry over the decision to stop face-to-face classes, while still requiring students’ presence on campus to take part in online classes, citing other students at different universities in the same district who were being allowed home.

A resident of Haidian who gave only the surname Zhang said the students want some measure of freedom back.

“Students feel that being stuck indoors all day isn’t what they signed up for, and they want their freedom back,” Zhang said. “Similar incidents took place at the Beijing International Studies University (BISU).”

“I don’t know when Beijing will get back to normal; they are estimating not until June,” Zhang said.

Beishida announced on Tuesday that many students are currently on their way back home to study from their hometowns, and will complete their studies and exams online.

People’s University alumnus Guo Baosheng, who now lives in the U.S., said students have shown that there is still a spirit of resistance, and that the university’s diplomatic approach — at least promising to meet some of their demands — was likely due to the fast-approaching 33rd anniversary of the student-led protests of 1989 and their bloody conclusion in the Tiananmen massacre.

“One of the reasons for the compromise is that zero-COVID is causing very real public resentment,” Guo told RFA. “The lower-ranking cadres, including school leaders, are actually very unhappy about the zero-COVID approach, and should be somewhat flexible.”

“Another reason is that we are entering the most sensitive period for Beijing colleges and universities, namely, the anniversary of June 4, 1989,” he said.

Guo said the authorities typically step up surveillance and monitoring of students’ activities in the run-up to the anniversary.

“I was a key target in my school around the June 4 anniversary in 1993,” he said. “The school leaders will need to guide students [to a satisfactory resolution] before [the anniversary], so as to minimize potential instability.”

This year’s anniversary is all the more sensitive as it falls ahead of the 20th party congress later this year, during which CCP leader Xi Jinping is hoping to be voted in for an unprecedented third term in office.

The official website of the Tiananmen district management committee of the Beijing municipal government said on Tuesday it is suspending all spontaneous visits to Tiananmen Square through June 15.

Tourists wishing to view the square must book a slot a day in advance, have a green code on their COVID-19 test and trace app, and a negative PCR test from within the last 48 hours, it said. All visitors will have to pass through security checkpoints, as usual.

Meanwhile, Chaoyang district resident Ye Jinghuan said the area has been under tight restrictions for the past 20 days, with all residents required to work from home, and schools, restaurants and public transportation all shut down.

“The most unbelievable thing about this is that many communities are totally negative, and yet they are still under lockdown,” Ye told RFA.

“If you want to leave Shibalidian township, you need to get a pass, a PCR test certifcate and so on,” Ye said. “As of [Sunday], five Beijing districts have required residents to work from home and shut down public transportation.”