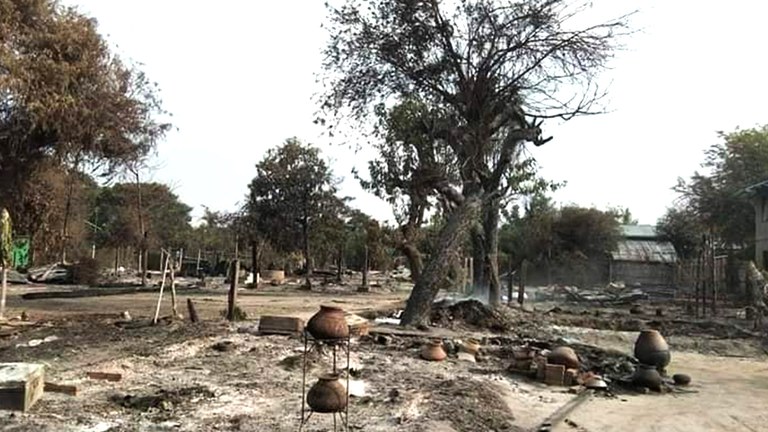 Myanmar junta troops on Tuesday briefly cut mobile phone service to eight townships in Sagaing region, leaving more than a million residents without cell access in an effort to mask the movements and operations of Military Council forces in the war-torn area, Myanmar sources say.

“Yes, the phone lines were cut off around 7,” a resident of Khin Oo told RFA, speaking on condition of anonymity for security reasons. “I found a missed-call notification on my phone earlier and now I’m calling you back, but even still the signal is dropping off now and then.

“The spot I’m speaking from now has a pretty strong signal, and there is also a place where you can get 2G internet service. But we have to find these kinds of places to make our calls go through,” he said.

“Service has been available on and off, but right now it seems to be working again,” said a villager in Sagaing’s Ye-U, where more than 150,000 residents have had trouble making and receiving calls since 6 a.m. “Earlier in the morning, both of my phones didn’t work.”

Local providers MPT and Telenor were both down, the source said, also declining to be named. “Service is okay one minute, and then the next it’s not,” he added.

Nearly 20 calls made by RFA to affected townships at around 10 a.m. failed to connect, while a call made in the afternoon to a resident of Monywa was blocked. Phone service was largely restored in the township by around 1 p.m., residents said.

Myo Swe, director general of the ruling Military Council’s Directorate of Communications, told RFA he was unaware of the reports of a cut-off in services. “I don’t know anything about this issue. We’ll take a look into that,” he said.

But a spokesman for the Myanmar Defense Force, an armed group set up to oppose junta rule, said that junta troops had cut phone service in Sagaing to prevent reporting of their activities and movements in the area.

“They don’t want news of their soldiers committing arson reaching the media and the international community,” the spokesman, Bo Taw Win, said. “We have video files of some of them burning houses, but we can’t upload them because of the weak signals. We can only upload photos.

“But they also want to cover up our victories. They don’t want people to know about the intensity of the fighting here, and they don’t want any aid from donors to reach us,” Bo Taw Win said.

Military activity had been reported in Kani and Ye-U townships after phone service was cut Tuesday morning, he added.

Northwest Myanmar’s Sagaing region has been the center of some of the strongest armed resistance to junta rule since the military seized power from the country’s democratically elected government in a Feb. 1, 2021, coup.