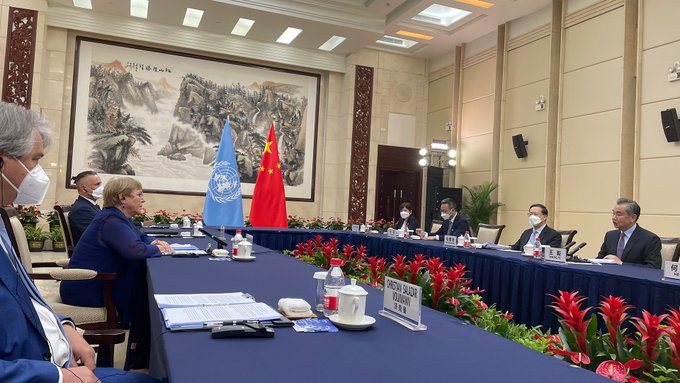 As U.N. human rights chief Michelle Bachelet continued her visit to China on Tuesday, friends of Shandong rights activist Li Yu said she has been incommunicado in recent days, and may have been detained.

Li, whose rights activism started when she tried to win redress through petitioning for the loss of her home and farmland, hasn’t responded to large numbers of messages via social media, and her account has been blocking friends without any explanation, her Los Angeles-based friend Jie Lijian told RFA.

“People from the petitioner community back home in China who were close to her haven’t been able to reach her,” Jie said. “We can’t reach her either, not on WeChat, and her phone is constantly turned off.”

“We are worried that Li Yu could have been illegally detained by the authorities again, kidnapped or placed under house arrest in a secret detention facility, ostensibly because of disease control and prevention,” Jie said.

“It’s hard to tell, because she has been cut off from all of us.”

Jie said Li has likely been detained, however, because she once told him that if she didn’t reply to his messages, it would be because she was under police surveillance or in detention.

A fellow petitioner from the northeastern province of Liaoning, Jiang Jiawen, said she hadn’t been able to get any response from Li either.

“I can’t get in contact with her, and I have tried every channel,” Jiang told RFA.

A call to Li’s cell phone resulted in an electronic message saying: “The number you have dialed is not in use. Please check and try again.”

Li is no stranger to harassment and detention by the authorities, and has already served two jail terms totaling six years for publicly commemorating the 1989 Tiananmen massacre.

At the time she went incommunicado, she was living at her mother’s home in Zaozhuang, Sichuan, and was under close surveillance by the authorities.

‘Picking quarrels and stirring up trouble’

Meanwhile, a court in the eastern province of Jiangsu has suspended the subversion trial of Xu Qin, a key figure in the China Rights Observer group founded by jailed veteran dissident Qin Yongmin.

Xu had been held on suspicion of “picking quarrels and stirring up trouble,” a public order charge typically used in the initial detention of activists and peaceful critics of the ruling Chinese Communist Party (CCP).

She had been a vocal supporter of a number of high-profile human rights cases, including that of detained human rights lawyer Yu Wensheng.

The Yangzhou Intermediate People’s Court said in an April 22 ruling that the trial had to be suspended “due to unavoidable circumstances,” but gave no further details.

However, Xu’s husband Tang Zhi said he wasn’t informed of the decision until a month later.

He said a lawyer had told him that the trial had been suspended at the behest of state security police, which he believes was the result of Xu’s refusal to plead guilty or “confess” to the charges against her.

“This has been postponed again and again; this is the sixth time now,” Tang said.

He said that Xu’s defense lawyer had been targeted for harassment by state security police after she insisted on defending her not guilty plea.

“The state security police drove to the lawyer’s law firm and spoke to the director, trying to get her to drop the case, and for her to be fired if she insisted on defending it,” Tang said.

A member of Xu’s Rose China, a sister group to the China Rights Observer, said the suspension of the trial didn’t mean the case had been dropped.

“The point of suspending the trial is to keep [her] in detention, rather than to conclude the case,” the member, who declined to be named, told RFA. “It looks as if she is being held in long-term detention, but with no conclusion [to the case].”

Xu, 60, is currently being held at the Yangzhou Detention Center, where she has been on hunger strike in protest at the loss of letter-writing and receiving privileges, and a months-long ban on meetings with her lawyer.

“She didn’t see her lawyer between Nov. 5, 2021 and Feb. 17 this year, and only then because she went on hunger strike to fight for her rights,” the Rose China member said.

Hundreds of rights organizations have expressed concern that Bachelet’s visit to China will result in her whitewashing the CCP’s human rights abuses.

Bachelet was presented with a selection of writings on human rights authored by CCP leader Xi Jinping on her arrival in the southern province of Guangdong on Monday.

Foreign minister Wang Yi quoted sections from the writings to Bachelet, saying China’s approach to human rights should work for the rest of the world, and that dialogue on the subject shouldn’t be “politicized” or make use of “double standards.”

Foreign ministry spokesman Wang Wenbin said the visit is expected to “enhance mutual understanding and cooperation, as well as to clarify misinformation,” in an apparent reference to Beijing’s claim that the mass incarceration of Uyghurs in Xinjiang and related policies aren’t a form of targeted totalitarian repression or genocide, as described by the U.S. and international rights groups.

Bachelet’s official Twitter account said merely: “We will be discussing sensitive, important human rights issues, and I hope this visit will help us work together to advance human rights in China and globally.”

Former 1989 student leader Zhou Fengsuo and founder of the rights group Humanitarian China said he hadn’t expected much from the U.N.

“The bigger the institution, the more it is controlled by the CCP,” Zhou told RFA. “It’s really outrageous to see Bachelet … not protesting at all, and happy to receive such nonsense from the dictator Xi Jinping.”

“This basically reflects the essence of her trip to China: it is to cooperate with the Chinese government to put on a show … it reflects the systemic corruption at the U.N.,” he said.

“We call on Bachelet to really listen to the situation of political prisoners such as Wang Bingzhang, Gao Zhisheng, Xu Zhiyong, and Zhang Zhan, and of course, check out the locations of the concentration camps in Xinjiang, where many people are locked up,” Zhou said.

“That’s what a human rights commissioner should do. I’ve never seen her commit to that, and it’s really reprehensible,” he said.

“The defenders we list have … been detained by the Chinese government for the sake of promoting democracy and progress in society,” Chen said. “These people are the hope of society; they represent justice, and its conscience.”