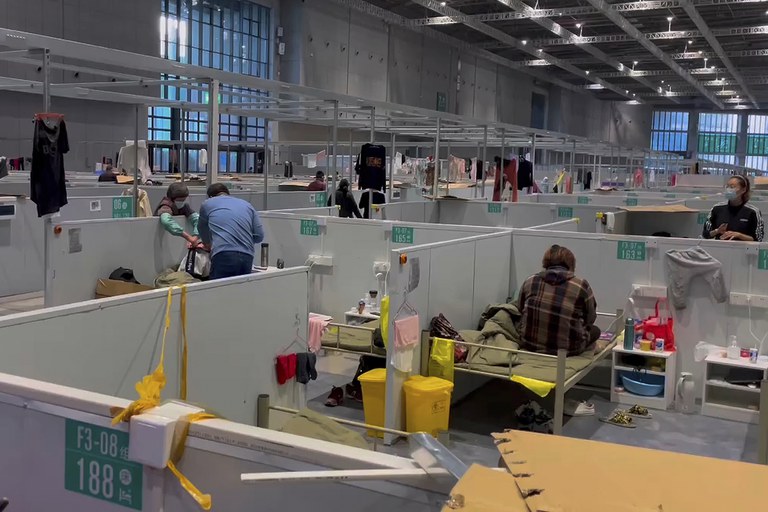 Authorities in Shanghai are warning the families of elderly people who have died of COVID-19 not to talk to the media, as the omicron outbreak rips through at least one hospital in the city, causing an unknown number of deaths.

At least 27 elderly people in Donghai Hospital in Shanghai’s Pudong New District have died of COVID-19, with many more deaths suspected as a result of an outbreak among staff and patients.

Some families have refused to have their loved ones’ remains cremated, and have been warned not to talk to foreign media by police, a person who has spoken to the families told RFA.

“A person identifying as a police officer told me that they are conveying a message to families from the internet police in Pudong; it’s not the hospitals that are contacting them,” Yue Ge, a Chinese YouTuber who has been following the outbreak among the elderly closely, told RFA.

“[This person] said they would let it go as understandable if they spoke to Chinese media, but that they mustn’t talk to foreign media, on pain of legal consequences,” Yue said.

The warning comes after several families of elderly people who died in the Donghai Hospital after being admitted for COVID-19 claimed that the hospital had under-reported the number of patients who have died of the disease.

“The families counted and found [references to] 27 bodies, which basically means that there were 27 dead bodies that tested positive for COVID-19,” Yue said.

“Some of the Donghai families are saying that the Donghai Hospital has totally failed to contain an outbreak [of nosocomial infections] that started in mid-April,” he said.

“According to their account, deaths are still happening there,” he said.

‘No means of controlling it’

Yue said the hospital is understaffed, with at least 80 percent of its staff dispatched elsewhere for disease control and prevention work, and elderly people admitted there aren’t being properly cared for or treated.

He said the figure of 27 deaths didn’t include people who had died there due to other causes than COVID-19.

Yue said large numbers of elderly patients with the virus are also being sent to temporary field hospitals or designated hospitals, with fears that some may even have died due to neglect or starvation.

“In the two weeks or more since the start of April, there have been four staff changes among the nurses on the ward where [some of the elderly patients] are,” Yue said. “Three of them were due to the fact that the nurses tested positive.”

“The fourth just got there … but the family fear that transmission is still occurring,” he said. “It seems they have no effective means of controlling it.”

“The nursing staff are already in full PPE, but transmission is still taking place; they can’t stop it, and the new nurses aren’t paying full attention to taking care of the elderly because they’re afraid of getting infected too,” Yue said.

Yue said there are also concerns that the hospital will start editing death certificates to suggest that COVID-19 wasn’t the primary cause of death, and that the patients had died “with” it rather than “of” it.

“They got the feeling that there is a certain amount of embellishment or editing of medical records going on after the event,” Yue said. “The official response is that the charts have to be written up after attempts to resuscitate someone.”

‘Who are people supposed to talk to?’

Wuhan-based activist Zhang Hai, who has campaigned for redress after his father died in the early days of the pandemic, said the government is suppressing a huge amount of information about the current outbreak.

“We don’t have a free press in China, so there are no reasonable channels available for us to tell the rest of the world what’s happening to ordinary people,” Zhang said. “This is because our domestic media organizations are all controlled by the government.”

“Who are people supposed to talk to, if not foreign media? Their loved ones have been treated unfairly and lost their lives,” he said.

“Anyone with a bit of courage would find it impossible not to speak out,” Zhang said.

Meanwhile, some residents of Shanghai have been posting notices in their doors and windows refusing to take any more PCR tests after many rounds of citywide mass testing.

“No PCR tests: negative antigen self tests,” read one notice, a photo of which was sent to RFA.

“Negative all along,” read another card.

The notices are an indicator of growing public anger at the citywide lockdown, which comes after the city’s leaders were repeatedly told to pursue the ruling Chinese Communist Party (CCP)’s zero-COVID strategy, regardless of how hard it was to keep 26 million people stuck at home amid lack of resources and food shortages.

Dozens of residents of one residential community responded with “we don’t want to,” after their neighborhood committee told them to line up downstairs for yet another round of PCR testing.

Many are unclear why they need to be repeatedly tested if they haven’t been outside their homes for weeks, according to Zheng Jianming, a resident of Jiading district.

“We have done more than 20 PCR tests, so what else is there left to do?” Zheng said. “We are all negative, we can’t go out, so we can’t get infected.”

“And getting a PCR test could put you at risk; we think it’s now the biggest source of potential infection,” he said. “We’ve all stopped going for PCR tests in the past few days; fewer and fewer people are doing them.”

“Some people have long suspected that this has to do with collusion [between government and vested interests],” Zhang said. “The director of the Beijing health commission lost his job over that, confirming the rumors.”

“We can see from the Shanghai outbreak that this is a road, this mass, compulsory PCR testing, that has led to the spread of the virus,” he said.

The CCP’s disciplinary arm announced on April 16 that Yu Luming, head of the Beijing municipal health commission, is currently under investigation for “serious disciplinary violations.”

Unconfirmed media reports have said the probe is linked to Yu’s involvement in PCR testing.

Wu Zunyou, chief epidemiologist of the Chinese Center for Disease Control and Prevention (CDC), said in a recent social media post that the public “misunderstands” the government’s “dynamic zero-COVID” policy, saying many confuse it with having zero infections as a goal.

“Even if community infections occur to some degree, as long as the cases account for a small proportion of the nationwide total, ‘dynamic zero-COVID’ can still be achieved,” he wrote.

He said the government doesn’t expect the country to reach a state of zero infections.

Jeering and negative comments on his post, with one saying it was “utopian,” and “blah-blah,” and another saying that most people loathe the current policy, were deleted by government censors.