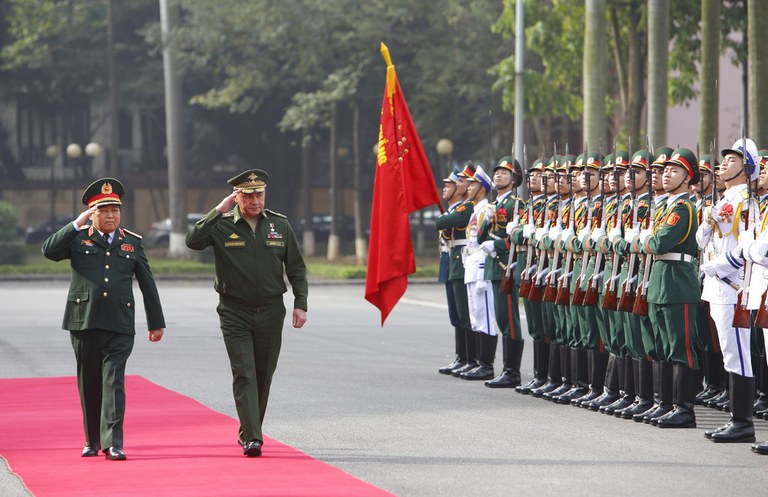 As fighting rages across Ukraine, Russia and Vietnam are planning to hold a joint military training exercise, Russian state media reported Tuesday, a move that analysts described as “inappropriate” and likely to “raise eyebrows” in the rest of the region.

It comes amid international outrage over Russia’s invasion of Ukraine and the mounting civilian death toll there. It also coincides with U.S. preparations to host a May 12-13 summit in Washington with the Association of Southeast Asian Nations, including Vietnam.

The two sides “agreed on the subject of the upcoming drills, specified the dates and venue for them” and “discussed issues of medical and logistic support, cultural and sports programs,” the news agency reported without giving further details.

Col. Ivan Taraev, head of the International Military Cooperation Department at the Eastern Military District, was quoted as saying that the joint exercise aims “to improve practical skills of commanders and staffs in organizing combat training operations and managing units in a difficult tactical situation, as well as developing unconventional solutions when performing tasks.”

The two sides also discussed what to call the joint exercise. One of the proposed names is “Continental Alliance – 2022.”

Vietnamese media haven’t reported on the meeting, nor the proposed exercise. Vietnamese officials were not available for comment.

“This is a totally inappropriate decision on Vietnam’s part,” said Carlyle Thayer, professor emeritus at the New South Wales University in Australia and a veteran Vietnam watcher.

“The U.S. is hosting a special summit with Southeast Asian leaders in May,” Thayer said. “How will the Vietnamese leader be able to look Biden in the eye given the U.S. clear stance on the Ukrainian war and the Russian invasion?”

“This is not how you deal with the world’s superpower,” he said.

Earlier this month, Vietnam voted against a U.S.-led resolution to remove Russia from the U.N. Human Rights Council. Before that, Hanoi abstained from voting to condemn Russia’s invasion of Ukraine at the U.N. General Assembly.

“As Russia’s closest partner in the region, Vietnam wants to demonstrate that it still has a firm friend in Southeast Asia,” said Ian Storey, senior fellow at the ISEAS-Yusof Ishak Institute in Singapore.

“But this joint exercise is likely to raise eyebrows in the rest of the region,” Storey said.

Vietnam and Russia have a long-established historical relationship that goes back to the Soviet era.

Russia is Vietnam’s first strategic partner, and one of its three so-called “comprehensive strategic partners,” alongside China and India. Moscow was also Hanoi’s biggest donor until the collapse of the Soviet Union and the Eastern Bloc.

“Vietnam’s nuanced approach to the Russia-Ukraine war and its refusal to single out Russia’s invasion suggest introspection in Hanoi over its foreign and defense policy calculations,” wrote Hoang Thi Ha, a Vietnamese scholar at the ISEAS – Yusof Ishak Institute.

The Russia-led war in Ukraine “presented a hard choice for Hanoi between preserving the fundamental principle of respect for a sovereign nation’s independence and territorial integrity and maintaining its good relations with Russia — a key arms supplier and a major oil and gas exploration partner in the South China Sea,” Ha said.

That explains Vietnam’s moves but there are distinctions between casting votes at the U.N. and holding joint military activities. The latter would send a wrong message about Vietnam’s intention to work with the West and raise its profile among the international community, analysts said.

In particular, the past decade or more has seen a notable growth in ties between the U.S. and Vietnam, which share a concern over China’s assertive behavior in the South China Sea.

Details of the proposed Russia-Vietnam exercise have yet to be made public, and already some observers are expressing doubts that it would take place.

A Vietnamese analyst who wished to stay anonymous as he is not authorized to speak to foreign media said the Russian side announced similar exercises in the past which didn’t materialize.

The Press Service of Russia’s Eastern Military District also said back in 2015 that the first bilateral military drill between Russia and Vietnam would take place in 2016 in Vietnamese territory.

The supposed drill was rescheduled to 2017 but in the end didn’t happen at all.

Vietnam has, however, taken part in a number of multilateral military exercises with Russia. The latest was the first joint naval exercise between Russia and countries of the Association of Southeast Asian Nations last December.

The Eastern Military District, headquartered in Khabarovsk, is one of the five operational strategic commands of the Russian Armed Forces, responsible for the Far East region of the country. The district was formed by a presidential decree, signed by the then-President Dmitry Medvedev in September 2010.