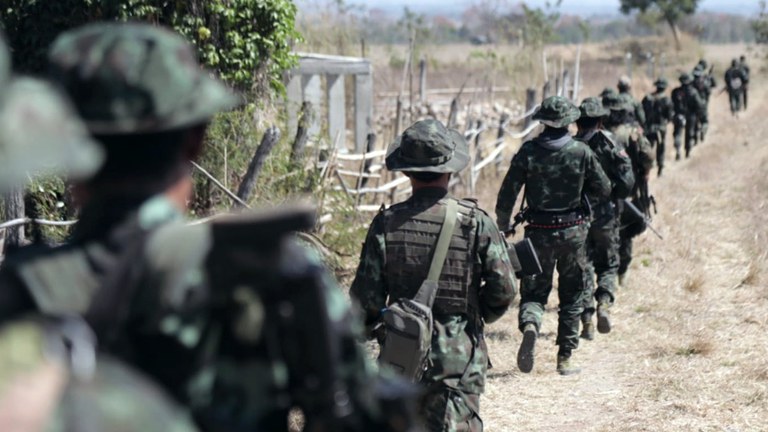 Junta chief Snr. Gen. Min Aung Hlaing marked the end of Thingyan on Sunday by declaring the Myanmar New Year a “year of peace,” even as the military continued an offensive in nine of the country’s 14 regions and armed resistance groups vowed to fight harder than ever.

“This year is the eve of the diamond anniversary of our Independence Day. Therefore, we must all strive hard to fully enjoy the fruits of independence and the essence of democracy,” the coup leader said in an address in the capital Naypyidaw at the close of the April 13-16 New Year Water Festival.

“That’s why we are doing our best to make this year a ‘year of peace’ and bring stability to the whole country.”

Min Aung Hlaing did not elaborate on how the military regime, which rights groups say has killed at least 1,769 civilians since its Feb. 1, 2021, coup, intends to carry out his vision.

Thingyan — normally a bustling and jubilant holiday — was eerily silent in Myanmar’s main cities of Yangon and Mandalay, as residents chose to boycott junta-led festivities and heed warnings by armed opposition forces that the areas could become the target of attacks.

An RFA investigation found that authorities arrested nearly 100 people in the two cities, as well as Myawaddy township in Kayin state, in the first 10 days of April as part of a pre-Thingyan crackdown. Some of those detained had joined anti-coup protests, while others were accused of being members of Yangon-based anti-junta paramilitary groups, including the People’s Defense Force (PDF).

Meanwhile, armed clashes between the military and joint anti-junta forces were in full swing through the New Year in Kayin, Kachin, Kayah, Chin and Rakhine states, as well as in Sagaing, Magway, Bago and Yangon regions, according to Karenni National Progressive Party.

Khoo Daniel, first secretary of the ethnic Karenni National Progressive Party, predicted that the fighting will get even worse in the new year with an expansion of war zones.

“The military situation is going to get worse as each and every group is preparing in their own way,” he said. “The [shadow National Unity Government (NUG)] itself has openly said it will launch military operations everywhere. So, it’s likely to be very tense.”

In 2021, the clashes were relatively minimal, he said, because there was “a lack of unity among the armed groups to fight the military junta.”

But Khoo Daniel said that the nation’s politicians and public now have a better understanding of why ethnic groups have taken up arms against the military and are more likely to throw their support behind them.

One group that has benefitted from such an alliance is the Karen National People’s Party in Kayin state, which has linked up with the Karen National Defense Force (KNDF) paramilitaries and other PDF units in neighboring Kayah and Southern Shan states to fight the military.

A member of the KNDF, who spoke to RFA on condition of anonymity, said the group hopes to open new fronts in the new year.

“As resistance fighters, our focus this New Year is to fight the junta together,” she said. “We hope to open several fronts across the whole country.”

The Free Tiger Rangers, a group loyal to the NUG’s Ministry of Defense that is attacking junta targets in Yangon, also said in a recent statement that its New Year resolution is to “defeat the military.”

Observers told RFA they expect the military to heavily crack down on the armed resistance this year if it hopes to find a solution to the country’s political crisis and hold a general election in 2023.

“What is special about this New Year is that we are seeing a lot of intense fighting between the military forces and the PDFs, as well as the ethnic armed groups. The clashes have intensified,” said Myanmar-based military analyst Than Soe Naing.

“I think both sides are hoping for a decisive situation and the armed conflict will likely intensify in the mountains, in the plains, and in the cities — in both rural and urban areas.”

Even if the military achieves its objectives, it is unlikely the country will be in any sort of state to hold a general election next year, he added.

Hein Thiha, a former high school teacher who has worked as a farmer since joining the anti-junta Civil Disobedience Movement, told RFA that the people of Myanmar showed how much they want a return to democracy by abstaining from celebrations for Thingyan, which he called the nation’s “most cherished festival.”

“The world can now see how our people are willing to sacrifice in the hope that democracy will one day flourish again,” he said.

NUG acting President Duwa Lashi La, meanwhile, vowed in a New Year’s address on Saturday to reclaim territory under military control and said he would do everything in his power to free the people from junta rule.

“The NUG has redoubled its efforts to build a peaceful federal democratic union and to provide people with the services they need with help from international organizations,” he said. “I can see a ray of light at the end of the tunnel, and we will make the people’s dream come true.”

The NUG said in a statement over the weekend that it is affiliated with 354 PDF units fighting the military and that more than 100 of them are working under its control. It said PDF and armed ethnic groups are now in control of “nearly 50 percent of the country.”

The end of Thingyan also saw the junta release more than 1,600 inmates from jail in a general amnesty on Monday, none of whom were political prisoners or journalists, according to observers and family members.

The junta pardoned 1,619 people, most of whom were said to be jailed for drug and immigration offenses, despite calls from rights groups and the international community to free the nation’s many prisoners of conscience detained for opposing military rule.

Junta chief Min Aung Hlaing said late last month that the amnesty was aimed at promoting “peaceful co-operation during the transition period” and the sentences of those convicted of “acts of terrorism” would not be commuted.

Htay Htay Win, the mother of Yan Paing Tun, who is serving a life sentence for violating the country’s anti-terrorism law, told RFA she had hoped her son would be among those released in the amnesty.

“If you asked me if I’d rather have a pound of gold or my son right now, I’d say straight away that I don’t need the money, only my son,” she said.

The family member of another prisoner, who declined to be named because of security concerns, said she had hoped for the release of her brother, who is serving a life sentence at Yangon’s Insein Prison, also for violating the Anti-Terrorism Act.

“It’s so sad that a lot of young, educated people, including my brother, have been arrested. This is very unfortunate,” she said.

“We heard that no political prisoners were among those released on New Year’s Day … I think [the junta is] making the country’s situation worse by releasing them. Security is already bad and with these people out on the streets, I think it’ll be worse than ever.”

Her brother is still facing charges in Insein Prison under the Anti-Terrorism Act after already given a life sentence by the junta for an alleged murder.

According to Thailand’s Assistance Association for Political Prisoners, the junta has arrested 13,282 people between Feb. 1, 2021, and April 15, 2022. Among them were 135 media personnel and 55 journalists, the Bangkok-based group said.

Ei Mon Phyo, wife of Ye Yint Tun, said that she had little hope that her husband would be freed after the junta failed to release him in two prior amnesties.

The reporter for The Herald Daily based in Irrawaddy region’s Pathein township was arrested on Feb. iou28 while photographing an anti-junta protest in Pathein and is serving a two-year jail sentence.

Analyst Than Soe Naing slammed the junta for “releasing the bad guys and arresting the good ones.”

“They continue to imprison politicians and let thieves, robbers, addicts and rapists roam the streets,” he said.

“They will be able to do what they want only when there are bad elements in society. I would say this is a policy that promotes a system of terrorists like them.”