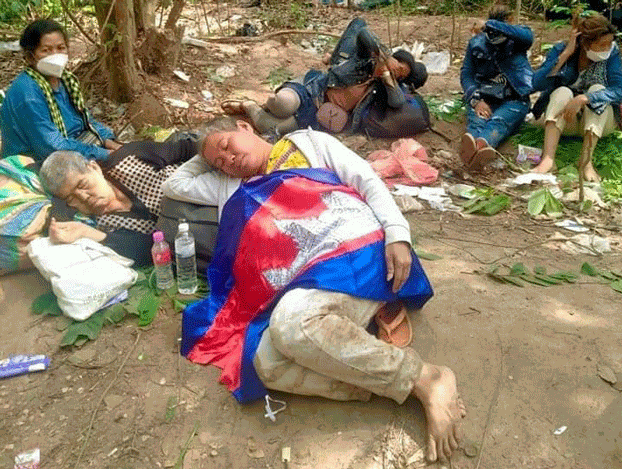 A prominent Cambodian activist fled to safety after receiving a death threat allegedly for joining street protests, while a member of a political party challenging Prime Minister Hun Sun’s government is also on the run after a court ordered him to appear on what he says are false charges.

Five years after strongman Hun Sen launched a crackdown against the political opposition and civil society, the country of nearly 17 million people that he has ruled since 1985 will hold local elections on June 5, followed by a parliamentary vote next year.

Opposition politicians, including those from the opposition Cambodia National Rescue Party (CNRP) that was banned during the 2017 crackdown, have faced harassment when trying to organize for the June elections.

Sat Pha, a CNRP supporter, said she believes a handwritten threat that authorities from Hun Sen’s one-party government posted the note on the door of her home.

The threat said, “You, contemptible, don’t be bold or you will be disappeared.”

Sat Pha said she has been on the run since April 16, fearing that she will meet the same fate as other opposition activists in Cambodia.

“[They] could put me in jail or make me disappeared or make me crippled for my whole life,” Sat Pha told RFA from an undisclosed location. “I see this dictatorial regime is good at beating people, killing people and throwing people in prison.”

She herself was released from prison six months ago after serving a year in detention for inciting social unrest during a peaceful protest in front of Chinese Embassy in Phnom Penh.

Prior to her imprisonment and following her release, Sat Pha participated in protests staged by fellow activist Theary Seng, a Cambodian American lawyer who is on trial in Phnom Penh for treason and incitement, and with relatives of political prisoners.

In a video clip apparently recorded in a jungle in neighboring Thailand and posted on Theary Seng’s Facebook page, Sat Pha said she left Cambodia under pressure from the government.

“They posted a life threatening message at my house after I arrived home from the Khmer New Year holiday,” she says in the video. “I beg for national and international help to find justice for me.”

Sat Pha also appealed to NGOs and the United Nations to help her remain safely in Thailand as a political refugee.

Speaking to RFA on Monday, Theary Seng called the threat against Sat Pha “a cowardly move by this dictatorial regime,” aimed at tamping down her protests that have tried to draw attention to the crackdown.

“She has received many threats in the past, but she has refused to give up her [street] protests. But this time I told her that her life is more important than joining protests with me. They have threatened her because she dares to join protests and do advocacy work with me.”

Sok Isan, spokesman of the ruling Cambodian People’s Party (CPP), told RFA that party authorities did not threaten Sat Pha and accused her and other activists of fabricating stories about political persecution to try to obtain asylum through the United Nations.

“It is a made-up show to invent a political incident, so she can claim political rights,” he said. “It has happened in the past. In Phnom Penh, the authorities are everywhere, so they would see it if someone posted such a message.”

Siam Pluk, a former opposition Candlelight Party member and president of the unregistered Cambodia National Heart Party, also fled to safety after the Phnom Penh Municipal Court issued an order for him to be apprehended for allegedly forging a document of party supporters, Theary Seng said.

Seng Theary said that the Phnom Penh Municipal Court issued an arrest warrant for Siam Phluk because he did not remain silent after the Ministry of the Interior refused to register his political party.

Ly Sokha, an investigating judge of the court, on April 4 ordered authorities to bring in Siam Phluk for questioning before April 25 in connection with allegations of fraud and the use of forged documents to form his party in 2021. The offense carries a maximum sentence of three years in prison.

After the ministry refused to recognize the new political party, Siam Phluk joined the Candlelight Party, which at one time was part of the Cambodia National Rescue Party (CNRP) that opposed Hun Sen’s government.

Cambodia’s Supreme Court dissolved the CNRP and banned 118 of its elected officials from politics two months later for the party’s alleged role in a plot to overthrow the government. The moves were part of a wider crackdown by Hun Sen on the political opposition, NGOs and the independent media that paved the way for his CPP to win all 125 seats in Parliament in the country’s July 2018 general election.

Soeung Sen Karuna, spokesman for the Cambodian Human Rights and Development Association (ADHOC), said political persecution has prompted opposition activists to flee to safety to Thailand, Malaysia and other countries, especially after the dissolution of the CNRP.

“Peaceful protests are the rights and freedoms of the people guaranteed by the constitution, so the authorities must not restrict the rights of citizens,” he told RFA.

Siam Phluk also provided support to striking workers of the NagaWorld Casino in Phnom Penh, who demonstrated near the casino to demand that it reinstate laid-off workers and recognize their union, Seng Theary said.

“Siam Phluk joined me to deliver drinking water to NagaWorld strikers a few times,” she said. “He stood in protest in front of the court each time I had a court hearing, and the authorities took pictures of him.”

RFA could not reach Siam Phluk for comment. In an interview with Radio France International his attorney, Sam Sokong, denied that his client had falsified fingerprints as alleged by the Ministry of the Interior. He also said that the order the Phnom Penh court issued for Siam Phluk’s arrest includes erroneous information.

Siam Phluk may still appear in the court on April 25 as judicial officials have ordered, Sam Sokong said.