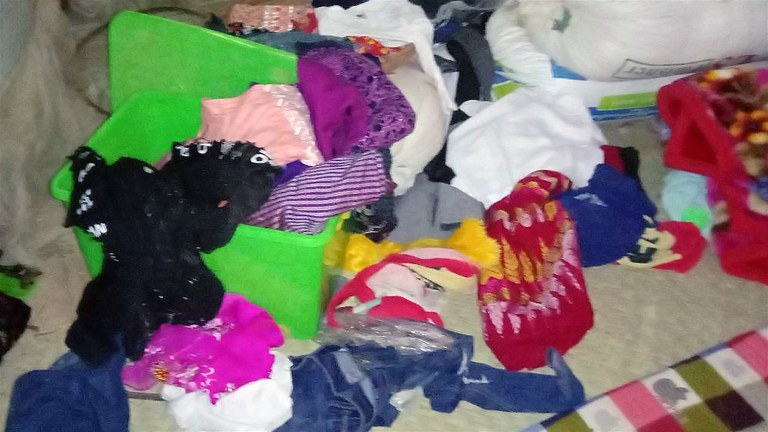 Residents of Pale township, in Myanmar’s embattled Sagaing region, said four people, including a teenage girl, were killed by junta troops after they returned to their village to feed their livestock following a military raid in the area.

Around 100 junta troops entered the village on July 10, forcing all residents to escape into the jungle, the sources told RFA Burmese. One resident, who spoke on condition of anonymity, said the victims were killed when they returned to the village that afternoon to feed their animals, thinking the troops had left.

“At about noon on July 10, [the troops] came in from the eastern part of the village. The whole village fled,” the resident said.

The troops finally left the village on July 11. Residents discovered the bodies upon returning to the area the following day, the source said.

Residents told RFA that Tin Maung’s body was found hastily buried in a shallow grave just outside the village tract. Moe Yee’s earrings had been removed from her body, they said.

It was not immediately clear which army unit raided Taung Ywar Thit on July 10. Residents said that while the troops had left the area, they dare not return to their village, fearing another attack.

Another resident of Taung Ywar Thit, who also declined to be named, told RFA that evidence of the killings had been documented on video.

“They went to feed their cows and pigs in the village and were shot dead by the junta soldiers,” the resident said.

“[The military has] no regard for human life. People were tortured and killed. We have video files recorded at the site of the murders of the women and the shallow grave — about 1.5 feet deep — where the man was buried.”

The resident said copies of the video files had been sent to a local unit of the anti-junta People’s Defense Force (PDF) paramilitary group, which said they would be forwarded to representatives of Myanmar’s shadow National Unity Government (NUG).

PDF sources told RFA that the victims were civilians and had nothing to do with the armed opposition.

Boh Naga, a member of a Pale township-based PDF group known as the Tawwin Nagar (Royal Dragon) Army, told RFA that junta troops have been attacking villages along the highway that snakes west through Sagaing and neighboring Magway region into Chin state every day since the beginning of July.

He said that people from several villages, including Taung Ywa Thit, have been arrested and killed as the military, which orchestrated a putsch on Feb. 1, 2021, tries to gain control of the strategic corridor.

“They seized power in a coup because they do not care about the people, and now they are focusing on crushing the armed resistance, giving priority to areas where the opposition is strong,” he said.

“The road from [the Magway city of] Pakokku and the road from [the Sagaing city of] Monywa meet here in Pale before proceeding north through [the Magway town of] Gangaw and on to Chin state. It is a strategic communication and transportation route for them, and as we are in full control of the area, they are attacking places where there are no PDF units and harassing and arresting ordinary people.”

Taung Ywar Thit village, where the bodies of the four victims were discovered on Tuesday, lies about 18 miles outside of the seat of Pale township, near the border with Magway region. The village comprises around 500 homes with a population of some 2,000 people.

Boh Naga said the junta is carrying out less of a military operation than “a brutal crackdown on civilians.”

A resident of Pale township, whose name was withheld over concerns for their security, told RFA that the military needs to be held accountable for its actions — particularly the crimes committed by members of its lower ranks.

“The military junta is trying to rule by fear and those responsible need to be prosecuted under the country’s anti-terrorism laws because their soldiers are committing torture and rape at gunpoint,” they said.

“Civilians are fleeing for their lives and those who cannot escape are arrested or killed. The people are completely defenseless and we are regularly seeing troops kill women and the young.”

The discovery of the victims in Taung Ywar Thit village came amid reports by area PDF groups on Wednesday that junta troops set fire to around 100 homes in Htay Aung village, located only one mile away in Magway’s Myaing township.

Thailand-based NGO Assistance Association for Political Prisoners says that junta forces have killed at least 2,081 civilians in Myanmar since the coup last year, but acknowledges that its documentation is incomplete, suggesting the death toll is likely much higher.