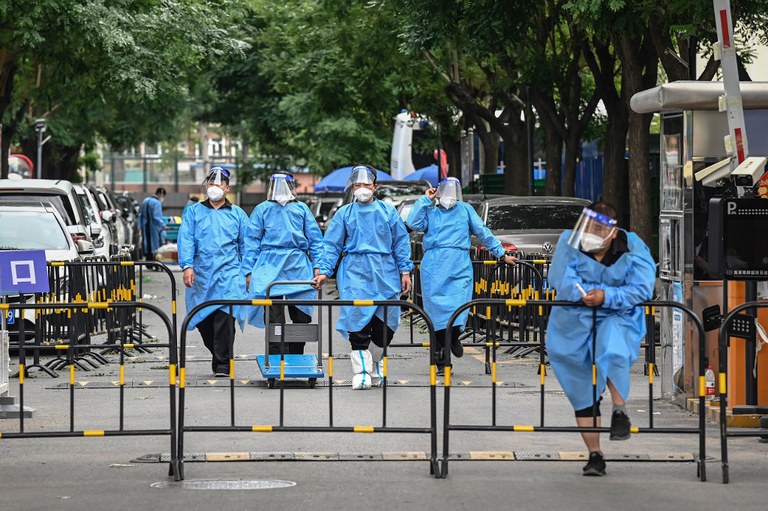 Linghu Changbing has been on the run from China for three years, using his Twitter account to post an account of a motorcycle trip in Mexico and further travels across the United States, to the envy of many in China.

While Linghu, 22, gets roundly criticized by Little Pinks, online supporters of the Chinese Communist Party (CCP), for his life choices, he is living a freedom that many back home caught in endless rounds of COVID-19 restrictions can only dream about.

His road-movie lifestyle puts Linghu at the cutting edge of a growing phenomenon among younger Chinese people with the wherewithal to leave the country, summarized by a Chinese character pronounced “run” that has come to symbolize cutting free from an increasingly onerous life under CCP rule in an online shorthand referencing the English word “run”.

Shanghai white-collar worker Li Bing has been dreaming about emigrating to Japan with his girlfriend and two beloved cats for three years now.

Li’s game-plan after graduating from university had been to get rich as fast as possible, but the COVID-19 pandemic and the Chinese government’s draconian zero-COVID policies has thrown several spanners in the works.

Li, as a devoted servant to his two cats, was terrified at online video footage of “Dabai” COVID-19 enforcers in white PPE beating people’s pets to death after they were sent to quarantine camps.

“One resident showed us through his camera lens those Dabai in PPE beating a pet to death,” Li said. “So my No. 1 nightmare is that my two cats could be disposed of [in that way].”

An engineer by training, Li now works as a highly paid copywriter in the tech industry in Shanghai, which he once viewed as a new land of opportunity.

But work has been hard-hit by the recent lockdowns, and the money isn’t coming in as frequently as it once did.

“Since the pandemic … the interval between payments is getting longer and longer,” Li said. “The lockdown made me even more aware that I can’t afford to wait any longer, because I don’t know what I’m waiting for.”

Li, who recently secured a short-term business visa for Japan and wants to apply to study there too, is definitely not alone.

Data from the social media app WeChat index showed a huge spike in searches using the keywords “emigration” or “overseas emigration” between March and May, suggesting that “run,” or running, is on many people’s minds.

At its peaks, search queries for the keyword “emigration” hit 70 million several times during the Shanghai lockdown and 130 million immediately afterwards.

The same keyword also showed peaks on Toutiao Index, Google Trends and 360 Trends between April and the end of June 2022, leading U.S.-based former internet censor Liu Lipeng to speculate that the most recent peak was triggered by a June 27 report in state media quoting Beijing municipal party chief Cai Qi as saying that current COVID-19 restrictions would be “normalized” over the next five years.

A Japan-based immigration consultant who gave only the pseudonym “Mr. Y,” said he had witnessed a massive surge in queries to his business starting in April.

“I’m also curious about what’s happened over the past month, and I think it’s amazing,” he said. “How can there be such a positive impact in little more than a month?”

Mr. Y said he, like many others in the sector, has started taking to Twitter Spaces to provide listeners with free advice on immigrating to Japan.

“I see seven or eight spaces about how to run, all of them with nearly 1,000 people in them,” he said.

A Shanghai-based businessman surnamed Meng, who has a U.S. green card, found himself pressed into service as an informal immigration consultant during the Shanghai lockdown.

“Only one person asked me about this … before lockdown,” said Meng, not his real name. “All the others came to ask me when we were locked down at home.”

Australia-based writer Murong Xuecun said he had left after correctly predicting the steady erosion of individual freedom in China.

“In the past few years … government has become more and more powerful, and the rights of ordinary people have dwindled,” he told RFA. “What kind of China will we see next?”

“A more conservative, isolated and poorer China, and I think also a [more unpredictable and violent] China,” he said. “That’s what a lot of people worry about.”

Many are aware that since Xi Jinping came to power, the government has made rapid advances in the direction of high-tech totalitarianism.

A combination of a nationwide, integrated facial recognition network, a health code app that can prevent movement in public spaces under the guise of COVID-19 prevention, and the use of automated fare collection systems to track people on public transportation have combined to place severe limits on the personal privacy and freedoms of the average person in China.

Meanwhile, the population is still struggling with the massive economic impact of rolling lockdowns, compulsory waves of mass COVID-19 testing and inflation that has characterized the pandemic in China.

A wave of regulatory policies targeting the private sector, most notably private education and China’s tech giants, has has also taken its toll on the perception of the level prosperity and freedom that is realistically achievable for regular Chinese citizens, even those with well-paid jobs.

Meng’s Shanghai business has downsized from 140 employees to around 50 in recent years.

“I deal with local officials and am affected by this … there are too many examples of unreasonable stuff that makes life difficult,” he said, adding that he is ready to dispose of some 10 million yuan in assets and leave the country for good.

“It wouldn’t really be the first choice for someone like me who was born and raised in China, and mostly educated here to go to a new environment,” Meng said. “But now that I’m totally disappointed with China, I think I need a new first choice.”

Not everyone is able to leave, however. Border guards have warned people not to embark on “unnecessary” overseas trips, and have begun clipping people’s passports when they arrive back in the country, to prevent them from leaving again.

Meng says most of those seeking immigration advice from him are in the same social class as himself, and many are seeking an insurance policy rather than planning their permanent departure.

Linghu left three years ago despite being in a far less privileged position than Meng.

After leaving high school with no diploma and working a slew of short-term and gig economy jobs in factories or the service sector, he says doesn’t believe the myth that hard work alone is enough to improve a person’s life.

“If working hard got you anywhere, then a lot more people would do it,” he said. “But if you look at the richest families, there’s not a single one that doesn’t contain [a CCP] official, or is related to one.”

Linghu entered the U.S. illegally from Mexico, after traveling through Central Asia, Europe and South America.

He now hopes to stay, and plans to work as a decorator in California.

“Freedom is a human right, and my ideal country is one with human rights,” he said.