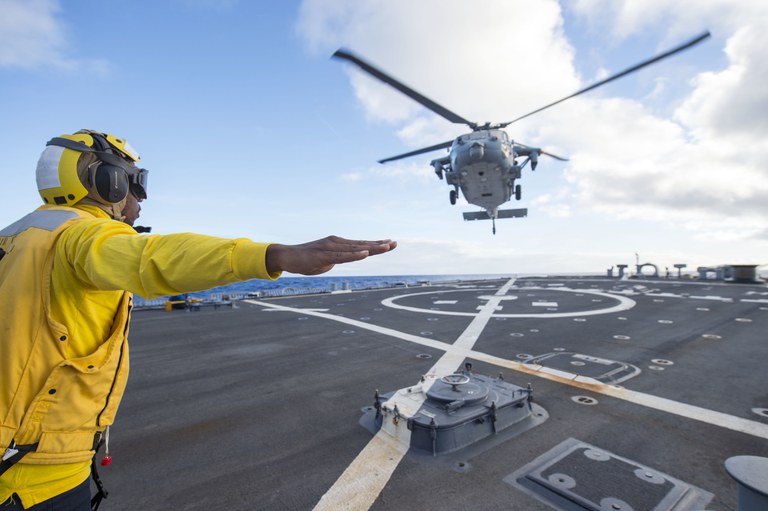 A U.S. Navy Freedom of Navigation Operation (FONOP) near the Paracel Islands in the South China Sea on Wednesday has drawn a strong reaction from Chinese military officials who said the U.S. warship “illegally trespassed” into its waters.

A spokesman from the Southern Theater Command of the People’s Liberation Army (PLA), whose areas of responsibility include the South China Sea, said in a press release that the command “organized air, naval forces to track and warn away USS Benfold destroyer that illegally trespassed into Chinese territorial waters off Xisha Islands.”

Xisha is the Chinese name for the Paracel archipelago, claimed by China, Vietnam and Taiwan but entirely under Chinese control.

The destroyer then “exited the excessive claim and continued operations in the South China Sea,” according to the statement which said that the U.S. “challenges excessive maritime claims around the world regardless of the identity of the claimant.”

“Unlawful and sweeping maritime claims in the South China Sea pose a serious threat to the freedom of the seas, including the freedoms of navigation and overflight, free trade and unimpeded commerce, and freedom of economic opportunity for South China Sea littoral nations,” the 7th Fleet said.

“Under international law, as reflected in the Law of the Sea Convention, the ships of all States, including their warships, enjoy the right of innocent passage through the territorial sea,” it said.

Brunei, China, Malaysia, the Philippines, Taiwan and Vietnam hold competing claims over parts of the South China Sea and some islands in it but the Chinese claims are by far the most expansive, covering up to 90% of the sea.

Beijing also developed islands that China occupies in the South China Sea to back up its claims and has fully militarized at least three of them.

An international tribunal in 2016 ruled that the Paracels are in fact not islands and the occupying nation – China – cannot claim territorial sea around them.

The lengthy statement by the U.S. 7th Fleet said by conducting this FONOP, “the United States demonstrated that these waters are beyond what the PRC [People’s Republic of China] can lawfully claim as its territorial sea.”

“U.S. forces operate in the South China Sea on a daily basis, as they have for more than a century,” it added.

In another development, a U.S. carrier strike group led by the USS Ronald Reagan has moved into the South China Sea.

The U.S. Navy said in a press release the strike group is operating in the South China Sea “for the first time during its 2022 deployment.”

It includes the USS Ronald Reagan, the navy’s only forward-deployed aircraft carrier, with aircraft from Carrier Air Wing (CVW) 5 and crews from Task Force 70 and Destroyer Squadron (DESRON) 15. The Ticonderoga-class guided-missile cruiser USS Antietam (CG 54) and the Arleigh Burke-class guided-missile destroyer USS Higgins (DDG 76) are also involved in the operation, according to the release.

“While in the South China Sea, the strike group is conducting maritime security operations, which include flight operations with fixed and rotary-wing aircraft, maritime strike exercises, and coordinated tactical training between surface and air units,” it said.

China’s South China Sea Probing Initiative (SCSPI) think-tank said that, according to the latest flight trajectory of the carrier-borne C-2A Greyhound cargo aircraft, the USS Ronald Reagan is sailing on Wednesday just south of the Spratly Islands, some 1,000 kilometers from the Vietnamese city of Danang.

Vietnamese sources told RFA last week that the Nimitz-class, nuclear-powered aircraft carrier plans to visit Danang in the second half of July, an event that would draw criticism from China.

The U.S. Navy declined to confirm the visit, saying “as a matter of policy, we don’t discuss future operations.”