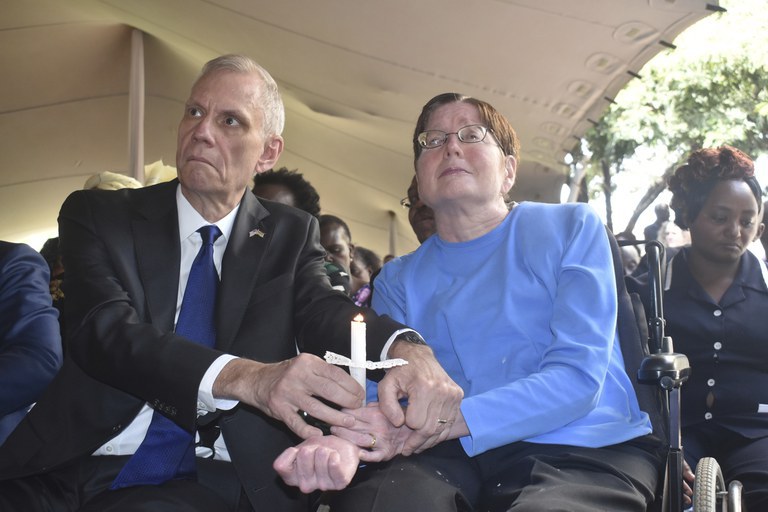 The Biden administration’s nominee for U.S. ambassador to Thailand told a Senate committee Wednesday that he would press Bangkok to reduce its dependence on oil and gas from neighboring Myanmar, where the ruling military junta is committing “horrifying atrocities.”

Robert F. Godec made the pledge in response to a question from Sen. Ed Markey, who, citing a statement from Human Rights Watch, noted that Thailand receives 80 percent of oil and gas exported by Myanmar’s government.

“We are seeking ways with the Thais to increase the pressure on the Burmese regime. All options are on the table, that includes further action in the oil and gas sector,” Godec told a Senate Foreign Relations panel here questioning him and three other nominees for ambassador posts in the Asia-Pacific region as well as a nominee to serve as the U.S. representative to the Association of Southeast Asian Nations (ASEAN).

Godec promised committee members that he would focus on efforts to work with Thailand to pressure its neighbor.

“The Burmese regime continues to carry out horrifying atrocities. It is critically important that this stop,” he said using the old name for Myanmar. “Burma and the Burmese regime’s horrifying actions have been a top issue in discussions with Thailand.”

According to the statement released by Human Rights Watch in January, the state-run Petroleum Authority of Thailand (PTT) is responsible for the largest gas revenues paid to junta-controlled accounts through its purchases of about 80 percent of Myanmar’s exported natural gas from the Yadana and Zawtika gas fields. It said natural gas generates about U.S. $1 billion in foreign revenue annually.

“I’ve repeatedly called for the United States to take a page out of the EU’s playbook and sanction the Myanmar oil and gas enterprise,” Markey, a Massachusetts Democrat, told Godec, referring to the European Union.

Since seizing control of Myanmar through a February 2021 coup that ousted a democratically elected civilian-led government, the Burmese junta has jailed opposition leaders and launched attacks that have killed more than 2,000 civilians, according to the Assistance Association for Political Prisoners, an NGO based in Thailand.

The hearing on Capitol Hill followed Sunday’s visit to Bangkok by U.S. Secretary of State Antony Blinken who took a hardline stance against the Myanmar government after meeting with Prime Minister Prayuth Chan-o-cha, the former Thai army chief and ex-junta leader who spearheaded a coup in 2014.

Blinken said the Thai and other governments in Southeast Asia must push the Burmese junta to end its brutal violence and steer the country back on a path to democracy, as he called on Myanmar to institute the Five-Point Consensus it agreed to in April 2021.

The consensus, hashed out during an emergency summit of Southeast Asian leaders in Jakarta that month, called for an immediate end to violence in the country, the distribution of humanitarian aid, dialogue among all parties and the appointment of an ASEAN special envoy to Myanmar who would be permitted to meet with all stakeholders.

“Unfortunately, it is safe to say that we have seen no positive movement. On the contrary, we continue to see the repression of the Burmese people,” Blinken said, noting that members of the opposition were in jail or in exile. “The regime is not delivering what is necessary for the people.”

In its January statement calling out PTT for its oil purchases, HRW noted that petroleum giants Chevron and TotalEnergies had announced plans days earlier to pull out of Myanmar.

Months earlier, the New York-based human rights watchdog had joined 76 NGOs in calling for PTT to not expand its oil business ties with the junta, noting that the state-owned petroleum company had been involved in exploration in Myanmar for three decades and had paid billions of dollars to the neighboring government.

“But with production declining in recent years, the company has ramped up its midstream and downstream investments in the country, with the stated goal of becoming the ‘top Myanmar provider’ of petroleum products,” HRW said in May 2021.

Thailand’s military-dominated government has enjoyed close ties with the Burmese military and been slow to criticize its neighbor since the generals seized power there last year.

Earlier this month, Prayuth played down reports of a Burmese fighter jet entering Thailand’s airspace amid fierce fighting across the border, even though the Thai air force had scrambled two jet-fighters during the incident.

“It looks like a big deal but it’s up to us to not make a mountain out of a mole hill – we have a good relationship,” he said at the time.

Godec, a long-time diplomat served most recently as acting assistant secretary for the Bureau of African Affairs, a post he assumed on Jan 20, 2021 – the date of President Joe Biden’s inauguration – until Sept. 30, 2021. He had previously served as ambassador to Kenya.

The Senate committee did not take any action at the end of Wednesday’s hearing.