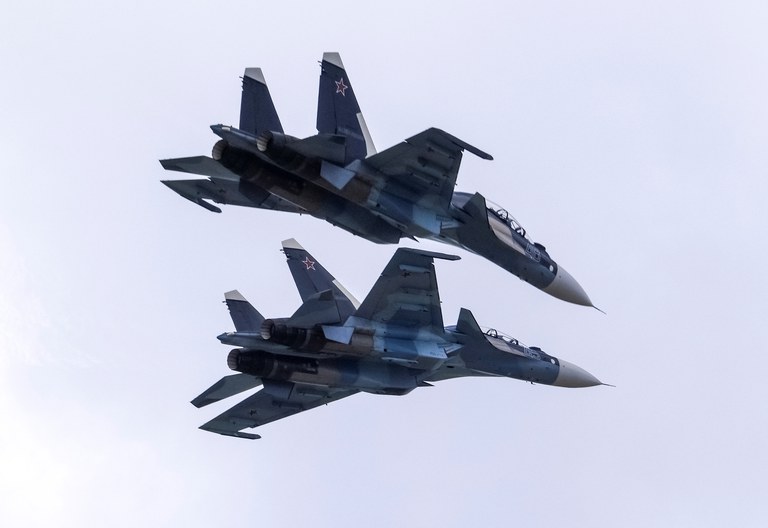 Myanmar junta chief Snr. Gen. Min Aung Hlaing held talks with officials from Russia’s Ministry of Defense in Moscow this week, according to media reports, raising fears the junta is seeking new weapons to turn the tide in its fight against the country’s armed opposition.

The regime leader met with unspecified “Russian defense ministry officials” on July 11, a day after he arrived in Russia for a “private visit,” the junta said in a statement on Tuesday.

On Tuesday, Reuters news agency quoted a Russian defense ministry statement as saying that Min Aung Hlaing had met with “top officials” from the ministry and “discussed ways to strengthen bilateral military cooperation.”

Notably, no mention was made of a meeting between Min Aung Hlaing and his counterpart, Russian President Vladimir Putin, or even the country’s Minister of Defense, Sergei Kuzhugetovich Shoigu.

The trip marks the junta chief’s second visit to Russia in the more than 17 months since Myanmar’s military seized control of the country in a Feb. 1, 2021 coup.

While Western nations were quick to impose sanctions on Myanmar over the coup, Russia has continued to supply Myanmar’s military with weapons and helicopters despite its continued and documented crackdown on civilians, killing at least 2,081 since coming to power.

International media had reported that Myanmar purchased at least six SU-30 multi-role fighter jets from Russia before the military takeover, a transaction that was confirmed to RFA Burmese by Capt. Zay Thu Aung, a Myanmar air force officer who has since defected and joined the anti-junta Civil Disobedience Movement.

Zay Thu Aung said at least two of the six jets have been stationed in Myanmar’s capital Naypyidaw since March this year and that a team of Russian pilots and technicians has been training Myanmar pilots and crews.

“Six were purchased, but only two of them had been delivered by 2020. The rest won’t be delivered until this year,” he said.

“It was agreed beforehand that Russian crews would be sent to train local officers on aircraft assembly and maintenance. Once the jets are ready, Russian test pilots will arrive to test the aircraft before handing them over. It was agreed to in advance.”

Thein Tun Oo, director of the Thayninga Strategic Studies Group, a Myanmar-based think tank run by former military officers, said he knew the military had been ordering SU-30 fighter jets “for some time.”

“It’s been a long time since the SU-30s were ordered. The delivery has long been delayed,” he said.

“We heard all kinds of news about the aircraft, such as that they were ‘being updated’ and made more ‘compatible for Myanmar.’ Anyway, it’s time they should be delivered. Taking into consideration the time of production of the aircraft and signing of the contracts, it’s the right time for delivery and I think it’s very possible that they will be here soon as we are hearing about them [from the military] now.”

Thein Tun Oo noted that Myanmar and Russia have a history of military cooperation and said it is customary for experts from the country where the equipment was purchased to come and train local crews.

The 70-ton SU-30 fighter jet can also fly across the 1,275-mile north-south expanse of Myanmar, if needed, without needing to refuel, owing to its large fuel capacity, according to weapons experts.

Observers say Myanmar’s military regularly purchases Russian-made fighter jets and other powerful weapons to fight groups such as the Karen National Union (KNU) and the Kachin Independence Organization (KIO), which are among the country’s most powerful and well-equipped ethnic armies.

In June, the junta carried out airstrikes on KNU and Karen National Defense Organization (KNDO) coalition forces who had attacked a military camp in Ukrithta village, in Kayin state’s Myawaddy township. Days of fighting ended with heavy casualties on both sides.

KNDO leader, General Saw Nedar Mya, told RFA that the military has yet to deploy sophisticated fighter jets like the SU-30 in airstrikes, opting instead to use older Russian-made MiG-29s.

“They used jet fighters in the airstrikes on Ukrithta. They attacked us every day, for five days, day and night,” he said.

“Since the military dictator is getting support from China and Russia, the West should be backing us. But even though [the junta is] buying all kinds of fighter jets and other weapons, their people lack a fighting spirit. Our people have conviction and are in high spirits.”

Australia-based military and security analyst Kyaw Zaw Han said relations between Moscow and the junta have reached “an unprecedented level” since the coup.

He said the military’s use of sophisticated weapons, including fighter jets, in Myanmar’s civil war could lead to an increased death toll for the armed resistance.

“The junta seems to have viewed Russia as a strategic partner from the beginning. This seems to be the case for both countries. And since the Feb 1 coup, the number of reciprocal visits has increased to an all-time high,” he said.

“Russian-made weapons are increasingly being used in the civil war and they have had a huge impact … The use of these warplanes in the internal conflict has resulted in a huge increase in the number of refugees and internally displaced persons.”

He said frequent visits by delegations and top officials, as well as various rounds of talks on military and economic cooperation, have led to significantly strengthened ties between Russia and Myanmar since the coup. Min Aung Hlaing notably hosted Russia’s Deputy Defense Minister Lt-Gen Alexander V. Fomin in Myanmar’s capital Naypyidaw in March of last year, less than two months after ousting the democratically elected government.

According to the website Global Firepower, which tracks the development of military forces from around the world, Myanmar maintains a fleet of 280 aircraft, including fighter jets and attack helicopters, 664 tanks, and 155 warships, including one submarine.

In February, former U.S. Rep. Tom Andrews, who serves as U.N. special rapporteur on human rights in Myanmar, said in a report to the U.N. Security Council that countries should stop selling arms to the junta, citing a brutal crackdown on civilians since the coup.

The report called out permanent Security Council members China and Russia, as well as India, Belarus, Ukraine, Israel, Serbia, Pakistan and South Korea, for selling the weapons, which Andrews said are almost certainly being used by the military to kill innocent people.