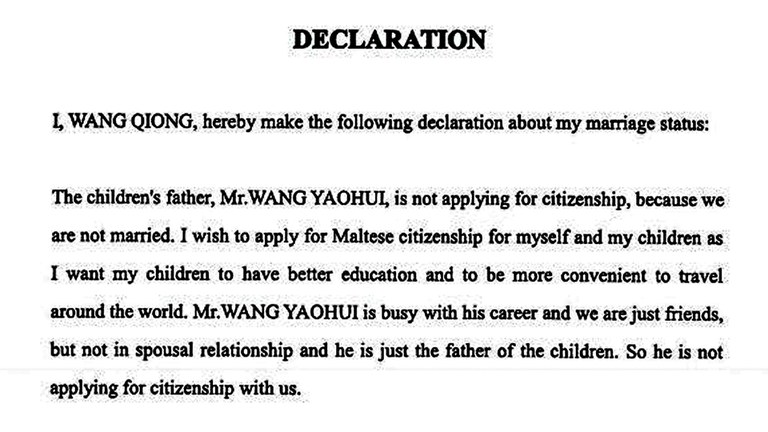 There’s another plot twist in Chinese-businessman-turned-Cambodian diplomat Wang Yaohui’s secretive investment in a prominent English soccer club. RFA can reveal that two mothers of his children were employed by a company associated with Yaohui, Chigwell Holdings Ltd.  The company acquired a sizeable stake in Birmingham City Football Club back in 2017.

​Just weeks ago, the English Football League said it was looking into reporting by RFA that Yaohui and a man said by former associates to be a close relative and frequent proxy for Yaohui control a large stake in the club through a series of offshore shell companies.

Yaohui’s undeclared ties to Chigwell Holdings – yet another entity owning shares in the club – is likely to factor into that investigation. Under its rules, the league requires clubs to publicly disclose the identity of any person controlling more than 10 percent.

Yaohui was born in China but as RFA has reported, became a naturalized Cambodian citizen in 2014 after a checkered business career characterized by secretive dealings and bribery scandals in China and Africa where associates were convicted although Yaohui himself was not charged.

If his corporate interests have been complex, the same can be said of his personal life. Despite having spent the last 15 years or so living as man and wife with Chinese film star Tang Yuhong, Yaohui has had at least five children by two other women in that time.

The mothers, Wang Jing and Wang Qiong, were born seven years apart during the 1980s in Sichuan province, China. In 2015, both women approached Henley & Partners, a broker for citizenship-by-investment schemes, seeking to acquire Maltese passports for themselves and their children. Multiple documents obtained by RFA, including the children’s birth certificates, show that their children shared a common father, Yaohui.

A review of that data also revealed that from 2015 onwards, the women were both employed in the accounting department of Chigwell Holdings Ltd, a Hong Kong-based real estate holding firm connected to Yaohui, although the detailed biographies provided by both women as part of their Maltese citizenship applications indicated no educational background or employment history in finance or bookkeeping.

Regardless of their seeming lack of experience, they were handsomely compensated. HSBC bank statements for an account in Jing’s name show monthly deposits of HKD$36,500 ($4,650) from the company. Statements for Qiong’s account show her receiving the slightly higher HKD$44,500 ($5,670) each month.


Both women also provided letters signed and stamped by Helen Ho, human resources manager at Chigwell Holdings, attesting to their employment by the firm. Ho’s name and phone numbers both appear in Yaohui’s Hong Kong passport as his emergency contact person.

Hong Kong corporate records also show that in April 2017 the assets of Chigwell Holdings were used to secure a $40 million loan to Yaohui – suggesting that he has considerable influence over the company’s decision-making and the property under its management.

Buying into the game

When eight months later, on Dec. 14, 2017, Chigwell Holdings acquired 500 million shares in a company listed on the Hong Kong stock exchange, Yaohui’s name was nowhere on the associated disclosure.

Under Hong Kong law, companies owning significant stakes in companies listed on the stock exchange are required to disclose their stakes, as well as the identity of their beneficial owner.

The company Chigwell Holdings had bought the 500 million shares in was Birmingham Sports Holdings Ltd, which at the time owned 96.64 percent of Birmingham City Football Club.

At the time, Chigwell Holdings’ 500 million shares accounted for 5.97 percent of Birmingham Sports Holdings’ total stock, or 5.76 percent of the club.

On the same day, another company bought an even larger chunk of shares in Birmingham Sports Holdings. Registered in the British Virgin Islands, Dragon Villa Ltd also omitted to mention its ties to Yaohui when it acquired just over 714 million shares, equivalent to 8.23 percent of Birmingham City Football Club at the time. However, earlier this year, RFA reported on evidence it had seen strongly suggesting that Yaohui is in fact Dragon Villa’s owner. The key piece of evidence was an affidavit submitted to a Singapore court on behalf of Yaohui’s longtime right-hand woman, Taiwanese-American dual national Jenny Shao. In the affidavit, Shao claimed that Dragon Villa “is beneficially owned by Mr. Wang [Yaohui].” A beneficial owner is a person who enjoys the benefits of owning a company which is in someone else’s name. Her testimony was echoed by multiple former business associates of Yaohui whom RFA spoke with.

But why would Yaohui want to obscure his stake in an English football club, something normally considered a prestige purchase? And perhaps more perplexingly, if he does indeed control Chigwell Holdings and Dragon Villa, why go to the trouble of splitting the purchase of shares in Birmingham Sports Holdings between the two companies when they took place on the same day?

We may never know the true answer since representatives of both companies have not responded to repeated requests for comment in recent months.

The combined stakes of the two companies represent more than 10 percent of Birmingham City Football Club  – therefore exceeding the threshold at which clubs are required to publicly disclose the identity of a stakeholder, under the rules of the English Football League, which administers and regulates the Championship League the club plays in.

The League told RFA last month that it was investigating whether its rules on those disclosures had been breached regarding Dragon Villa. Approached about Yaohui’s links to Chigwell Holdings, the League declined to comment further.

Sources who have worked with Yaohui recalled him as almost pathologically shy of publicity, preferring to use proxies wherever possible rather than put his name on any corporate paperwork. Ten years ago, when he found himself accused (although never charged) of bribing a senior executive at a Chinese state-owned bank, the South China Morning Post described him as “low-profile but well connected.” Apparently not low-profile enough, though. Around that time, Yaohui’s name began to be removed from lists of shareholders and directors in mainland Chinese companies.

In more recent years, the complexity and secrecy of his dealings could reflect worries about drawing attention to his new benefactors. By December 2017, Yaohui had been the owner of a Cambodian diplomatic passport for more than two years. He was an advisor to Prime Minister Hun Sen and minister-counsellor to the Cambodian embassy in Singapore. The passport gave a new name for Yaohui, Wan Sokha.

That name appears in the lists of directors and shareholders for nine Cambodian companies. But in 2017, Wan stepped aside at many of those companies to be replaced by another Chinese-born Cambodian citizen, Vong Pech.

Prior to becoming a naturalized Cambodian, Vong’s name was Wang Dong. Multiple sources familiar with Yaohui’s business practices told RFA that Vong is a close relative of his and a frequent proxy for him in business. As with other sources in this story, they requested anonymity as a condition of disclosing the information.

The sum of their parts

After months of takeover rumors, Birmingham Sports Holdings announced on June 14 this year that two days earlier Vong had reached an agreement to sell the 21.64 percent stake to an unnamed third party. The announcement stressed, however, that “the Company has not entered into nor exchanged any agreement to dispose of its approximately 75% interest in” the club. As such, even when Vong’s sale goes through, he and Yaohui will still constitute the largest single bloc of ownership at the club.

Birmingham City has long denied Yaohui’s existence as a stakeholder in the club and a spokesman told RFA in late May that it was a longstanding position of the club not to comment on matters of ownership. However, as the evidence mounts linking him to three of the club’s top-four biggest shareholders, that line may be a difficult one to maintain.