The struggle for a free Tibet and His Highness Dalai Lama

The 14th His Holiness Dalai Lama, Tenzin Gyatso, turns 87 on July 6th, 2022. He was Born on 6 July 1935, or in the Tibetan calendar, in the Wood-Pig Year, 5th month, 5th day. He is known as Gyalwa Rinpoche to the Tibetan people, is the current Dalai Lama, and the highest spiritual leader and former head of state of Tibet.

It has been over six decades since he started living in India. He calls himself a “son of India”. His birthday celebrations, each year, in India’s Dharamshala in the state of Himachal Pradesh had always been one of the biggest events for the Tibetan community. The central government of Tibet, the Ganden Phodrang, invested the HH Dalai Lama with temporal duties until his exile in 1959. On 29 April 1959, the HH Dalai Lama established the independent Tibetan government in exile in the north Indian hill station of Mussoorie, which then moved in May 1960 to Dharamshala, where he resides. He retired as political head in 2011 to make way for a democratic government, the Central Tibetan Administration.

His Holiness began his monastic education at the age of six. The curriculum, derived from the Nalanda tradition, consisted of five major and five minor subjects. At 23, His Holiness sat for his final examination in Lhasa’s Jokhang Temple, during the annual Great Prayer Festival (Monlam Chenmo) in 1959. He passed with honors and was awarded the Geshe Lharampa degree, equivalent to the highest doctorate in Buddhist philosophy.

In 1950, after China’s invasion of Tibet, His Holiness was called upon to assume full political power. In 1954, he went to Beijing and met with Mao Zedong and other Chinese leaders, including Deng Xiaoping and Chou Enlai. Finally, in 1959, following the brutal suppression of the Tibetan national uprising in Lhasa by Chinese troops, His Holiness was forced to escape into exile. In exile, the Central Tibetan Administration led by His Holiness appealed to the United Nations to consider the question of Tibet. The General Assembly adopted three resolutions on Tibet in 1959, 1961, and 1965.

On 10 March 1959, more than 10 thousand Tibetans gathered in front of Norbulingka Palace, Lhasa to prevent His Holiness Dalai Lama from going to a performance at the Chinese Army Camp in Lhasa. On the fateful day of 15th March 1959, Chinese troops placed outside Norbulingka Palace fired artillery shells.

The interim government of Tibet was proclaimed by His Holiness at Lhuntse Dzong, Tibet in March 1959. Tibetan Government was formally reestablished here.

On the 17th of March, His Holiness escaped from Norbulingka Palace in the middle of the night and after 14 days of wandering and harrowing escape he entered India from Tibet on the 31st of March.
This is the escape route of His Holiness as illustrated in his memoir, “My land and My people”.

After all this fiasco on the 18th of April 1959, His Holiness Dalai Lama held an international press conference and formally repudiated the 17-Point Agreement. The agreement was signed by Ngapoi Ngawang Jigme, who advocated Tibetan acquiescence to China, and sealed in Beijing on 23 May 1951 and confirmed by the government in Tibet a few months later. The 17 points agreement was draconian for the Tibetan people and HHDL and other prominent Tibetans gave their consent out of pressure and sheer reluctance.

Signing the Seventeen Point Agreement at Zhongnanhai, 23 May 1951.

The 17 points had colonial intent which was depicted in the following points of the agreement:

His Holiness Dalai Lama taking the Tibetan cause to the world

In 1963 HH Dalai Lama presented a draft democratic constitution for Tibet and established the first exile Tibetan Parliament in Dharamsala.

He visited many countries like Italy, Switzerland, The Netherlands, Belgium, Ireland, Norway, Sweden, Denmark, the UK, West Germany & Austria to spread peace, hold talks on Buddhism, and garner support for the ultimate cause. 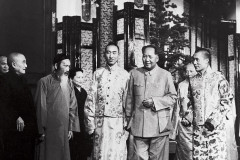 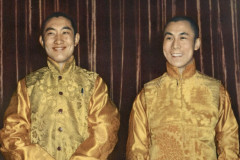 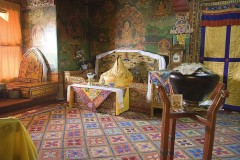 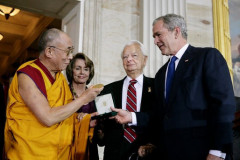 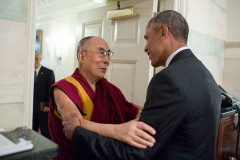 He was awarded the 1989 Nobel Prize for Peace in Oslo, Norway for “advocating peaceful solutions based upon tolerance and mutual respect in order to preserve the historical and cultural heritage of his people.”

China has never liked the HH Dalai Lama or anyone who even meets the messenger of peace. China was fumed at the announcement of the Nobel Peace Prize for HH Dalai Lama.

“It is interference in China’s internal affairs, It has hurt the Chinese people’s feelings. “Tibet’s affairs are wholly and purely China’s own business. The Dalai Lama is not simply a religious leader but also a political figure . . . who aims to divide the mother country and undermine political unity.”

Let alone the Nobel Prize, even the birthday wishes to HHDL on Twitter by World leaders in 2021, doesn’t go well with the Chinese regime.

In 2016, the United States and Canada co-sponsored a conference built around Nobel peace prize winners, on the sidelines of the UN Human Rights Council’s 31st session in Geneva. HH Dalai Lama was invited to the conference, which was chaired by UN Deputy High Commissioner for Human Rights Kate Gilmore. China voiced “strong dissatisfaction” and lodged solemn representations on the invitation to HHDL.

On 28th July 2021, more than 100 Nobel Prize winners accused China of ‘bullying’ after an effort to stop HH Dalai Lama and a pro-Taiwan independence chemist from speaking at the Nobel Prize Summit in April alongside the Nobel Foundation. On April 25, the embassy emailed the academy, demanding that the Dalai Lama and Taiwan chemist Lee not speak at the first-of-its-kind summit, which focused on climate change and sustainable development. However, His Holiness Dalai Lama came and delivered a peaceful message and ignored the distractors completely.

Chinese interest in the Shugden Sect

Inside the PRC, officials have long used Shugden propitiation to create divisions between Tibetans, often encouraging Tibetans to propitiate Shugden and offering financial inducements to do so. Shugden statues have been installed in monasteries in different parts of Tibet, often against the will of resident monks.

In some cases, even small monasteries connected to Shugden have had large amounts of funding from the government compared to much larger monasteries with a higher population of monks where Shugden is not propitiated. In 2008, thousands of yuan were allocated to a relatively small monastery in Amdo which propitiates Shugden. In contrast, the much larger monastery across the river in Takstang Lhamo had its school closed down and struggled for funding after monks participated in a peaceful demonstration, asserting their Tibetan identity.

The Dalai Lama has repudiated the propitiation of Shugden (also known as “Dolgyal”) for its sectarianism and the Tibetan community should stay alert from the activities of Shugden.

The curious case of Panchen Lama

The second most important figure in Tibetan Buddhism is Panchen Lama. Dalai Lama appoints the Panchen Lama and along with the council of high lamas, Panchen Lama in turn is in charge of seeking out the next Dalai Lama.

Gedhun Choekyi Nyima is the 11th Panchen Lama, as announced by His Holiness on 14th May 1995. Three days later on 17th May, the 6-year-old Panchen Lama was kidnapped by the Chinese government.

Gedhun Choekyi Nyima remains forcibly detained by the Chinese government, along with his family, in an undisclosed location since 1995

Six months after Gedhun Choekyi Nyima’s abduction, Chinese authorities announced that they had found the so-called “real” reincarnation of the Panchen Lama. They named Gyaltsen Norbu, a Tibetan boy and the son of two Communist Party members, the Panchen Lama. He is a member of the Chinese People’s Political Consultative Conference (CPPCC), a top advisory body to China’s government, and a senior figure in China’s state-run Buddhist Association.

On June 27, 2022, it was revealed that China is planning to relocate 17,000 Tibetan people. More than 130,000 people in more than 100 Tibet towns will be covered under the relocation plan in the following eight years under the guise of protection of the environment. This is not just a one-off case but the Tibetan community has been suppressed in the following brutal ways over the decades altogether.

Suppression of Tibetan Voices
Cultural and Religious Suppression
At least 157 other Tibetans have self-immolated since its occupation. Out of these, 141 did so within Tibet, while the remaining five were living in exile.

His Holiness Dalai Lama and the Tibetan Cause he stood for have been an inspiration for generations of Tibetans. He suggested the following scenarios for picking the next Dalai Lama in various speeches:

This is to avoid China from choosing a puppet Dalai Lama who will demolish the Tibetan way of life forever. The literal meaning of Dalai Lama is an ocean of wisdom and he is the only peaceful force who can change things around for the peaceful Tibetan community in exile for decades.

Hwa-Young compiled and curated this report