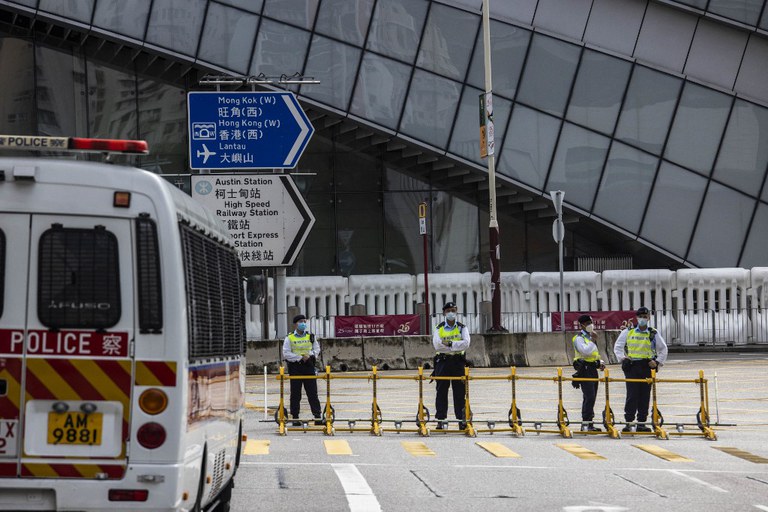 Chinese leader Xi Jinping arrived in Hong Kong on Thursday ahead of the 25th anniversary of Chinese Communist Party (CCP) rule, saying the city had “risen from the ashes” under a draconian national security law that left former opposition lawmakers under house arrest and journalists shut out of official events.

“Hong Kong has withstood challenge after challenge and won many a battle in recent years,” Xi told a crowd who turned out to greet him waving national flags and cheering, at the start of what observers said will be a heavily stage-managed trip subject to citywide security measures.

“Hong Kong has lived through turbulent times and risen again from the ashes to renewed vigor,” said Xi, who arrived by special train with first lady Peng Liyuan on Thursday.

As he spoke, former pro-democracy lawmaker Avery Ng tweeted that he had been placed under house arrest, likely for the duration of Xi’s visit, a form of treatment usually meted out by state security police to mainland Chinese dissidents during important political events.

“I am now in prison,” Ng wrote, adding “#ifyouknowyouknow” and a salty Cantonese epithet referring to somebody’s mother.

Ng took to social media to livestream about the anniversary instead, telling followers: “This is the first time this has happened … I’m sitting here at home with nothing to do … I can’t go out.”

Organizers of the city’s once-traditional July 1 protest march said it wouldn’t be going ahead, citing conversations with the national security police, who are spearheading a citywide crackdown on peaceful political opposition and public criticism of the authorities.

“Today, some volunteers and friends from the League of Social Democrats were spoken to by the national security police,” LSD chairwoman Chan Po-ying said in a statement earlier this week.

“We have assessed the situation, and there will be no demonstration on July 1,” Chan wrote on June 28. “We hope you can forgive us. We are in a difficult situation.”

Xi’s visit has also prompted a huge deployment of police at roadblocks near the 25th anniversary ceremony venue.

People and vehicles heading to the area around the Hong Kong Convention and Exhibition Centre will be stopped and checked, while footbridges and flyovers along the route of Xi’s motorcade will be closed, police told journalists.

The MTR subway station serving the venue was closed on Thursday, and will reopen after the ceremony on Friday, while a no-fly zone has been set up over the whole the city’s iconic Victoria Harbour, including for drones.

The Chinese leader, Hong Kong’s top officials and Xi’s entourage will remain in a bubble throughout, to minimize the risk of COVID-19 transmission. Xi, Peng and their entourage wore masks on arriving at the West Kowloon high-speed rail terminus.

Exiled former pro-democracy lawmaker Ted Hui said the reality of life in Hong Kong is very far from Xi’s claims, and that Beijing’s promise to allow Hong Kongers to run the city under “one country, two systems,” had come to nothing.

“Hong Kong is part of one country, and one system now,” Hui said, adding that many have yet to recover from the trauma of the crackdown on the 2019 protest movement, during which police violence sparked an international outcry.

“He says Hong Kong has been reborn from the ashes, but I only see anger in Hong Kong; anger and hatred for the [CCP] regime,” he said.

Hui said Xi’s visit is the first by a high-ranking Chinese leader during which protests and demonstrations have been banned.

“The relationship between the people and the government has been lost,” Hui said, adding that bans on protests were a symptom of the CCP’s cowardice in the face of criticism.

“This never used to happen in Hong Kong, only mainland China, but now it’s happening today in Hong Kong,” he said. “Does the lack of [public] dissent mean success, or the end of freedom? It’s a huge step backwards.”

Hui said those who greeted Xi were hired for the role in the manner of movie extras, and had nothing to do with regular Hong Kongers.

The Hong Kong Journalists’ Association (HKJA) said only a selected number of media outlets were invited to apply for accreditation to cover the anniversary celebrations.

“Similar handover official events in the past were open to media registration without requiring invitations,” the group said in a statement on its website, saying it was “deeply concerned” by the move.

“At least 10 well-known local online and overseas media outlets, news agencies as well as photo wires were not invited nor allowed to sign up for the events, making them unable to report from the handover’s official events,” the HKJA said in a June 16 statement.

The government replied on June 29, saying the decision was “a balance as far as possible between the needs of media work and security requirements,” government broadcaster RTHK reported. The government declined to comment on accreditations for individuals or organizations.

Meanwhile, London mayor Sadiq Khan said the crackdown on Hong Kong had been “devastating,” pledging to do everything in his power to help Hong Kongers fleeing the crackdown to start new lives in the British capital.

The Greater London Authority said it had set up the Migrant Londoners Hub to provide Hong Kongers arriving under the British National Overseas (BNO) passport and visa scheme.