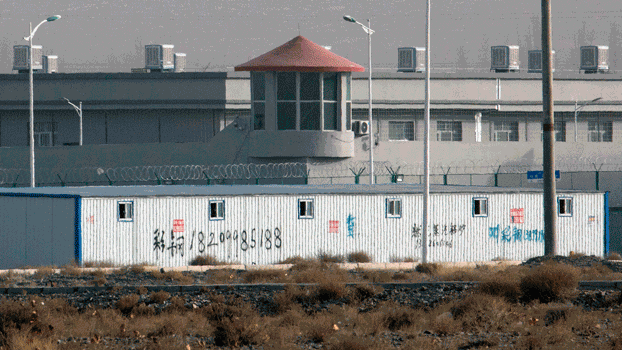 China’s efforts to turn its far-western Xinjiang into a manufacturing powerhouse could force more Uyghurs to work against their will and make it harder to track whether the country’s exports are made with forced labor, according to a new report from a Washington, DC-based research group.

“The Chinese government is undertaking a concerted drive to industrialize the Xinjiang Uyghur Autonomous Region (XUAR), which has led an increasing number of corporations to establish manufacturing operations there,” the report says. “This centrally-controlled industrial policy is a key tool in the government’s efforts to forcibly assimilate Uyghurs and other Turkic peoples through the institution of a coerced labor regime.”

The 25-page report, titled “Shifting Gears: The Rise of Industrial Transfer into the Xinjiang Uyghur Autonomous Region,” analyzes publicly available data and case studies to detail the political nature of China’s industrial transfer in the Xinjiang, the patterns through which it takes place, and the scale at which abuses in the region are embedded within Chinese and global supply chains.

“Forced labor is a major component of these human rights abuses,” the report says.

“It occurs not only within extrajudicial detention centers and through the placement of detainees in factories but also through the threat of detention to pressure Uyghurs into jobs across XUAR and throughout China.

The main mechanism for the central government’s industrialization drive in the XUAR is a program to pair Xinjiang counties and municipalities with wealthier provinces and municipalities on the east coast. The effort began 25 years ago and was expanded in 2010, the report says.

Government bureaus in the coastal provinces design and implement programs in their respective partner localities in the XUAR and help train Uyghur workers to build loyalty and obedience to the Chinese Communist Party, the report says.

The Yining zone is linked with the Jiangsu Nantong International Home Textile Industrial Park, the largest home textile distribution center in the world. As of March, about 20 Nantong-based textile companies had set up operations in the Yining Textile Industry Zone, the report says.

At least 1,000 people work in the Yining industrial park, including those sent via organized labor transfers from the surrounding county, according to the report. Several ethnic Kazakhs have testified that they were forced to work in a factory in the park after being released from a detention camp.

The industrial transfer policies have increasingly focused on four prefectures in the southern half of the XUAR with concentrated Uyghur populations and relative economic isolation that the Chinese government sees as problematic to its assimilation goals, says the report.

“The government sees the mass detention campaign and the establishment of a police state as prerequisites that allow Chinese manufacturing companies to feel secure enough to move into XUAR,” it says. “In turn, these manufacturers move Uyghurs from their farms and villages to factories and industrial parks where they can be monitored, indoctrinated and transformed into ‘modern’ industrial workers.”

Since 2017, Chinese authorities have ramped up their repression of Uyghurs and other Turkic minorities throughout the XUAR, detaining up to 1.8 million members of these groups in internment camps. The maltreatment also includes severe human rights abuses, torture and forced labor as well as the eradication of linguistic, cultural and religious traditions.

Credible reports by rights groups and the media documenting the widespread abuse and repression in the XUAR have led the United States and some parliaments in Western countries to declare that the Chinese government’s action amount to a genocide and crimes against humanity.

The Center for Advanced Defense Studies analyzed Chinese corporate data of tens of thousands of companies based in the XUAR, publicly available trade data, and government and media reporting to show how manufacturers there are linked to local governments and companies in eastern China.

The group said that subsidiaries and partner companies in China make it hard to track whether goods originated from Xinjiang and were produced by forced labor.

The U.S. enacted the Uyghur Forced Labor Prevention Act in December 2021 to strengthen an existing ban on the importation of goods made wholly or in part with forced labor into the country and to end the use of forced labor in the XUAR.

The act, which took effect on June 21, creates what is referred to as a “rebuttable presumption” that assumes goods made in Xinjiang are produced with forced labor and thus banned under the U.S. 1930 Tariff Act. The law requires U.S. companies that import goods from the region to prove that they have not been manufactured at any stage with Uyghur forced labor.

But the report said the structure of Chinese industrial policy, where goods are shipped and reshipped within its borders, will make enforcing forced labor laws difficult.

“[A]s long as the flow of goods produced in the region to exporters elsewhere in China is left unaddressed, tainted goods will continue to enter global supply chains,” the report warns. “Global stakeholders must improve due diligence and enforcement efforts to ensure they are not enabling forced labor and oppression in the Uyghur region.”

The report also disputed claims by Chinese leaders that their industrialization policies are good for the people of Xinjiang.

“[W]hile the Chinese government frames moving industry into the region as economically beneficial to the Uyghurs, you can see from the statistics of the leadership in these companies that it’s really a pattern of Han Chinese corporate officers and owners,” Nicole Morgert, a human right analyst who wrote the report, told RFA. “And then what you have is the Uyghurs working in the factories, so this is not really serving to empower Uyghurs.”

“[I]n many cases, we have evidence that they’re being forced to work in these factories,” she said. “When you look at the statistics on the corporate leadership, you see that it’s that people with Turkic names are highly underrepresented, particularly in companies that are above a certain level of value.”

Companies that import products from China must step up efforts to trace their supply chains to ensure they are not sourcing products from the XUAR or working with firms that support the repression of Uyghurs, says the report.

“Doing so will require a more comprehensive understanding of the ways state and private corporations are complicit in China’s ongoing campaign of human rights abuse against Uyghurs,” it says, adding that stakeholders can easily trace the ties by understanding the three pathways through which industry in the XUAR is connected to eastern China.