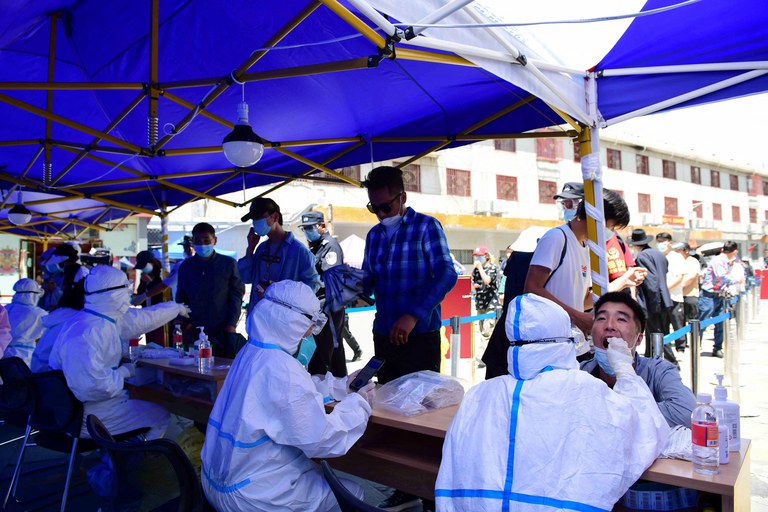 Authorities in Xinjiang are threatening those who flout quarantine laws with as many as three weeks of detention amid a new outbreak of COVID-19 in the region that has seen infections rise sharply since the start of the month, sources told RFA Uyghur.

The warning comes as the Tibet Autonomous Region (TAR) capital Lhasa entered a three-day state of de facto lockdown amid a growing number of COVID-19 cases in the city.

On Friday, authorities announced that they had documented 410 new asymptomatic COVID-19 infections in Xinjiang, bringing the total to 1,727, as the region continues to grapple with a new outbreak that has led to strict lockdowns.

An official in Qorghas (in Chinese, Huocheng) county’s Langar township, who oversees 10 families in Yengiavat village, told RFA that authorities have been conducting street patrols to ensure that nobody is leaving their homes during an ongoing lockdown in the area and informing residents that they would be detained for up to three weeks if they do.

“We are informing the residents that those who violate the system, that is, those who go out on the streets, will be punished and sent to 15-20 days of ‘re-education,’” said the official, who spoke on condition of anonymity, using a common euphemism for detention in the region.

The leader of the village Women’s Committee, who also declined to be named, told RFA that “medicine is being distributed to residents” by authorities, although she was unsure of what type.

“They are cream in color and are said to prevent disease,” she said.

A community official said that the new infections were thought to have been brought by Chinese tourists from Gansu province, and the first viral outbreak in Ghulja was found in Uchon Dungan village.

On Friday, sources in Xinjiang told RFA that lockdowns in the region had begun to severely impact the daily lives of residents, with farmers unable to attend to their fields and grocery store owners unable to sell perishables or keep them fresh.

Videos posted on social media from the region appeared to show rotten produce in markets that had been shuttered as a result of the lockdown, while residents said they were unable to obtain fresh vegetables while confined to their homes.

RFA spoke with the security director of Ghulja’s Mazar village, who said that only farmers with “urgent irrigation and harvesting needs” are allowed to leave their homes.

“The doors [on village homes] are sealed,” he said.

“Farmers with urgent needs are allowed to go out on a rotating basis. The farmers first need to get the approval of the village officials in order to go to the fields.”

The security director said those found to have violated the lockdown face at least 24 hours of detention.

A government official in Ghulja’s Samyuzi village told RFA that farmers are being allowed to work on their fields “under supervision,” adding that security cameras had been installed throughout the area to monitor whether anyone was leaving their home without permission.

“If they want to go out for farming needs, they will be accompanied by village officials to the fields. They can go on a rotating basis,” she said.

“We have installed security cameras on every household [to ensure no one ignores the lockdown],” she added.

In the TAR, where authorities say they had documented 20 symptomatic and 127 asymptomatic COVID-19 infections as of Friday, officials in the capital Lhasa ordered a citywide “disinfection” operation from Aug. 12-15, during which people are not to leave their homes.

Sources in the city said the order amounted to a de facto three-day lockdown, although officials have refrained from using the term.

Those who have been confirmed positive are being quarantined and public testing is underway, they said, although authorities have failed to ensure that residents maintain proper distancing when they do so.

“Since COVID cases are rising in Lhasa and a few other regions, people who stayed in hotels and lodges in these areas and may have contact with the infected are now quarantining for safety,” a source in Tibet told RFA Tibetan.

“People are being subjected to continuous testing, Potala Palace and other religious sites are shut down, schools have postponed their reopening, and people are stocking up on groceries and buying face masks.”

Meanwhile, the summer tourism season is in full swing in Lhasa – despite concerns that the outbreak there is linked to visitors to the region – with Chinese travelers arriving in droves by plane, train, and car from other parts of China, the source said.

“Tibetan religious pilgrims seeking to visit Lhasa from around the region are having difficulty obtaining travel permits, while Chinese tourists have no issue obtaining passes to visit Tibet,” he added.

Another source from Lhasa told RFA they are concerned that Tibet’s airports remain open, and could lead to the import of additional cases to the region.

“I understand that Lhasa will be under [a form of] lockdown from Aug. 12, but there has been no official notice from the government yet and Gonkar Airport remains open as usual,” the source said.

“During earlier COVID-19 surges, the Chinese government did not restrict tourists from entering Tibet, despite the concerns of Tibetans. Now, as we see a growing number of COVID-19 outbreaks and the situation remains uncertain, we are worried about what will happen in the next few days.”

According to local regulations, only travelers who are exiting Lhasa through Gonkar Airport must undergo testing for COVID-19 48 hours prior to their departure and provide evidence of a negative result before they can leave.

While the number of infections continues to rise in Lhasa, information about the outbreak has become increasingly difficult to obtain.

On Wednesday, a Chinese official in Lhasa sent out a notice warning people not to share any news related to COVID-19 in the area, and social media posts about the outbreak have since become rare.

On Friday, Chinese state media reported that five officials in Shigatse, Tibet’s second-largest city with a population of about 800,000 people, had been dismissed due to a botched response to the outbreak in the region.

The report said that the five officials were removed from their posts for “inadequate implementation of the novel coronavirus epidemic prevention and control work.”

The officials had served as cadres in counties that have been designated as either high-risk or medium-risk areas for the spread of COVID-19.

Written in English by Joshua Lipes.