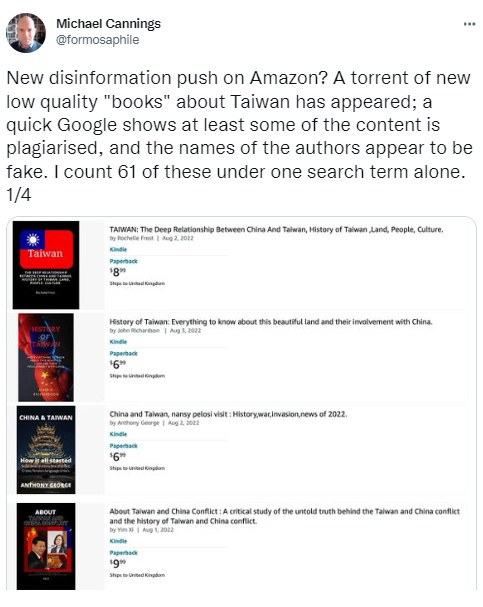 Amazon’s Kindle e-publishing platform has been flooded with poorly written books pushing Beijing’s line on Taiwan, according to a U.K.-based publisher.

A wave of e-books using the keywords “Nancy Pelosi” and “China and Taiwan” laying out China’s claim on the democratic island has appeared on Kindle since the start of the month, when U.S. House Speaker Nancy Pelosi first indicated she would visit Taiwan, sparking days of military exercises by China’s People’s Liberation Army (PLA).

“New disinformation push on Amazon?” U.K. independent publisher Michael Cannings tweeted, along with a screenshot of the Kindle titles.

“A torrent of new low quality ‘books’ about Taiwan has appeared; a quick Google shows at least some of the content is plagiarized, and the names of the authors appear to be fake. I count 61 of these under one search term alone,” Cannings wrote.

He later told RFA it was unclear whether the flood of new titles, many of which contain grammatical errors and consist of scraped content with changed wording to evade anti-plagiarism software, was a state-backed propaganda drive or simply the work of unethical people trying to cash in on global headlines.

“The possibilities to use this for disinformation are strong,” Cannings said. “I just can’t be sure whether in this case is really somebody trying to do that, or if it’s just unethical people trying to make money.”

“[But] it shows how it could be done by a state operation,” he added.

Cannings said the use of keywords and the flood of recent titles means that the books show up at the top of Amazon and Google searches for those keywords.

He said most of the titles were likely uploaded to Amazon’s Kindle Desktop Publishing platform, and, apart from automated plagiarism checks, weren’t subject to any editorial quality control.

“I think the danger for readers is that you don’t know what’s real and what’s not,” Cannings said. “I mean, some of these books don’t look great, but some of them are quite convincing, so a reader who’s not familiar with the subject might not know that this is not … properly researched.”

“The secondary danger is that these books then become cited by people further down the line… so then the disinformation gets into the wider ecosystem,” he said.

RFA was able to roughly replicate Cannings’ search results on Amazon, and found that the ebooks sell for around U.S.$10 or less.

Amazon told RFA in an emailed response that the company does have content guidelines for books self-published on the Kindle platform, and will investigate and remove books that don’t comply with them.

Daniel Kapellmann Zafra, senior technical analysis manager at the cybersecurity company Mandiant, said that whether or not the flood of books on Taiwan from Beijing’s point of view are actually backed by the Chinese Communist Party (CCP), the platform is vulnerable to disinformation campaigns.

“As long as there is a platform for sharing information, it can be leveraged to drive these types of narratives,” Zafra told RFA. “It’s basically a creative avenue that could … enable an actor to share information.”

“Narratives promoted by the campaign criticize the U.S. and its allies, attempt to reshape the international image of Xinjiang due to mounting international scrutiny, and express support for the reform of Hong Kong’s electoral system—a change which gave [China] more power over vetting local candidates,” the report, coauthored by Zafra, said.

Several of the sites published articles critical of Pelosi on Aug. 1, in response to reports ahead of her Aug. 2-3 visit to Taiwan, it said.

“The articles assert that Pelosi should ‘stay away from Taiwan’ and highlight perceived tarnished relations between the U.S. and Taiwan.”

An article published on several sites, including one purporting to be a Taiwanese news outlet, claimed that former U.S. government official Mike Pompeo’s March 2022 visit to Taiwan was motivated by money and his alleged desire to run for U.S. president in 2024, according to the report.

A separate information operation, DRAGONBRIDGE, publishes comments, videos and photos across thousands of social media and forum accounts on authentic platforms, according to the report.

Maj. Gen. Chen Yu-lin, deputy director of the Political and War Bureau of Taiwan’s Ministry of National Defense told journalists on Aug. 8 that China had begun a wave of “cognitive operations” even before the military exercises were announced.

Chen said the hybrid warfare campaign sought to create an atmosphere suggesting China might be invading Taiwan, to attack the public image of the government, and to disrupt civilian and military morale.

Hybrid warfare denotes a combination of conventional military action on the ground and hacks or disinformation campaigns designed to attack public morale and sow confusion.

National Taiwan University was hacked, with the words “there is only one China in this world” appearing on its official website.

Meanwhile, the National Palace Museum issued a statement denying online rumors that the government was preparing to send tens of thousands of rare artifacts overseas for safekeeping.

Digital signage at a railway station in the southern port city of Kaohsiung and at a government office in Nantou county also displayed a message calling Pelosi “an old witch.”

The official website of Tsai’s Presidential Office was taken down for around 20 minutes by a cyberattack, after which full service was restored, while mainland Chinese website Baidu joined in the cognitive warfare, releasing maps of Taiwan for the first time, which went viral after social media users noticed that many streets in Taiwan’s cities are named for cities in mainland China.

Chinese officials and pro-CCP commentators have launched a global media offensive around Pelosi’s Taiwan visit, claiming that the island, which has never been ruled by the CCP nor formed part of the 73-year-old People’s Republic of China, is an “inseparable” part of Chinese territory.

CCP leader Xi Jinping has repeatedly said that Taiwan must be “unified” with China, and refused to rule out the use of military force to annex the island.

But Taiwan president Tsai Ing-wen, who was re-elected in a 2020 landslide after vowing to stand up to China on the issue, has said that Taiwan’s 23 million population have no wish to give up their sovereignty, a view that is borne out by repeated opinion polls.