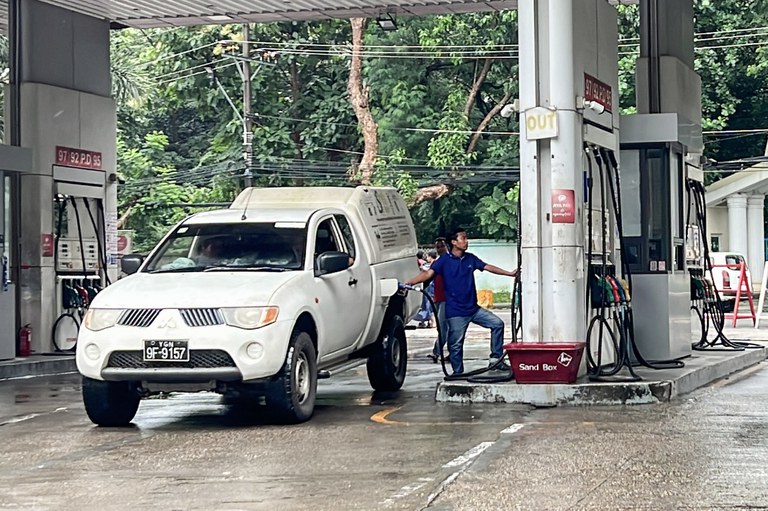 A fuel shortage has forced gas stations to close in major cities in Myanmar and sent prices soaring to their second highest level since the coup, prompting criticism that the junta’s restrictions on imports and manipulation of the exchange rate are to blame.

On Friday, the Fuel Import, Storage and Distribution Supervision Committee under the junta’s Ministry of Energy announced that fuel shortages had driven prices up by 600 kyats (U.S. $0.30), or nearly 40% in the five days since Aug. 7.

The shortage driving up prices has led gas stations in major cities in most states and regions, including Myanmar’s largest cities Yangon and Mandalay, to close as they run out of fuel supplies, while others have been forced to limit their sales.

He called the fuel situation “the worst I’ve ever seen in my life.”

Other sources told RFA that crucial services provided by charity organizations to make up for the junta’s shortfall in administration were being curtailed as a result of the shortage.

A spokesman for a Yangon-based charity group that provides assistance to those in need of medical care told RFA that he had been forced to turn away requests for lack of fuel.

“In our work, it’s hard to refuse when you get a call from a patient,” he said. “I can’t help wondering if a person had called because they were desperate and really needed us.”

The spokesman said that even when the price of fuel is affordable, organizations like his don’t have enough money to buy more than what can fit in their gas tanks.

“When the prices rise, we have much bigger problems to deal with,” he said.

Despite domestic fuel shortages and skyrocketing prices, junta chief Snr. Gen Min Aung Hlaing on Aug. 8 announced to a governmental work coordination meeting that the regime is seeking to reduce expenditures by cutting down on its U.S. $1.3 billion annual imports of oil and petroleum products.

A fuel distributor, who declined to be named for security reasons, said the fuel shortage and rise in prices is the result of the junta’s restrictions on foreign imports.

“The dollar has become so scarce that procuring gasoline has become difficult. When a certain amount becomes available, we are forced to buy it as a group and later divide it among ourselves,” he said.

“In the past, we made the purchases ourselves, individually, not as a group. … We can’t do that anymore. Instead, we have to get our supply through the [junta]. It’s going to get worse if things continue this way.”

Economists told RFA that the fuel shortage is also the result of controls and fixed U.S. dollar exchange rates set by the junta.

“Since the official rate has risen, the price of imports will surely go up. And as fuel oil is one of the imports, other prices of imports will also go up,” said one economist, speaking on condition of anonymity.

“I believe that’s why they changed the exchange rate, so that fuel importers would be able to get supplies. Otherwise it’d be too difficult because the price is too different.”

Economists also noted that the rising cost of fuel is increasing prices across the board for other basic goods as transportation becomes more expensive.

Shortages have caused fuel prices to rise steadily since the coup.