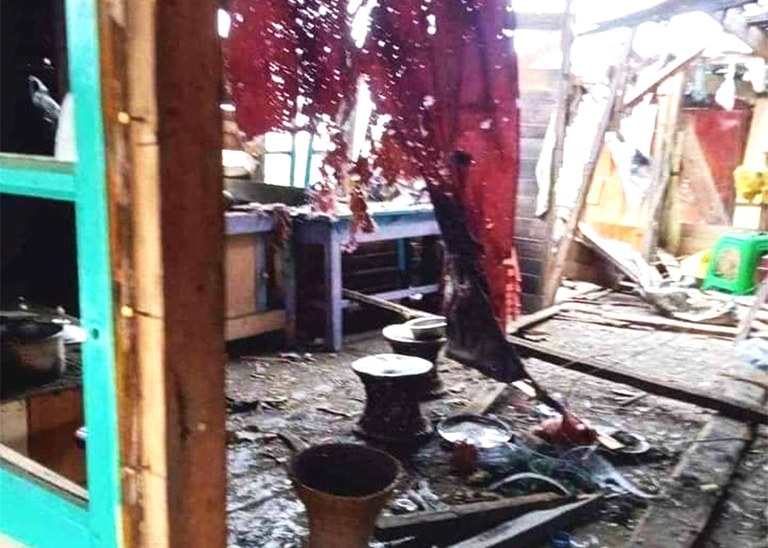 A 55-year-old woman was killed and her son was injured when a shell hit a village during fighting between junta forces and local militia in Hakha city, the capital of Myanmar’s Chin State.

A local, who did not want to be named for safety reasons, told RFA an artillery shell landed on a house in Hniarlawn village, 11 kilometers (7 miles) from Hakha city.

“She was hit by the artillery shell and died on the spot while she was cooking in the kitchen,” the resident said. “One of her sons was wounded in the hand. Her body has been left there for now because everyone has fled to the forest.”

This is not the first time fighting has affected Hniarlawn village, which houses more than 600 people in over 100 homes.

Last month, 22-year-old Salai Manliansan was shot dead by junta troops there, according to residents.

Battles break out daily in Chin state, causing many locals to flee their homes and set up makeshift camps in the jungle.

UNICEF says the state, in the west of the country, has the highest poverty rate of all Myanmar’s regions but aid has been slow to arrive.

The U.N. Office for the Coordination of Humanitarian Affairs said last week 866,000 people had become refugees in Myanmar in the 18 months since the Feb. 2021 coup. There are now more than 1.2 million internally displaced persons across the country, or more than 2% of the total population.