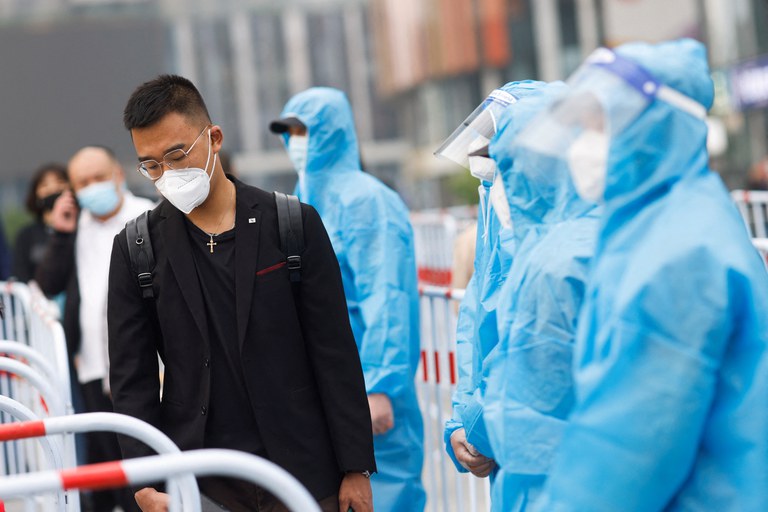 The creator of a viral video about the Shanghai lockdown has said he has deleted it, and that rumors of his detention were untrue, as shoppers poured into stores in Beijing amid rising COVID-19 cases.

The montage-style video “April Voices” puts together audio clips, video and still photos of the past few weeks of life under the ruling Chinese Communist Party (CCP)’s zero-COVID policy.

“Shanghai is not under lockdown, and doesn’t need to be,” an official voice is heard saying at the start, followed by images of deserted streets and soundbites about overcrowded hospitals and ambulances that never come and deleted complaints posted to social media.

It continues with audio of crying babies, complaints about undelivered groceries, rotting vegetables by the roadside, the scarcity of basic foodstuffs and water, wails and shouts from the windows of high-rise apartment buildings demanding officials hand out basic supplies.

In the middle is a tearful clip of an exhausted neighborhood committee official who laments the lack of sensible policies or even explanations about why some 25 million people have been confined to their homes since late March and forced to submit to round after round of mass COVID-19 testing, before either being sent to overcrowded and under-resourced quarantine facilities or walled up in their own buildings and apartments, often with welded metal barriers.

“Are they going to kill it? Oh my God!” says one woman, apparently witnessing officials dispatching a pet whose owners have been taken away after testing positive.

“Some nice police officers brought us food, because we hadn’t eaten in several foods,” a man’s voice says, while another man talks about being unable to get admitted for urgent treatment in hospital owing to stringent testing requirements.

“People might not be dying of the virus, but they’re starving to death,” says a man’s voice. “They haven’t even put up beds so we’re sleeping on the floor,” a woman’s voice says.

“Are you locking the door?” shouts a woman. “What if there’s a fire?” a man demands to know.

“I’m sorry to disturb you ma’am but my kid has a fever!” yells another woman.

The blogger and video-maker Strawberry Fields, who described themselves as “Shanghai born and bred,” said via QQ.com that the video had now been deleted.

“There were online comments today about the maker of the video being taken away, and a lot of people have been asking what happened, so I need to clarify things,” the blogger wrote. “My family and I are all fine, at home as usual, and no officials have contacted me.”

“I felt that perhaps the meaning given to the video had been extended by its audience, and it spread far further and faster than is normal, so I deleted it myself at around 3 p.m. today,” they wrote. “I don’t want any more misunderstandings.”

The video’s disappearance came as residents of Pudong and Huangpu protested at officials who had come to seal them into their buildings with steel barriers and fences, which are springing up across the city, sometimes cutting off entire districts from each other by blocking main thoroughfares.

Meanwhile, shoppers flooded stores and supermarkets in Beijing amid rising COVID-19 cases, as the authorities sealed off a number of residential districts in Chaoyang district.

Store shelves were rapidly emptying of basic foodstuffs, fresh fruit and vegetables, sanitary supplies and Coca-Cola, as people scrambled to lay in stores for prolonged restrictions on their freedom of movement.

Pork, steak and burgers, onion, ginger and coriander were among the first to go, as online posts suggested buying a second refrigerator or freezer to store food in for the long haul.

Chaoyang district has launched a program of district-wide mass COVID-19 testing, to be repeated three times over the next week, a local resident surnamed Sun told RFA.

“There was an infection source traced to Chuiyangliu in Chaoyang district,” he said.

“All staff will undergo PCR testing today, and again on Wednesday and Friday, three times in all,” Sun said. “A lot of people are now buying food.”

“Residents rushed to buy food at various supermarkets in Beijing yesterday, all the food is gone, and the shelves are empty,” the resident said.

Current affairs commentator Li Ang said the authorities have shown in their handling of the Shanghai lockdown that they are less concerned about COVID-19 than they are about potential social unrest.

“The main point is to strengthen their control of society in an all-round way, to prevent trouble, any unexpected incidents from happening,” Li said. “The first thing they consider is the stability of the regime, and the second is the security of the regime.”

“That is the top priority, and nothing else is seen as a problem.”

Lockdowns were imposed on 14 areas in Chaoyang at the time of writing, with another 14 areas subject to less stringent restrictions on people’s movements.