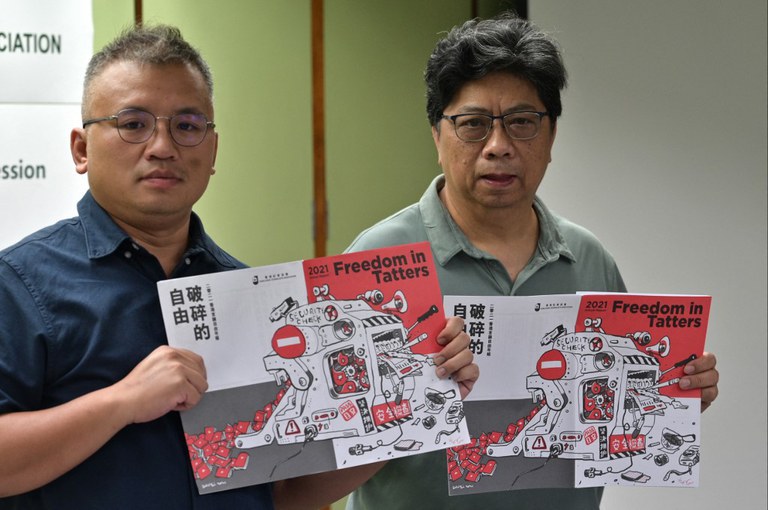 A newspaper backed by the ruling Chinese Communist Party (CCP) has called on a prominent journalists’ association in Hong Kong to disband, as the city’s foreign correspondents’ club said it had axed a prestigious award for journalists reporting on human rights issues.

Writing in the Wen Wei Po newspaper, pro-Beijing lawmaker Edward Leung called the Hong Kong Journalists’ Association (HKJA) “a suspected anti-China organization that disrupts Hong Kong,” saying it was a political organization in the guise of a press organization.

“The HKJA is … fighting against the reality of Chinese rule in Hong Kong,” Leung wrote, saying it had “incited fake journalists to spread rumors and incite violence.”

“Just like the Professional Teachers’ Union and the Confederation of Trade Unions and other anti-China, trouble-making organizations in Hong Kong, they must be held responsible for the damage they have caused,” Leung wrote.

Meanwhile, the pro-CCP Ta Kung Pao published an opinion article titled “dissolution is the only solution for the HKJA.”
“If the HKJA thinks that it can continue to destroy Hong Kong with the support of foreign forces, then it’s on a fool’s errand,” the paper said.

The association has previously been a vocal critic of police restrictions on journalists, particularly during the 2019 protest movement, which culminated in the police force refusing to tolerate the presence of anyone it decided was a “fake journalist.”

Leung said city officials have demanded the HKJA “provide relevant information on activities not conforming to its articles of association,” but the organization hadn’t immediately complied, suggesting it had “ghosts” it was avoiding.

HKJA president Ronson Chan told RFA that the organization hasn’t yet decided whether or not to dissolve, as many trade unions and civil organizations have since the CCP imposed a draconian national security law on Hong Kong from July 1, 2020, saying that was a decision for its members.

“I am disappointed in that article,” Chan said. “The issues [around the articles of association] have been clarified, and I have said this many times, but their argument is still the same.”

Journalists laid off after the folding of a number of outspoken news organizations since the law took effect have told RFA they face an uncertain future amid dwindling freedom of expression in Hong Kong.

“National security education” — which is being tailored to all age-groups from kindergarten to university — is also mandatory under the law, while student unions and other civil society groups have disbanded, with some of their leaders arrested in recent months.

An online meeting of the HKJA on Saturday did discuss the possibility of disbanding, and whether or not it should change its articles of association, Chan said, adding that the HKJA will continue to exist “for the forseeable future.”

The organization sent an email out to members on April 22 informing them that its executive committee are considering the organization’s position, and calling for comments in a consultation exercise.

Any motion to disband must win the support of at least five-sixths of voting members in a secret ballot.

“Over the last two years, journalists in Hong Kong have been operating under new ‘red lines’ on what is and is not permissible, but there remain significant areas of uncertainty and we do not wish unintentionally to violate the law,” FCC president Keith Richburg said in a letter to members posted to the FCC website.

“We explored a variety of other options, but could not find a feasible way forward. It is particularly painful coming less than two weeks before May 3, World Press Freedom Day, when we normally announce the HRPA winners and celebrate their journalism,” he said.

Former Hong Kong Baptist University journalism professor To Yiu-ming said political affiliation is now the most important thing when media organizations in Hong Kong hire journalists, especially the most senior ones, not professionalism.

He cited the recent hiring of pro-CCP media figures to senior editorial role, including that of Chan Tit Piu as director of NowTV news.

“The fact that these people can get directly hired to positions like that has to do with political considerations,” To told RFA. “It’s a bit problematic.”

“Why don’t they emphasize professionalism [when hiring]?”