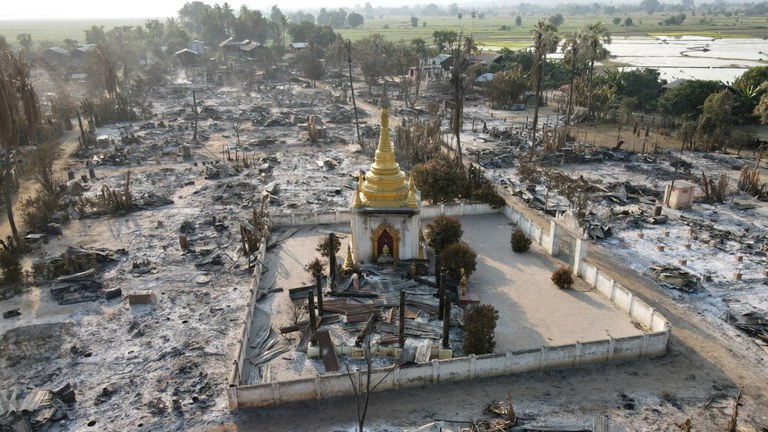 Malaysia’s top diplomat has revealed he’s had contact with the Burmese shadow government, the first ASEAN country to acknowledge such an interaction, as activists lambasted the bloc on the anniversary of its failed five-point plan to restore democracy in Myanmar.

Foreign Minister Saifuddin Abdullah was responding Sunday to an open letter from a Southeast Asian parliamentarians’ group to the leaders of the Association of Southeast Asian Nations. In it, they urged the bloc to “immediately and publicly meet with the NUG” – Myanmar’s parallel, civilian National Unity Government.

“I have informally met [through virtual conference] the NUG Myanmar foreign minister and the NUCC chairman before the last ASEAN Foreign Ministers’ Retreat. Let’s meet and discuss,” Saifuddin said via Twitter, referring to a ministerial retreat that took place in a hybrid format in mid-February after being postponed from an earlier scheduled date amid reports of differences among member-states.

In the tweet, Saifuddin tagged the ASEAN Parliamentarians for Human Rights (APHR), the group that sent the open letter on Sunday, the anniversary of the day when Southeast Asian leaders and the Burmese junta chief, agreed during an emergency summit to a so-called Five-Point Consensus for action on post-coup Myanmar.

Last October, Malaysia’s outspoken foreign minister had said he would open talks with the NUG if the Burmese junta kept stonewalling in cooperating with ASEAN’s conflict resolution efforts.

RFA contacted the foreign ministry of Cambodia, this year’s ASEAN chair, for comment but did not immediately hear back.

“They have failed to implement, during the past year, the basic point of the ASEAN Common Agreements – to end the violence. And then, they failed to comply with the second point – systematic distribution of humanitarian aid,” he told RFA.

ASEAN has not succeeded in implementing any of these points, said Joshua Kurlantzick, senior fellow for Southeast Asia at the Council on Foreign Relations, a Washington think-tank.

“I think there is no doubt every part of [the consensus] has failed, and with Cambodia as the chair and the junta increasingly backed by China, there is no way the consensus will succeed, or that ASEAN will do anything at all serious about Myanmar,” Kurlantzick told BenarNews.

“Suspend Myanmar from ASEAN until a return to democratic rule. … But ASEAN won’t do that.”

He was referring to Beijing’s support for Naypyidaw at international forums, including at the United Nations, since Min Aung Hlaing toppled the elected National League for Democracy (NLD) government on Feb. 1, 2021.

Under ASEAN’s long-standing policy that its 10 members take all decisions collectively through consensus, if one member-state opposes a proposed move, it is shelved. And not every ASEAN member is on board with stricter action against Myanmar other than barring junta representatives from attending top ASEAN meetings, analysts have noted.

A “five-point failure” is what the Special Advisory Council for Myanmar (SAC-M), a group of independent international experts, calls ASEAN’s consensus.

“The junta has not held to a single point of the five-point consensus. The agreement has failed and a change of course from ASEAN is needed,” SAC-M member Marzuki Darusman said in a statement issued Friday.

In fact, since joining the consensus, Min Aung Hlaing has escalated the military’s attack on the people of Myanmar, and continued to target and detain political opponents, SAC-M said. Nearly 1,800 people, mostly pro-democracy protesters, have been killed by Burmese security forces, since the coup.