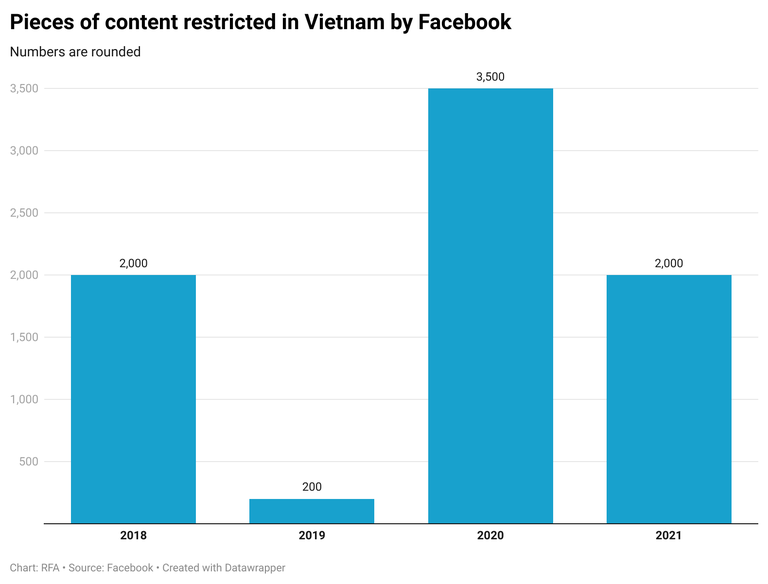 Vietnam’s government has hit out at Facebook, accusing owners Meta Platforms of ignoring calls for it to block posts containing content considered “malicious” in the country.

The government considers any comments that criticize the ruling communist party or the government as “malicious” along with content that incites violence.

There are around 70 million Facebook users in Vietnam. The platform was singled out by Luu Dinh Phuc, Director of the Department of Radio, Television and Electronic Information at the Ministry of Information and Communications. Speaking at a workshop last week on activities in the field of electronic information in the first six months of the year Phuc said “Some foreign enterprises providing cross-border services to Vietnam still find ways to avoid preventing malicious information in Vietnam, typically its Facebook.”

VietNamNet’s ictnews website said on March 29 that foreign social networking platforms including Facebook, YouTube, and TikTok removed thousands of posts with allegedly malicious content that slandered the Vietnamese Party and State in the first three months of this year. The figures, supplied by Vietnamese authorities, showed that the social media companies took down all but 10% of the posts objected to by the government.

The figures also showed that Alphabet’s Google removed 2,679 videos identified as breaking the law on its YouTube platform with a removal/blocking rate of 93%. ByteDance’s short form video site TikTok removed or blocked 71 videos, or 87% of the total. Facebook removed 5% fewer posts than in the same period last year and Google’s removal rate dropped by 3%.

Nguyen Ngoc Truong, the former president of the Center for Strategic Studies and International Relations Development (CSSD), told RFA he didn’t believe government censors were being too heavy handed.

“I find social media in Vietnam very good, compared with China and Russia. Here there is freedom and comfortable access. There are no restrictions with the exception of a few sensitive areas,” he said.

When RFA asked Nguyen for his views on the blocking of some foreign news sites in Vietnam he said it made sense to censor sensitive material but in general “there are things that are not worth interfering with,” adding that sometimes authorities can be too sensitive when dealing with foreign news sources.

Hanoi-based teacher Tran Thi Thao, who often criticizes the regime and government officials on Facebook, told RFA that in May one of her articles was restricted by the platform due to what it called a “legal requirement.” She said on another occasion her post was moved to a lower position on the news feed for nearly a month. Thao said she believed that Facebook was still complying with requests to block news considered critical of the communist party and the government.

The seventh largest Facebook user base in the world

Figures from the World Population Review website show that Vietnam had the seventh highest number of Facebook users in the world in 2020 and 2021, which may explain why Facebook responds favorably to government censorship requests.

Last October the Washington Post reported that Facebook co-founder and Meta Platforms CEO Mark Zuckerberg personally signed a commitment with the Vietnamese Government to limit posts on the social network that are considered “anti-state,” because he didn’t want to be shut out of one of the most important social media markets in Asia.

Not all Vietnamese Facebook users are critical of the site’s policies. Hanoi-based civil activist Do The Dang, who writes and share articles related to many issues in Vietnam, said he had been using Facebook for more than 10 years and had never been suspended.

RFA emailed Meta’s California headquarters to ask for its response to the Vietnamese government’s criticism but did not receive a reply.

The company’s Transparency Center page says “Meta responds to government requests for data in accordance with applicable law and our terms of service. Each and every request we receive is carefully reviewed for legal sufficiency and we may reject or require greater specificity on requests that appear overly broad or vague.”

In its section on Vietnam the Transparency Center said it had received six requests from the Vietnamese government to delete Facebook posts in the second half of last year and removed two of them. In the first half of the year it received three requests and removed one post.