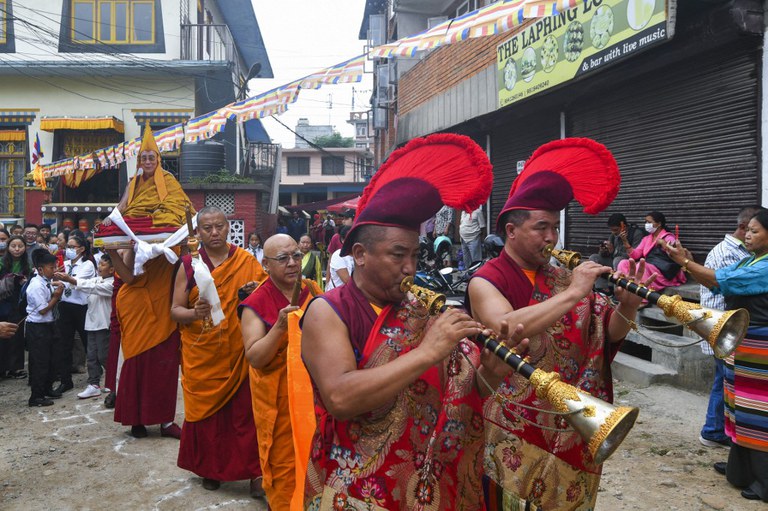 Tibetans bucked tight Chinese security and online surveillance to honor the 87th birthday Wednesday of exiled spiritual leader the Dalai Lama with incense and picnics, sources in the region said.

Previous years have seen arrests in the weeks around the July 6 birthday and Lhasa and other population centers across Tibet and Tibetan regions of Chinese provinces faced beefed up security this year.

“Despite Chinese authorities’ clampdown on celebrations of His Holiness the Dalai Lama’s 87th birthday, Tibetans inside Tibet are finding ways to observe the anniversary, either covertly or openly” said a Tibetan in the region who spoke on condition of anonymity for security reasons.

“On July 6th Many Tibetans are making Sangso incense smoke offerings on the top of hills in their respective areas, and Tibetans are also commemorating the day by holding picnics at other places,” said the source.

Despite the intensifying security this year, “there are Tibetans inside Tibet, who write essays and articles in praise of His Holiness the Dalai Lama on the occasion,” the source said. The articles “are widely read and shared on social media,” he added.

Chinese authorities in the Himalayan region made everyone attend meetings to warn Tibetans not to share any kinds of photos and telling them that their cellphones will be checked for banned content, another source said.

“In many places, new checkpoints are erected that check all travelers and police units are established to spy on the activities of the family,” the second source said.

“This year around in recent days, the visitors and pilgrimage to Potala Palace and Tsulangkhang Temple in Lhasa are heavily restricted and limited.  Only a certain number of visitors are allowed each day to avoid large public gatherings,” said a source in Lhas, the regional capital.

Last year RFA reported the arrests of 20-30 Tibetans around the time of the Dalai Lama’s 86th birthday. But there has been no word of detentions or arrests this year.


In Nepal, which borders Tibet, the government permitted a two-hour celebration of the Dalai Lama’s 87th birthday at the Jawalakhel Tibetan Settlement, a 60-year-old facility near the capital Kathmandu that is home to more than 1,000 Tibetans.

“It took more than two hours to complete the celebrations with the presence of many Western embassy dignitaries,” said a local Tibetan who attended the celebration.

Local media reported that diplomats from the embassies of France, the EU, Japan, and the United States were among the foreign guests at the settlement center.

“This year the Nepali government granted permission and a large number of Tibetans showed up to celebrate the occasion,” the local source said.

“Nepali police were deployed at the venues, but they are just keeping watch and does not interrupt the celebrations, which included processions of carrying the Dalai Lama’s portrait, official speeches of the Central Tibetan Administration, cultural performances and so on,” added the Nepal source.

Nepal had in previous years banned any such open display of devotion to the Dalai Lama, a stance seen as deferring to its powerful neighbor China, which reviles the popular leader as a separatist.

The Dalai Lama fled Tibet into exile in India in the midst of a failed 1959 Tibetan national uprising against rule by China, which marched into the formerly independent Himalayan country in 1950.

Displays by Tibetans of the Dalai Lama’s photo, public celebrations of his birthday, and the sharing of his teachings on mobile phones or other social media are often harshly punished.

Chinese authorities maintain a tight grip on Tibet and on Tibetan-populated regions of western China, restricting Tibetans’ political activities and peaceful expression of cultural and religious identity, and subjecting Tibetans to imprisonment, torture, and extrajudicial killings.

In a statement honoring the Dalai Lama’s birthday, U.S. Secretary of State Antony Blinken praised his “ongoing commitment to non-violence to resolve the grievances of the Tibetan community” and his “dedication and service to humanity.”

Blinken said “the United States will continue to support His Holiness’s and the Tibetan community’s efforts to preserve Tibet’s distinct linguistic, religious, and cultural traditions, including the ability to freely choose their religious leaders.”

Translated by Dorjee Damdul. Written in English by Paul Eckert.