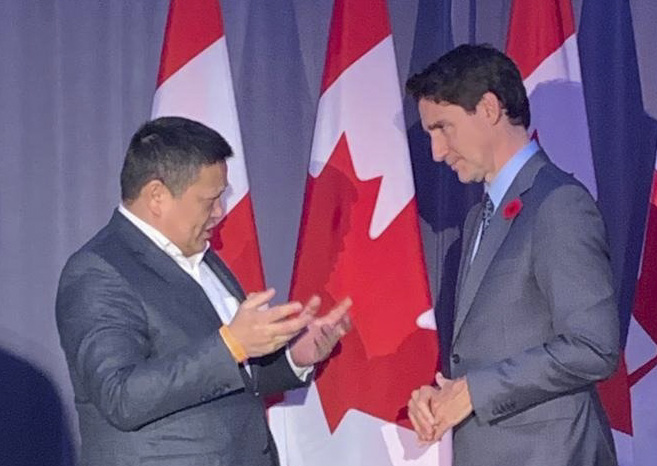 Uyghur community leaders in Canada asked Prime Minister Justin Trudeau why his administration has not followed Canada’s parliament in recognizing the situation in China’s Xinjiang Uyghur Autonomous Region as genocide.

Trudeau met with about 10 community leaders on Monday in Montreal to discuss a wide range of topics related to Xinjiang, including the possibility of banning imports of products produced by forced labor.

“He said he was aware of it and looking into it. He said Canada was considering banning forced labor products coming into Canada,” Keyum Masimov, project leader of the Ottawa-based Uyghur Rights Advocacy Project, or URAP, told Radio Free Asia’s Uyghur Service on Tuesday.

The meeting’s organizer was lawmaker Sameer Zuberi, who in June introduced a motion in parliament to help Uyghurs fleeing “ongoing genocide” in China by expediting entry for “10,000 Uyghurs and other Turkic Muslims in need of protection” starting in 2024.

Parliament voted 258-0 in support of the measure last month, echoing the February 2021 motion to recognize the situation in Xinjiang as genocide, which passed 266-0.

“We were able to convey our concerns to him that we were puzzled by his administration’s reluctance to recognize the Uyghur genocide as every Uyghur Canadian has at least one family member, neighbor, or friend locked up in the concentration camps,” Masimov said.

Monday’s meeting between the community leaders and Trudeau was a message to Uyghurs everywhere that Canada’s government is paying close attention to their plight, Mehmet Tohti, the executive director of URAP, told Ij-Reportika while on the sidelines of a conference at the European Parliament.

“It’s a strong signal to China,” Tohti said. “This was a great opportunity to convey to the prime minister, who is running Canada, about the concrete concerns of Uyghurs.”

Those concerns included the case of Huseyincan Celil, a Uyghur Canadian serving a life sentence in China on terrorism charges, Tohti said. Authorities in Uzbekistan arrested Celil during a visit there in 2006 and extradited him to China, where he was tried as a Chinese national despite having acquired Canadian citizenship, an act that by Chinese law revokes his Chinese citizenship.

Tohti acknowledged that Canada’s Parliament has four pieces of legislation pending that are either directly or indirectly related to Uyghur forced labor, and that the Canadian government’s China policy framework, which will be announced later this month, includes banning forced labor products.

“Most importantly, Canada is fully aware of the Uyghur situation by taking certain steps to resettle 10,000 Uyghur refugees and assist victims of genocide,” Tohti said. “Our hope is that Canada takes bigger and faster steps.”