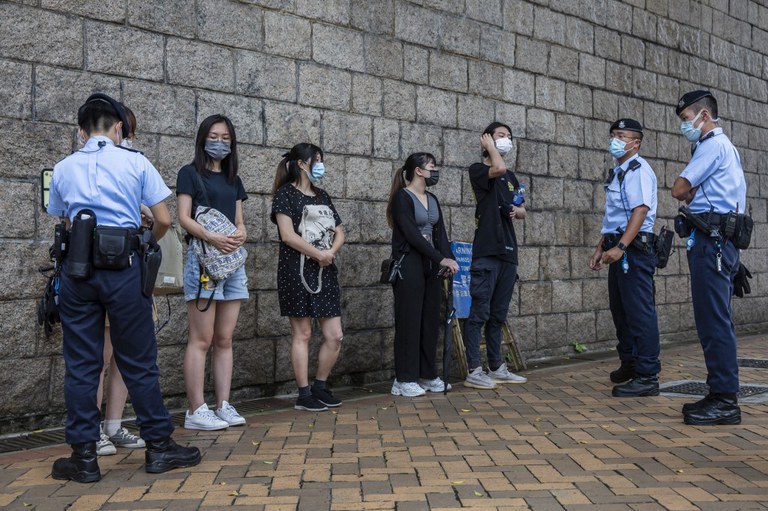 A prominent Chinese democracy activist in exile has been indicted on spying charges in the United States alongside four intelligence officers, suggesting successful infiltration of exile groups by China’s state security police.

Wang Shujun, 73, a U.S. citizen resident of Queens, New York, was accused in an indictment of taking part in “an espionage and transnational repression scheme in the U.S. and abroad,” according to a statement on the Department of Justice’s official website.

Wang was indicted along with People’s Republic of China (PRC) intelligence officers He Feng, Ji Jie, Li Ming and Lu Keqing and arrested on March 16, while his co-defendants remain at large, the statement said.

“We will not tolerate efforts by the PRC or any authoritarian government to export repressive measures to our country,” Assistant Attorney General Matthew G. Olsen said.

Olsen said the accused had sought to “suppress dissenting voices within the United States and to prevent our residents from exercising their lawful rights.”

Wang, who had been known as an elder of the pro-democracy movement in exile, was a Chinese Communist Party (CCP) mole in that movement, “spying on and reporting sensitive information on prominent pro-democracy activists and organizations to his co-defendants, who are members of the Chinese government’s Ministry of State Security,” U.S. Attorney Breon Peace said.

He said the operation had been threatening the safety and freedom of PRC nationals in the U.S., targeting them for their pro-democracy beliefs.

According to the indictment, Wang was turned in 2011, after which he started covertly collecting information about prominent activists, including advocates for independence for Taiwan, a Uyghur state of East Turkestan, and Tibet, and giving it to Beijing.

“The PRC is targeting people in the United States and around the world,” Kohler said, adding that the FBI would continue to fight “transnational repression.”

Wang had communicated with He, Ji, Li and Lu using encrypted messaging apps and emails, as well as during face-to-face meetings in the PRC.

Wang recorded details of his conversations with activists in around 163 draft email entries in accounts that were also being accessed by the state security police, it said.

Wang is also accused of transferring telephone numbers and contact information belonging to Chinese dissidents to his handlers, as well as making materially false statements to federal law enforcement about such contacts, court documents said.

All defendants are presumed innocent until proven guilty beyond a reasonable doubt in a court of law, it said.

‘An attack by the enemy within’

“Wang Shujun was very active in those circles. I had no contact with him, but I know him,” Zeng told RFA. “Many of us do. Nobody had fears or suspicions … I wasn’t wary of him.”

“This was an attack by the enemy within,” he said. “He was at the heart of this circle, and could get intelligence first hand, which is why the CCP turned him.”

Among the conversations Wang may have reported to state security police was one with former Hong Kong Democratic Party chairman Albert Ho, who also led the now-disbanded Hong Kong Alliance in Support of Democratic Patriotic Movements of China, as well as the names and contact details for several Hong Kong activists who have since been arrested for their involvement in the 2019 protest movement.

The 32-year-old Alliance now stands accused of acting as the agent of a foreign power, with leaders Chow Hang-tung, Albert Ho, and Lee Cheuk-yan arrested on suspicion of “incitement to subvert state power,” and the group’s assets frozen.

“There are at least three kinds of infiltration practiced by the CCP,” Sang said. “One is red, in the case of the Democratic Alliance for the Betterment and Progress of Hong Kong (DAB) and the Federation of Trade Unions.”

“Another is gray, and uses a variety of methods and hiding places, so people think it’s harmless: that could take the form of a person, an ordinary businessman,” he said.

“These three systems are all in operation at the same time,” Sang said.