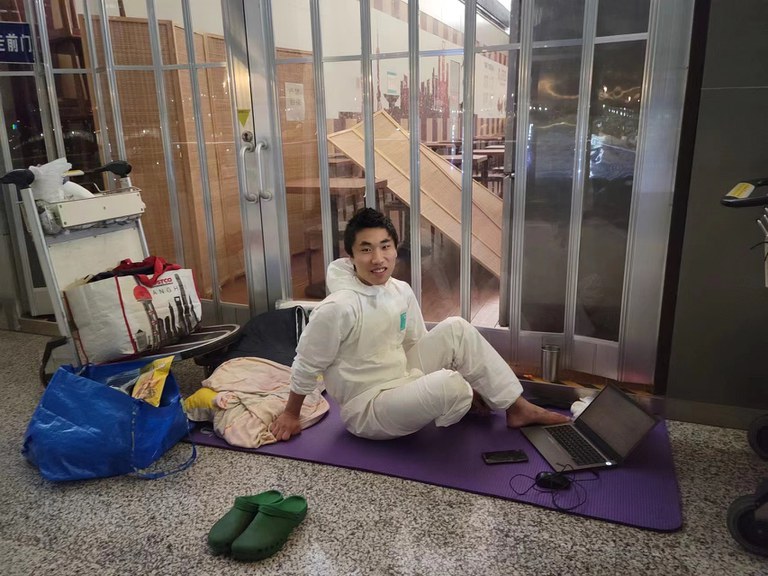 A Chinese citizen and former resident of Beijing who gave only the nickname Joseph took one look at the newly emerging COVID-19 restrictions in the Chinese capital, and decided he wanted no part of another lockdown like the one still under way in Shanghai. He spoke to RFA’s Mandarin Service about his roller-coaster exit from China.

RFA: Did you feel you were on the run?

Joseph: Of course I was on the run. I just escaped from Beijing. The Beijing authorities announced an eight-point rule on May 10, which seemed to imply that if a single person tested positive on your street, you and everyone else will immediately be barred from leaving town. When I saw that, I panicked, and said ‘that’s it. I’m running away’.

RFA: You had already postponed a planned trip to New Zealand — how hard was it to leave?

RFA: So even though you’d bought the ticket, you still didn’t know if you’d be able to get on the plane?

Joseph: Everyone has to just guess. I could see the daily departures and arrivals on an app, which showed that Pudong, Hongqiao, and Guangzhou airports, the hardest-hit areas. You can tell from looking at it that the departure rate [for scheduled flights] is less than one percent, so it’s a guessing game that you can’t win.

RFA: What did you do when your flight was canceled at Pudong International Airport?

Joseph: I had brought some food, some cooked food, as well as crackers and the like. I was ready for a bit of hardship. I looked for a place to spend the night, but these airports all have marble floors. I had brought a sleeping bag, but I wasn’t well prepared because the floor was cold. I was OK, but cold. I made it through the nights.

RFA: Was there no way to go anywhere else? You just had to stay at the airport?

Joseph: Yes, all of the routes were cut off, so it’s basically an island there. There was an old lady in her 70s who flew to New Zealand on the same plane as me. New Zealand required the PCR test results in English, so we took the bus together for her to get the English test results. The bus was a bit late getting back. She’d done a PCR test but the results weren’t back yet, and it had been more than 48 hours after her earlier test. She was stopped and prevented from entering the terminal building. She begged them, saying her luggage and food were inside, and that she would starve, but she wasn’t allowed in. I tried to put in a word for her, and they nearly dragged me away.

RFA: Were there other people in your situation?

Joseph: There was a college student next to me, a guy called He Siyuan who made the news a couple of days ago. It was broadcast on CCTV, and he slept next to me. The guy was very kind and very honest. He had been there more than 40 days, and I asked him how he was feeling. He said that it was quite bad at first, but that he had gradually gotten used to it. He said that he was worried at first, but now he is fine. He was barred from going back home by his neighborhood committee in Beijing, so he had no choice. He did a PCR test every two days at the airport, and every time it was negative.

It was incredible all the people in Area A of Terminal 2. There was a gentleman from Zhejiang who was in Wuhan during the lockdown. When that ended, he went to Shanghai, where he was caught up in the lockdown there. He got there on April, like the college student. He had wanted to fly to Wuhan, but couldn’t, so he was stranded [at the airport]. I was touched by what he did. He started picking up the moisture-proof mats and sleeping bags left by the passengers from April 1, and used them to built a platform that could sleep more than 20 people along one of the walls in Area A. He surrounded it with luggage carts, leaving an exit, making a temporary shelter. He didn’t charge people to go in and sleep there. He would let you in if you asked him, as long as there was a spot.

RFA: Where there any domestic flights leaving?

Joseph: Yes, but sometimes only one, and sometimes none. Nobody knew exactly where they would be flying too, and they’d often be canceled. There was only the bus to Hongqiao or downtown Shanghai, but none to other provinces. There was the high-speed rail, but it was very, very hard to get tickets for it, so hard that it wasn’t worth bothering.

RFA: What about international flights?

RFA: But people couldn’t actually get to Pudong Airport from Shanghai, could they? Some people were walking for 10 hours to get there.

Joseph: Because there are almost no buses, and the buses that were running were on odd schedules.

RFA: Didn’t you say that there was a bus from the airport to the city?

Joseph: Yes, but only going to the Southern Railway Station. It’s intended for rail passengers, and doesn’t serve residential areas.

RFA: Could people get on that bus at the Southern Railway Station?

Joseph: They may not have that information. Before I made the decision to go to Shanghai, I joined a group called Shanghai Outbound Information Exchange. If it wasn’t for their help, I wouldn’t have dared to go at all. I did’t want to have to walk for 10 hours. I tried calling the disease control and prevention hotline, and relevant party and government departments, but no one answered.

RFA: When you were at the airport, how did the people around you feel about these restrictions?

Joseph: All of the people around me said the same thing: they will never go back to Shanghai again, ever. One older guy from Shandong was even more vehement … he said he won’t go back in his next life either. He said he was heartbroken [at the way people were treated].