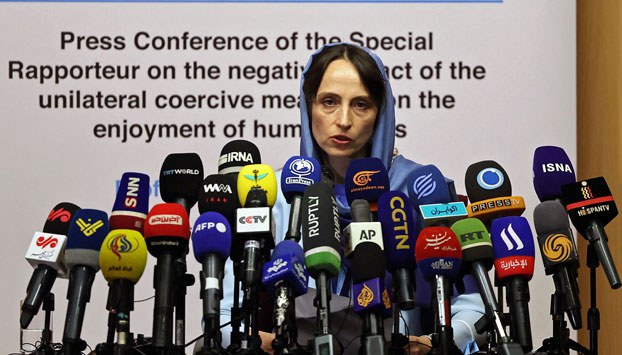 The U.N.’s human rights chief on Monday will begin a six-day official visit to China, including to the far-western Xinjiang region where widespread abuses against Uyghurs and other ethnic minorities at the hands of Chinese authorities are said to have occurred.

The trip is the culmination of years of effort by exiled Uyghurs to draw international attention to what they and independent researchers have said is a network of detention camps in Xinjiang.

While groups representing the community welcomed the announcement of the trip, they also expressed concern the team led by U.N. High Commissioner for Human Rights Michelle Bachelet will be kept from seeing the true picture of what is taking place in the region, including allegations of Uyghurs being used as forced labor at Chinese factories.

Bachelet’s May 23-28 visit will mark the first to China by a U.N. high commissioner for human rights since 2005. She plans to meet with high-level government levels, academics, and representatives from civil society groups and businesses during stops in Guangzhou — the capital of southern China’s Guangdong province where she plans to deliver a lecture to students at Guangzhou University — and in the Xinjiang cities of Urumqi (in Chinese, Wulumuqi) and Kashgar (Kashi), the press release said.

Bachelet, a former Chilean president, first announced that her office was seeking unfettered access to Xinjiang in September 2018, shortly after she took over her current role. But the trip was delayed over questions about her freedom of movement through the region.

Bachelet plans to issue a statement and hold a press conference at the end of the visit on May 28.

An advance team from her office arrived in China on April 25. They were quarantined in Guangzhou according to China’s COVID-19 protocols but met virtually with officials during that time. They later held in-person meetings and visits in Guangzhou and traveled to the Xinjiang Uyghur Autonomous Region (XUAR).

Linda Thomas-Greenfield, the U.S.’s top diplomat to the U.N., has joined with Uyghur advocacy groups and other human rights organizations in calling for China to give Bachelet unfettered access to Xinjiang to gather evidence of what’s taking place there.

Beijing has rejected all such claims as politically motivated attacks on its security and development policies in the vast western region. Beijing has called for a “friendly” visit by the U.N. rights official.

“We have repeatedly stated and expected that Commissioner Bachelet’s visit should be completely impartial with unfettered access to the concentration camps in the region,” Dolkun Isa, president of the World Uyghur Congress (WUC) in Germany, told RFA.

“Our current position is still the same; however, we’re deeply concerned because her trip seems to be not based on the expectations of the international community and wishes of Uyghur people but rather on China’s arrangements from our observations and the press statements of both U.N. and Chinese government,” he said. “If the trip is made under such circumstances, then China will take full advantage of Bachelet’s visit to whitewash the Uyghur genocide.”

‘A light to be shone’

Washington-based Campaign for Uyghurs (CFU) on Friday repeated the demands outlined by some 200 rights organizations that sent an open letter to Bachelet in March, calling for transparency in the visit, unfettered access to the region, and the publication of an overdue human rights report on Xinjiang.

Human Rights Watch, Amnesty International, WUC, CFU and Uyghur Human Rights Project were among the groups that signed the letter. They all have repeatedly raised alarm to Bachelet’s office about extreme measures taken by Chinese authorities since 2017 to eradicate the religion, culture and languages of Xinjiang’s ethnic groups.

A visit without unfettered access would support China’s long-standing narrative that there are no human rights violations occurring in the XUAR, CFU said.

“Commissioner Bachelet has delayed the release of her office’s report and her visit, extending the suffering of the Uyghur people and our wait for a light to be shone on China’s genocidal crimes in the largest global forum on Earth,” CFU’s executive director Rushan Abbas said in a statement.

Douhan, a Belarussian former professor of international law and U.N. special rapporteur focused on the negative effect of unilateral sanctions, received the money, according to disclosures in a U.N. filing, as she lent U.N. legitimacy to Chinese disinformation, including a regime-sponsored propaganda virtual event with the banner, “Xinjiang is a Wonderful Land,” UN Watch said in a statement on May 18.

Douhan appeared on the program in which Chen Xu, China’s ambassador to the U.N. in Geneva, said that people of all ethnic groups in Xinjiang live “a life of happiness.” The event also featured XUAR chairman Erkin Tuniyaz, who accused the U.S and other Western countries of concocting a “smear that the Xinjiang government deprives local ethnic workers’ fundamental rights.”

“It is clear that China is now willing to pay unprecedented sums of money to influence Alena Douhan’s U.N. human rights office, in wake of last year’s decision by the U.S., EU, U.K. and Canada to announce sanctions on China for its persecution of the Uyghurs,” Hillel Neuer, UN Watch’s executive director, said in the statement.

“A U.N. human rights investigator accepting money from China’s abuser regime would be like the Chicago Police Department receiving subsidies from Al Capone,” he said.

“Her taking $200,000 from the Chinese regime — as she works to promote their most dangerous propaganda — simply does not pass the smell test. She’s in breach of the UN’s most fundamental ethical principles,” Neuer added.

UN Watch called on Douhan to return the money immediately and to remove suspicions that a U.N. human rights expert is helping the Chinese to whitewash crimes against the Uyghurs. The group also urged U.N. Secretary-General António Guterres, Bachelet and Thomas-Greenfield to ensure that Douhan is held to account.

Translated by the Uyghur Service. Written in English by Roseanne Gerin.