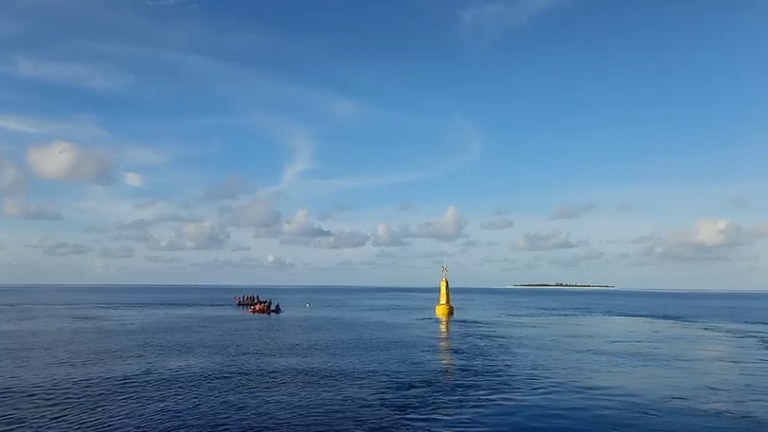 The Philippines has installed buoys and opened some command posts to mark out and assert its sovereignty in waters and islets it claims in the contested South China Sea, the country’s coast guard chief said Friday.

Abu hailed “the resounding success of installing our sovereign markers.”

On May 17, he said, the coast guard also established new command observation posts on Lawak, Likas, and Parola to boost Manila’s “maritime domain awareness” in the South China Sea, which Filipinos refer to as the West Philippine Sea, and is crisscrossed heavily by international vessels. An estimated $5 trillion in international trade transits through the waterway yearly.

Several Vietnamese and Chinese fishing boats, as well as China Coast Guard vessels, he noted, had been spotted in the vicinity of Pag-asa Island, the largest Philippine-held territory that houses a Filipino civilian community.

“The ships from Vietnam and China showed respect for the mission we undertook,” Abu said, adding that the Philippine Coast Guard boats were prepared to challenge the foreign vessels in case they interfered with the mission to install the navigational buoys and command posts.

In the past, China Coast Guard ships had blocked Philippine vessels on resupply missions to outposts manned by the Philippine Marines in the disputed waters. In November 2021, CCG ships fired water cannon toward Philippine supply boats, which were en route to Ayungin (Second Thomas) Shoal.

The lack of this capability was highlighted in recent years, when vessels from other claimant states in the maritime region, particularly from China and Vietnam, became more and more present in Philippine-claimed waters.

“These [outposts] will optimize the strategic deployment of PCG assets by monitoring the movement of merchant ships in its surrounding waters and communicating maritime incidents to the PCG National Headquarters [in Manila].”

Separately, the head of the Philippine Commission on Human Rights lauded the coast guard for its actions in “asserting the sovereignty of the Philippines over the disputed territories where China has constructed artificial islands and interfered with Filipino fishing activities.”

“No State should deprive our Filipino fisher folk from carrying out their livelihood in our national territories. The installation of navigational buoys is a notice to the rest of the international community that the Philippines is asserting sovereignty over the Kalayaan Island Group,” Jacqueline Ann de Guia, the commission’s chairwoman, said in a statement Friday.

Chinese coast guard vessels and fishing trawlers have, in recent years, also blockaded or limited Filipino fishermen’s access to their traditional fishing grounds in the South China Sea, such as Scarborough Shoal and the waters around Pag-asa.

On Friday, the embassies of China and other states with territorial claims in the sea did not immediately respond to requests from BenarNews for comment.

The Philippines, China, Brunei, Malaysia, Taiwan, and Vietnam each have territorial claims in the South China Sea. Indonesia does not count itself as a party to territorial disputes but has claims to South China Sea waters off the Natuna Islands.

A 2016 ruling by a tribunal of the Permanent Court of Arbitration affirmed Manila’s sovereign rights to a 200 nautical mile exclusive economic zone and an extended continental shelf, and declared Beijing’s sweeping claim to virtually the entire sea invalid under international law.

Beijing rejected the ruling and proceeded to occupy the waters with its vast flotilla of government and fishing vessels. The international community has urged China to comply with the ruling, as other claimant states have made efforts to assert their rights and deploy more of their own vessels to the disputed waters.

Marcos: On the way forward with China

The coast guard’s installation of the buoys and command observation posts occurred only days after the Philippine general election, in which Ferdinand Marcos Jr. won the presidential election in a landslide, according to an unofficial tally of votes.

On July 1, he will succeed President Rodrigo Duterte, who will be leaving office at the end of a constitutionally limited six-year term, during which he cultivated warmer bilateral ties with China and was seen as relatively soft on the issue of territorial disputes.

The installations also took place in the same week that Marcos had a “lengthy” telephone call with Chinese leader Xi Jinping, who congratulated him for his victory in the May 9 polls.

“We talked about the way forward for the China-Philippine relationship,” Marcos said in a statement on May 18. “So, it was very good, very substantial.”

Marcos, 64, is widely seen here as someone who would carry on with Duterte’s friendly policies towards Beijing over the maritime issue.

“I told him that in my view, the way forward is to expand our relationship, not only diplomatic, not only trade, but also in culture, even in education, even in knowledge, even in health to address whatever minor disagreements that we have right now,” Marcos said.

“And I told him that we must not allow what conflicts or difficulties we have now between our two countries to become historically important,” he said.