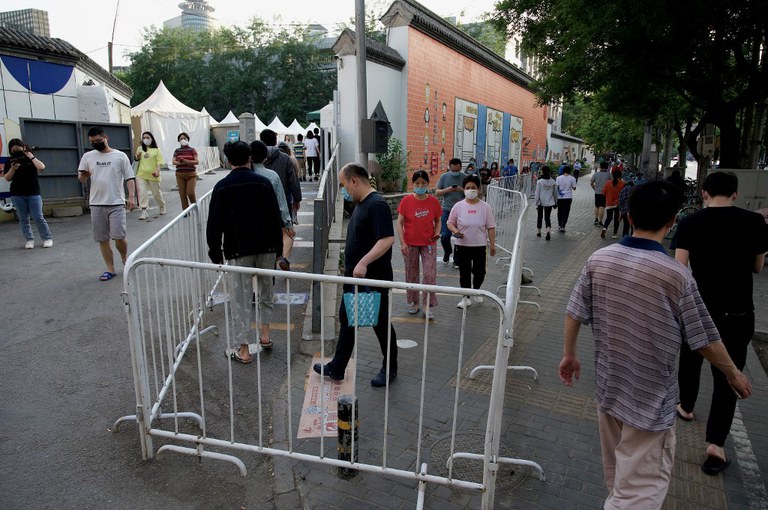 Authorities in Beijing are ramping up COVID-19 restrictions, while some residents of Shanghai said they were able to leave their apartments on brief trips outside on Friday.

Much of Chaoyang district in the eastern part of the Chinese capital was under lockdown on Friday, while 100 subway stations and 24 administrative districts in Fangshan district were locked down after 10 positive PCR tests among college students there.

The Beijing municipal health commission reported 64 newly discovered local cases of COVID-19 on Thursday, of which 10 were students at the Beijing Institute of Technology’s Fangshan campus.

While the authorities haven’t declared a lockdown, parts of the city are indeed in a locked-down state, a Fangshan resident surnamed Zhang told RFA.

“We’re locked down. There was a close contact in our building, so the entire building was locked in for 18, 19 days,” she said.

“They put seals on our doors and electronic dogs outside,” she said, in a reference to automated devices that call the police if people move outside of their apartments.

She said residents are now struggling to buy food.

“It’s not just that the street hawkers have gone out of business: we can’t get a hold of vegetables at all,” she said.

“Five chilli peppers now cost 12.9 yuan, when they used to be 2.5, or 3.5 yuan at most,” Zhang said. “Three small cabbages now cost nearly 13 yuan, while the price of cucumbers and potatoes has also gone up.”

Zhang Mingming, a spokesman for the ruling Chinese Communist Party (CCP)’s Fangshan district committee, said hundreds of students and faculty at the Beijing Institute of Technology campus and at the School of International Education are being transported out to compulsory isolation facilities.

As of Tuesday, Beijing had 15 high-risk areas and 32 medium-risk areas, with more than 100 subway stations closed to passengers.

Since May 1, anyone entering public places has to show a recent, negative PCR test taken in the past 48 hours.

“You need a negative PCR to get into the park; this is an open space,” a local film-maker told RFA. “I don’t know why.”

PCR testing companies have been the target of widespread public anger on Chinese social media for profiteering on the back of mass, compulsory testing.

The film-maker said: “A lot of people think it’s the government, but most of the money is going to the [medical] insurance industry.”

Photos posted to social media showed Beijing residents trying to eke a living by setting up makeshift roadside stalls, while some roast duck restaurants started hawking roast duck by the side of the street.

Meanwhile, in Shanghai, residents are slowly being allowed out to resume some daily activities.

“They say today that lockdown will be lifted tomorrow, but when it’s tomorrow, they say businesses will stay open every day starting from the day after tomorrow,” a resident of Pudong district surnamed Fang told RFA. “I have no idea which is the true statement.”

“A lot of people are waiting to get passes to leave our residential compound, but they haven’t been issued yet,” she said. “The neighborhood committee put out a list, but our compound wasn’t on it.”

“There have been no positive tests in our compound for more than two weeks, but they still won’t let us out,” Fang said. “They’ve done 30 or 40 PCR tests on every person here, but it’s still not over.”

Some workers in Shanghai are being allowed to travel between work and home only, in a “point-to-point” arrangement.

But the move could be too late for many companies, which have been bankrupted by the CCP’s zero-COVID policy, with widespread mass layoffs of pre-lockdown staff.

Mass layoffs have been predicted at major factories as well as at small and medium-sized businesses, amid a spike in departures via Shanghai’s Hongqiao Railway Station, as newly unemployed migrants finally leave the city.

Shanghai worker Zhang Wandi, said many companies have been hit with rental payments and salaries through lockdown, but with no income to fund them.

“Currently, commercial rent deposits in Shanghai are generally three months’ rent … but nobody has paid their rent lately because they’re all waiting for government subsidies,” Zhang said. “I think a lot of companies are just going to go out of business when lockdown ends.”

“The thing they fear most is layoffs at big companies,” Li said. “The economy is not a car, to be driven with one foot on the brake and the other on the gas; it’s more like a plane, where the plane loses height when you slow it down, and you have to take off again.”

“To do that, you have to  have a runway, taxiing and acceleration, and the disease control and prevention measures have hit China’s economy hard,” he said.