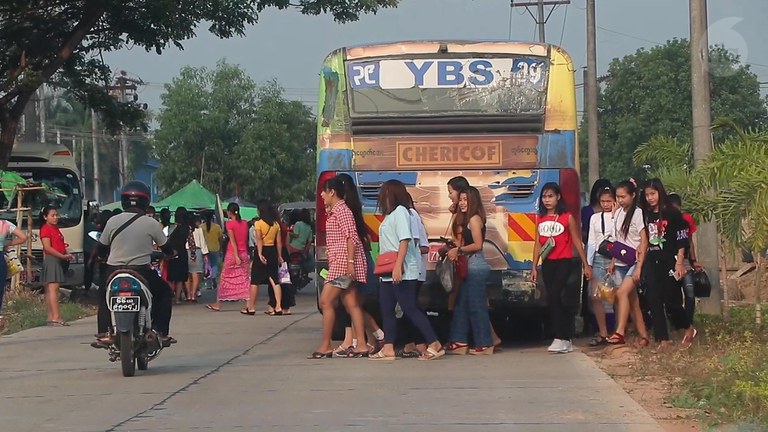 Thu Thu, a 37-year-old laborer living in Shwepyithar township on the outskirts of Myanmar’s commercial capital Yangon, has been trying to find work at one of the Industrial Zone’s garment factories for more than two weeks with no luck. Using a pseudonym, she told RFA’s Myanmar Service that she was unlawfully terminated from her job nearly a month ago and needs to care for her elderly parents and two daughters but said no one wants to hire a woman over the age of 30.

“Before, under the [civilian National League for Democracy government], employers hired based on a person’s skills. Now, under junta rule, they tend to look at age and they reject me after they see how old I am on my ID card,” she said.

“I am facing severe hardship trying to support my family. Sometimes, to speak truthfully, I even consider taking my own life.”

She said she now works odd jobs to make ends meet but questioned how much longer she will be able to manage with few prospects of employment.

Thu Thu is just one of around 1,000 laborers trying to find work in the Shwepyithar Industrial Zone, a key component of Myanmar’s U.S. $3.4 billion textile sector. According to the Confederation of Trade Unions of Myanmar, there are over 500,000 textile workers in the Yangon region alone.

However, job opportunities – even in the country’s once bustling cities – are drying up. The International Labor Organisation (ILO) estimates that more than 1.6 million workers, or nearly 3 percent of Myanmar’s population of around 54 million, lost their jobs last year due to the coronavirus pandemic and the political upheaval that followed the Feb. 1, 2021 military coup.

According to the Myanmar Garment Factory Entrepreneurs Association, only 504 of 759 factories in Yangon are currently operating.

Those workers in the Shwepyithar Industrial Zone who still have their jobs said they receive a fixed wage of 4,800 kyats (U.S. $2.60) per day and can no longer work for overtime pay because electricity shortages prevent their factories from operating at full capacity.

Other baseline worker benefits have also disappeared in the wake of the coup. Garment worker Su Su Aung told RFA that since the takeover, factory owners have stopped providing medical leave to their employees and instead require that they sign documents agreeing to have their status downgraded following any absences.

“We used to be able to take impromptu leave for sickness or take medical leave, but we can no longer do that. If we take leave for a day or two because of an emergency, they reduce our pay grade or skip our bonuses,” she said.

“We never experienced these kinds of conditions before. When we appealed to them to keep the old policies in place, they threatened us and said no one would listen to our complaints, so we are forced to work under these conditions.”

A garment factory worker of seven years’ experience, who declined to be named citing fear of reprisal, said years of labor rights reforms under the NLD government were rolled back seemingly overnight by the coup.

“Employers have become more self-centered. There is no rule of law, so they can do whatever they want, knowing that the workers will keep silent because we need the money,” she said.

“They think they are entitled to hire and fire people whenever they want. It’s like a living hell for us. We can only hope that someone will emerge who can make our lives better.”

Zin Wai Aung, a volunteer who assists workers, said he is receiving an increasing number of complaints about getting fired.

“We get two or three cases each day – most of them are for being terminated from work. Many workers get unpaid time off for 20 days and are to come back to work for ten days on regular basis. They no longer have full-time jobs, but they aren’t getting fired either,” he said.

“In addition, we have seen many workers getting fired unlawfully, for complaining to their manager or requesting leave or holidays.”

An owner of a garment factory that employs nearly 250 people told RFA that workers deserve someone to stand up for them in negotiating their rights.

“It is normal to see disputes between workers and employers. We are trying to resolve them on both sides and things are getting better,” he said.

But the owner added that after the coup, the labor situation in Myanmar “returned to square one,” leaving workers little protection of their rights.

Workers who spoke to RFA echoed the owner’s sentiments, noting that the unions which represented them in disputes under the NLD government had largely disbanded after the takeover because they were being targeted by the military regime.

Late last month, the ILO said it plans to investigate whether Myanmar is following conventions its government agreed to on the formation of worker unions and banning forced labor, but the junta has objected to the announcement.