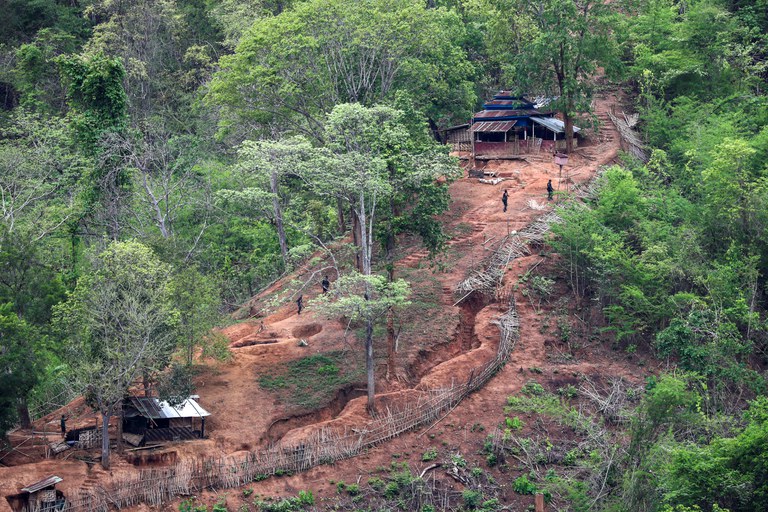 Myanmar junta chief, Snr. Gen. Min Aung Hlaing, on Friday offered to meet with leaders of armed ethnic groups to end conflict in the country’s remote border regions but was met with a mixed response from the armies, who said the military has broken vows in the past and needs to deliver on promises of peace.

The offer also was not extended to representatives of the country’s ousted, democratically elected government and the prodemocracy People’s Defense Forces that sprang up in an effort to return it to power.

“I have said that 2022 is the year of peace and that we will work for an end to all armed conflict in the country,” he said in a speech broadcast on state-run television.

“I call on the leaders of the ethnic armed groups to meet and negotiate, as peace needs to be implemented in practice. I will meet all the groups in person and later talks could be held with a delegation made up of members of the [junta].”

Min Aung Hlaing proposed that the meeting include the heads of each ethnic army and two of their lieutenants — the names of whom should be submitted by May 9. He said a date would be set for full talks after the initial meeting.

“We fully guarantee the safety of the people who will be attending the talks, and the [junta] will pick them up wherever they feel comfortable … and bring them in [for the meeting].”

He said China had also agreed to help broker the peace process and that the junta is willing to work with all stakeholders.

Col. Khun Okkar, the leader of the Pa-O National Liberation Organization (PNLO), told RFA he believes the junta is determined to work for peace in the run-up to a general election, and suggested Min Aung Hlaing proposed the meeting to “find a way to stabilize the country.”

At the time of Myanmar’s Feb. 1, 2021, coup, Min Aung Hlaing promised elections within a year, but he has since pushed the date back to August 2023. More recently, the junta has said elections would only be held if there is “stability” in the country.

Khun Okkar said that by proposing the talks on television, Min Aung Hlaing was likely trying to bypass the red tape required to get talks started.

“There’s too much centralization. … There are a lot of steps and sometimes things don’t get to the point in time,” he said.

“It seems he wanted to be more effective when he said he would take charge himself. Time is running out … and as he needs time to prepare for the elections, I think he wanted to have the talks as quickly as possible.”

Padoh Saw Tawney, foreign affairs officer for the Karen National Union (KNU), said past experiences with the peace process have raised doubts within his group about the military’s tactics.

“We have never rejected peace, but peace cannot be achieved with words only. So, we need them to show us real facts and actions that can lead to peace,” he said.

“Without these, we cannot accept any offers — even if he meets with us personally. … We have taken part [in previous peace talks] and we know every little trick they use. So, there cannot be peace talks without accepting our conditions,” he added, without providing details.

Political ‘act’ in response to pressure

Sai Kyi Zin Soe, a Myanmar-based political analyst, called Min Aung Hlaing’s call for peace “useless” and suggested it was a political act to alleviate international pressure over the junta’s brutal repression of its opponents. According to rights groups, security forces have killed 1,782 civilians and arrested nearly 103,000 since the coup, mostly during peaceful anti-junta protests.

Proper peace talks cannot be held without all stakeholders, Sai Kyi Zin Soe said, and must also include the country’s shadow National Unity Government (NUG), prodemocracy People’s Defense Force (PDF) paramilitaries, and other opposition forces. The junta has ruled out talks with the groups, which it accuses of terrorism.

“The path he is taking and the work he is doing is just a figurative demonstration of a desire for real political stability,” he said.

“[Failing to include groups beyond the ethnic armies] shows he’s making the offer because of pressure from China or ASEAN amid international criticism, rather than out of a genuine desire for real peace.”

Ye Tun, a former member of parliament with the deposed National League for Democracy (NLD), said he believes Min Aung Hlaing may be trying to “keep the ethnic armed groups in check” until he can eliminate the PDF and other armed opposition groups.

Ethnic armies have been fighting against Myanmar’s military since the country’s 1948 independence. In the aftermath of the coup, several groups have thrown their support behind anti-junta resistance fighters, while others are joining forces with the local PDF branches to fight the military.

Only 10 ethnic armies have signed a Nationwide Ceasefire Agreement with the government since 2015, when the document was inked in the presence of international observers and Myanmar’s highest legislature.

The 10 groups have suggested that the deal remains in place, despite an already flailing peace process that was all but destroyed by the unpopular junta’s coup. However, they say they will not pursue talks with the military, which they view as having stolen power from the country’s democratically elected government.

While the junta has made peace overtures to the ethnic armies in the past, Friday marked the first time Min Aung Hlaing offered to meet with them in person.