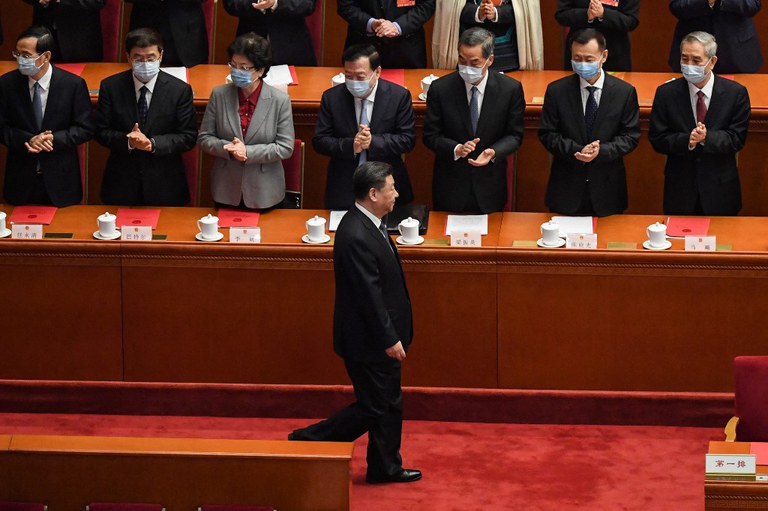 The ruling Chinese Communist Party (CCP) is calling for ‘opinions’ from citizens ahead of a crucial political meeting later this year, amid growing public anger over CCP leader Xi Jinping’s COVID-19 policy, that has seen millions confined in grueling lockdowns across the country in recent months.

From April 15 through May 16, the anniversary of the start of the Cultural Revolution (1966-1967) when late supreme leader Mao Zedong began a purge of his political rivals within party ranks, people can submit their “opinions and suggestions” online, including via the CCP’s official People’s Daily newspaper, Xinhua and the China Media Group, it said.

“Opinions expressed online will be collected, analyzed and then provided as a reference to the drafting of the report of the 20th national congress, and some of the common problems raised by netizens will be dealt with immediately or assigned to responsible departments for further research,” the paper said, citing “analysts.”

The move is intended to boost the CCP’ public image as confident, open, honest and innovative, it said.

The People’s Daily said it received more than 10,000 submissions within the first 12 hours of launching the page.

Submissions must be made under eight categories, many of which are ideological rather than factual, and include subjects like “developing the people’s whole-process democracy,” a Xi Jinping buzzword for public consultation under an authoritarian system, as well as “improving people’s livelihoods,” and “strengthening and upholding party leadership.”

Deng Yuwen, a former newspaper editor for a CCP party school publication, said calls for public consultation aren’t uncommon in China’s political system, but that there are strict, unwritten rules about what kind of opinions are acceptable.

“You can only talk about things that related to your personal situation, such as raising retirement benefits a little,” Deng said. “[These are the] so-called vital interests.”

“Other topics can’t be raised at all and people know not to mention them,” he said, adding: “Asking for some opinions online doesn’t represent a particularly noteworthy change.”

According to the submission page on the People’s Daily website seen by RFA on April 21, people submitting comments and suggestions must supply their real names, their employer’s name, their rank or job title, political status, age and geographical location.

Mobile numbers must also be supplied, so that submissions can be verified with an SMS code, meaning that anonymous submissions aren’t an option.

The submissions already visible on the People’s Daily page tended to point in the same direction as published government policy, rather than challenging anything.

Chen Kuide, executive chairman of the Princeton Chinese Society in the United States, said all submissions will be subject to strict review, and that critical or challenging comments would never make it as far as Xi himself.

“The authorities can only tolerate opinions on fairly marginal, mundane and innocuous issues,” Chen told RFA. “But when it comes to issues linked to Xi Jinping’s political survival, like the zero-COVID policy, China’s relationship with Russia and the U.S. or Taiwan, there can be no opinions opposing CCP policy or Xi Jinping’s own view.”

Wang Dan, a former leader of the 1989 student-led democracy movement in China and the founder of the Dialogue China think-tank, said the zero-COVID strategy alone could mean there is a political crisis brewing for Xi, who will seek an unprecedented third term in office at the 20th Party Congress.

“Shanghai, where life became unbearable overnight, will make many people see the grim reality, [people] who used to go about thinking they could live a peaceful life without getting involved in politics,” Wang said. “When this crisis happened, they will realize that politics will come to you.”

“People are facing the risk of starvation, or arrests and beatings, even in the richest districts of Shanghai,” he said. “All of this … will make the middle classes — once the biggest supporters of CCP policies — totally lose any confidence in China’s future.”

He said most of Generation Z in China will likely feel abandoned both by society and the economy in the aftermath of the pandemic.

“Once they wake up to this, the sense of resistance will be very strong … [and] that kind of crisis will be far more deadly to the CCP than the pandemic,” Wang said.

Veteran Democracy Wall dissident Wei Jingsheng agreed, adding that Xi’s political ideology is unlikely to give way easily in the face of anger and resentment, as his thinking was molded by the chaotic factional strife of the Cultural Revolution (1966-1976).

“Comrade Xi Jinping grew up in that era, and his basic notions were formed then: his head was full of pseudoscience, his thinking full of arrogance, superstition, violence and other absurdities,” Wei wrote in a recent commentary.

“This is the ideological source of his insistence on the absurd zero-COVID policy today.”

Wei said Xi would have been regularly exposed to violent propaganda in his youth, and had likely developed a taste for violent oppression, which Wei said was akin to Stockholm Syndrome.

Wei warned that it would be hard to mount a determined political resistance to Xi, however, despite widespread public anger.

“He has a large number of people who are as sick as him, who were also affected by the Cultural Revolution and who think he is right, supporting and helping him,” Wei said. “Otherwise, he would never have been able to put his absurd ideas into practice.”